Lake Tahoe is known for its beautiful blue waters and remarkable transparency. But its clarity is threatened by climate change and urbanization — and billions of tiny invasive shrimp.

Researchers at the UC Davis Tahoe Environmental Research Center are dedicated to investigating the many factors facing the lake today, collaborating on solutions and educating the public.

According to the most recent Tahoe: State of the Lake report, published yearly to present data in the context of the long-term record, efforts to restore clarity have been directed at mitigating the impacts of land-use practices and urbanization. But researchers have recently identified Mysis shrimp as a previously unconsidered major cause of clarity decline in Lake Tahoe.

“I am now totally convinced that the Mysis are the major cause of the problem, and controlling their numbers is the solution,” said Geoffrey Schladow, director of UC Davis TERC and a professor in the College of Engineering.

Now TERC, in collaboration with students from the UC Davis Graduate School of Management, is seeking a way to reverse the damage the shrimp have caused. Could a program to remove Mysis rapidly improve the clarity of Lake Tahoe? And could this be done efficiently and be financially beneficial? 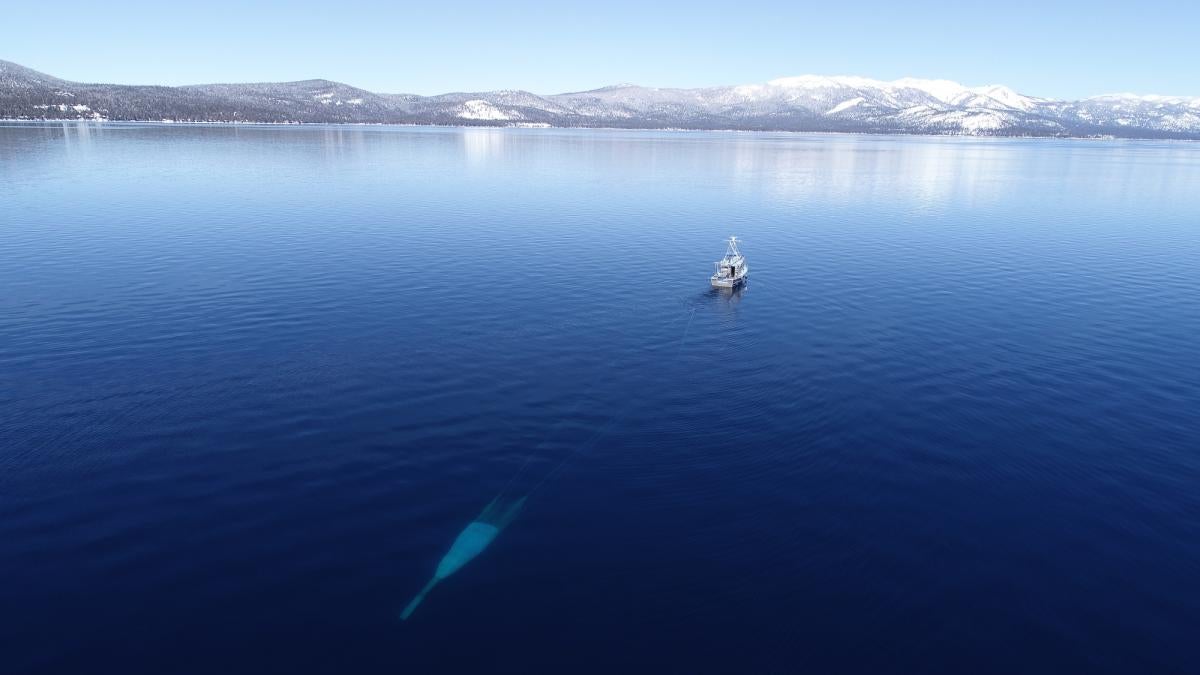 Billions of invasive Mysis shrimp, introduced in the 1960s as a food source for native trout, live in Lake Tahoe, where they have almost eaten to extinction the native zooplankton that historically helped keep the lake blue and clear.

“It always bothered me that solutions to aquatic problems were purely land-based, when it was well-known that the entire aquatic ecosystem had been altered by invasive species,” said Brant Allen, TERC biologist.

TERC researchers have spent many late nights trawling for shrimp as part of a two-year pilot project — now nearly finished — to find an effective means of removing enough Mysis shrimp to make a difference in the lake’s clarity.

So far, results have yielded baseline data to establish when and how to harvest the Mysis, the level of efficiency needed, and the hands-on experience of what it would entail, said Schladow. The center also is refining its methods for achieving harvesting efficiency and seeking capital investment.

Using a commercial trawler, TERC researchers now know how to reduce the Mysis numbers to the point where the beneficial zooplankton could return. But the solution creates another problem: It’s costly and then they need to find something to do with the gathered shrimp. 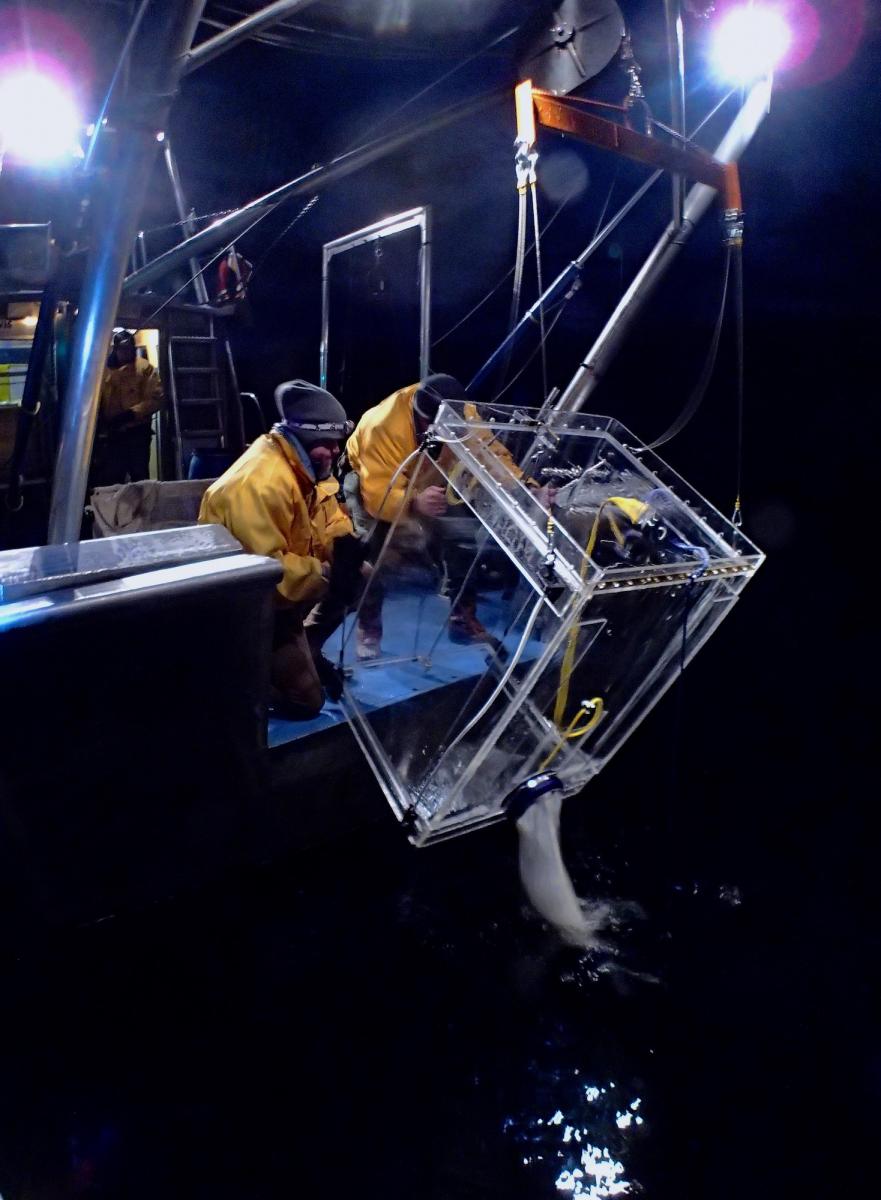 Enter students at the UC Davis Graduate School of Management.

Could they help find a marketable use for the tiny shrimp and also generate revenue from their removal?

For their capstone project, second-year MBA students are linked with client sponsors to solve real-world issues over a 10-week academic quarter. The Integrated Management Project gives students practical, hands-on experience working in partnership with diverse organizations. Previous clients include IBM, the Sacramento Kings, PG&E and the city of Sacramento.

Collaborating with TERC as the client this fall, a team of six M.B.A. students sought to investigate the market potential for the shrimp with an eye toward generating awareness of invasive species and revenue to help fund their removal.

“This project allows us to put into practice the concepts that we’ve been learning over time,” said Megann Kerr, a second-year M.B.A. student. “And I liked working on something that had environmental significance.”

To begin, the student team investigated the problem, spoke with experts and weighed potential options.

The team looked at the market for the shrimp, which included fish food, human supplements and pet food.

In the end, they landed on the premium dog treat market. In the U.S. alone, pet treats account for almost $7 billion in sales per year.

“Because so many people own dogs and love talking about their dogs, we thought that’s where we could generate the most awareness,” said Yuan Cheng, a second-year M.B.A. student, who now leads the project. “We could eventually branch out into other things, but we tried to focus on one initial go-to-market product.”

The students conducted a survey of dog owners to better understand the market potential. They asked about what dog owners look for in treats and willingness to pay a premium for products with an environmental benefit.

From the survey, they found two primary segments of people who would be most interested in such a product: purpose-driven millennials and older folks with more disposable income. The caveat? The dog must really like it.

“You still need to make a really great product,” said Cheng. “Assuming you have parity on all the other levels, then yes, people will pay a small premium for it.” 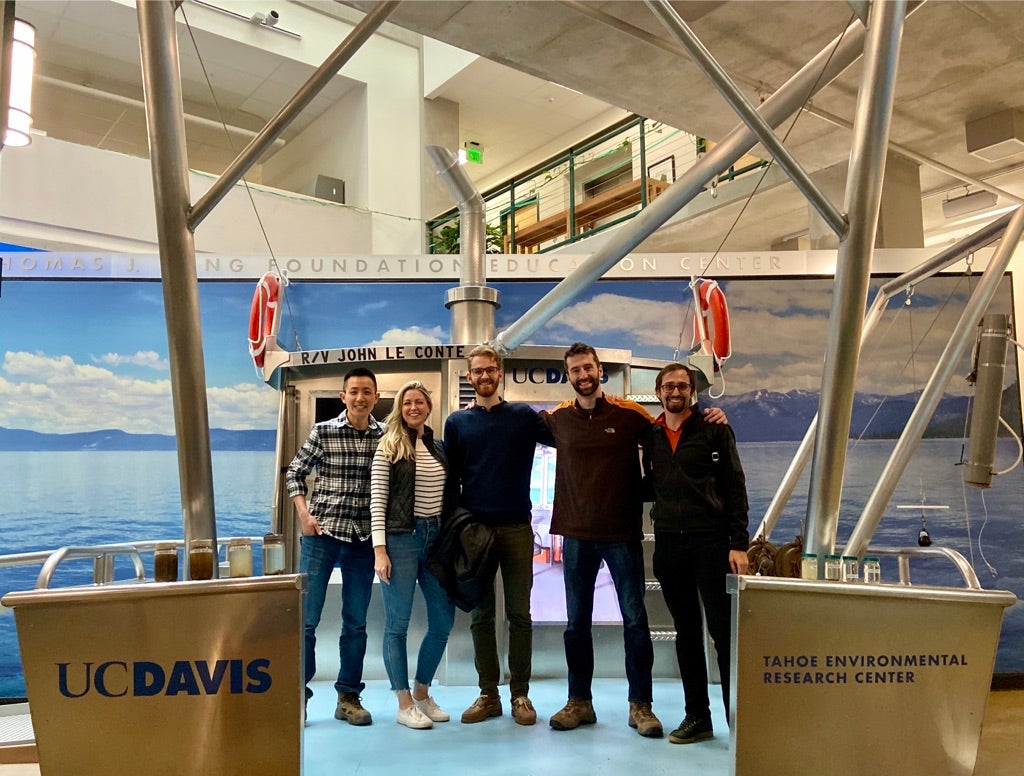 And though the academic quarter ended, plans are underway to create a self-sustained nonprofit, in which revenues ultimately cover the cost of removing the shrimp from the lake.

“It’s a powerful image of using science to both cure a problem (ironically caused by poor science 50 years ago) and to capitalize on the solution,” said Schladow.

Cheng is now building a team that will drive next steps on testing, food safety and product development. Schladow will also be closely involved.

Fund raising is set to start in July. A possible Kickstarter campaign would communicate the value of the project to potential backers.

If all goes according to plan, the team would start with a pilot project in Emerald Bay in June 2021. Then, TERC researchers could monitor improvement and direct any efforts to scale up the project to the entire lake. 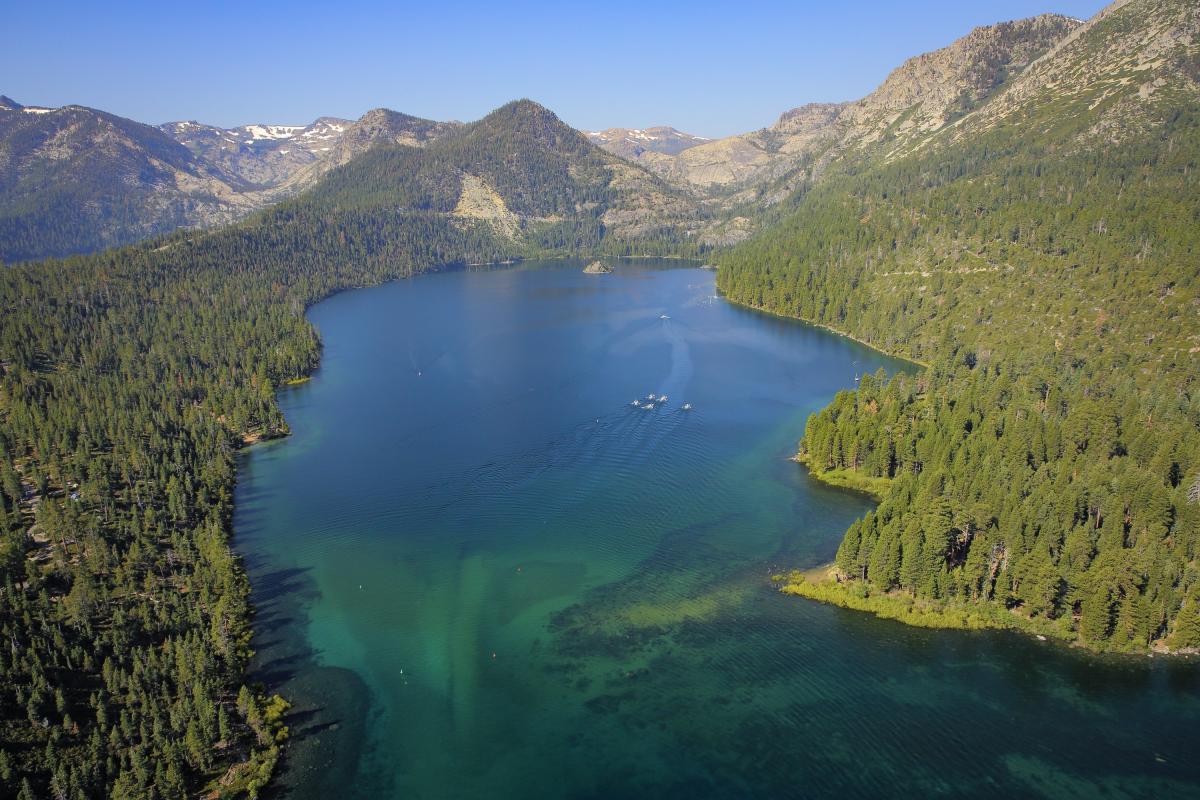 Of course, success would mean that shrimp are removed from the lake.

“It’s a business designed to put ourselves out of business,” said Cheng, noting the goal is to reduce the Mysis population density down to 27 individuals per square meter as full removal is impossible. Eventually, he added, they could move their operations to other lakes where the Mysis are a problem.

Not every Integrated Management Project gains enough momentum to move on to implementation. And team members said the experience is invaluable to their development of analytical and leadership skills.

“The collaborative aspect was amazing,” said Cheng. “The amount of expertise available to us was so helpful and validated how awesome it is at UC Davis to have all these resources in one spot.”

And not every project has the potential to make a real difference in a 2-million-year-old lake. But Schladow said removing the Mysis shrimp from Lake Tahoe could mean increasing the clarity to levels not seen in decades, and in the process it could potentially “climate proof” the clarity of the lake.

“The impact on Tahoe is huge, as clarity here is what symbolizes the lake,” said Schladow. “I believe that many of the other issues at Tahoe have a connection to the loss of clarity. These would include the spread of invasive plants and fish. If they show improvement at the same time, then it is likely that the entire native food web will start to restore itself.” 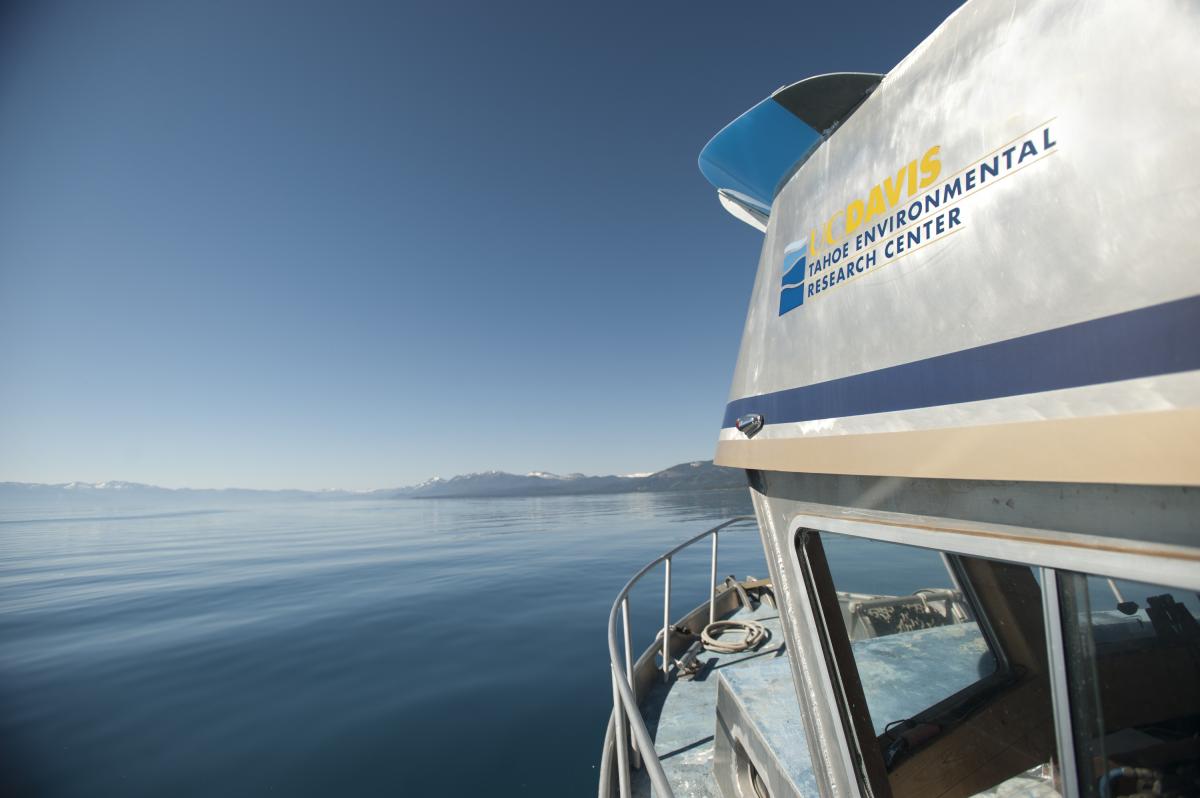 “In the whole world, if you are Syrian, you have nothing. You have no rights. You have no life,” Kaysaneya said, in English. “I lived a life, and it’s not the one I was dreaming about.”

From Molecules to Minds

Vastly more advanced than any supercomputer, the complexity and versatility of the human brain is awe-inspiring. How do we map the mind?

After years of surviving in isolation on the Santa Cruz islands, this horse breed is teetering on the brink of extinction.

Tough commute? Imagine driving it on roads of dirt or gravel.