The average annual clarity level for 2017 was 59.7 feet. This was a 9.5-foot decrease from the previous year, surpassing the previous lowest value of 64.1 feet in 1997. Mid-lake clarity levels can swing widely from season to season and year to year, and the five-year average lake clarity is approximately 70 feet.

“In 2017, Lake Tahoe’s low clarity was primarily the result of two extreme climatic and hydrologic events — a perfect storm, so to speak,” said TERC Director Geoffrey Schladow, a professor of engineering at UC Davis. “The combination of arguably the most extreme drought period ending with the most extreme precipitation year produced the low clarity values seen. Measurements for 2018 have already shown a large improvement that are more in line with the long-term trend.” 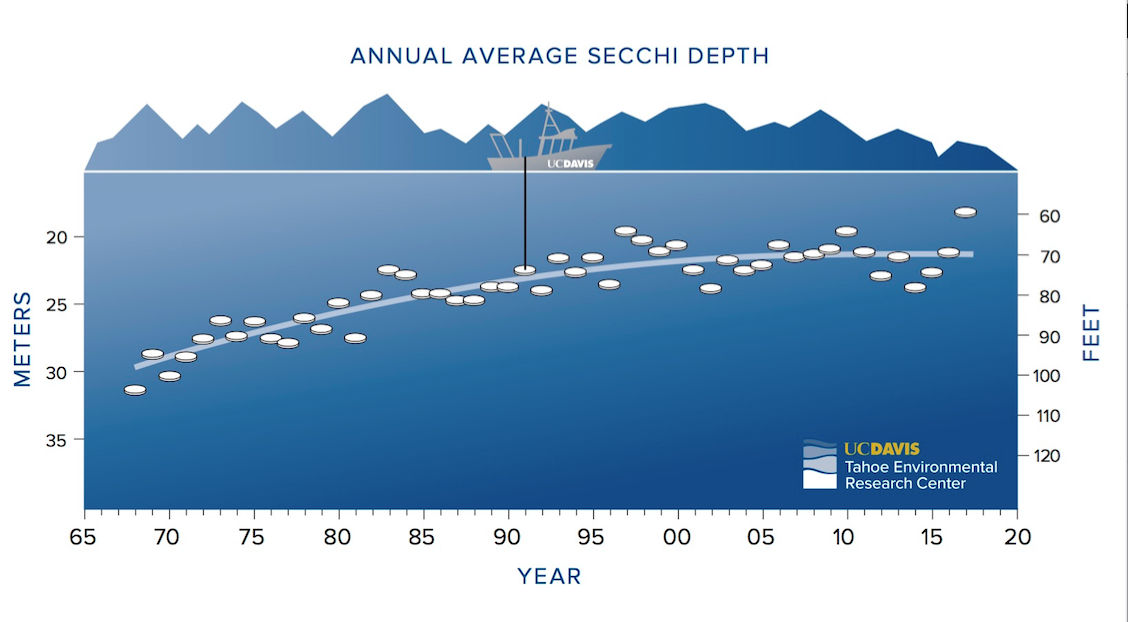 Clarity is typically at its worst in the summer, and tends to improve during the fall and winter months. In 2017, a year when nearly every corner of the globe experienced extreme weather events, that pattern diverged with the worst clarity extending through the fall.

Clarity values through mid-March were better than in many recent years. However, they failed to improve during fall and winter. Water Year 2017 (October 2016-September 2017) was California’s second wettest and Nevada’s seventh wettest in a 122-year record, with the Tahoe Basin seeing up to 300 percent of its normal precipitation. An additional early winter storm in November 2017 added an unusual amount of sediment that impacted fall clarity.

Most of the sediment load in the low-clarity year of 1997 came in January with the peak flow. But 2017 produced a far greater load of sediment than the lake experienced in 1997, and those loads came more frequently throughout the year.

The year 2017 marked the end of the California’s worst drought in at least 1,200 years, followed by one of the wettest winters on record, when more than 50 atmospheric rivers emptied over the region.

In 2017, heavy rains flushed sediment that had been accumulating in streambeds for five years during the drought into the lake. Algal concentrations have been shown to reduce clarity in past years, but those were not significantly higher in 2017 than in other years. This indicates that sediment particles were likely responsible for the overall clarity decline.

Clarity is measured as the depth to which a 10-inch white disk, called a Secchi disk, remains visible when lowered into the water. In 2017, 26 individual Secchi depth readings were taken from January through December. The highest value recorded in 2017 was 90.2 feet on March 9, and the lowest was 47.6 feet on Oct. 17 and Dec. 19.

Summer temperatures in 2017 were the warmest on record at Lake Tahoe, almost 3 degrees Fahrenheit higher than in the previous three years. Unusually low wind speeds in July and August caused elevated water temperatures to extend into September, later than normal for the lake. Past research has predicted that warming lake temperatures would hold fine sediment particles closer to the surface longer, reducing clarity.

Schladow said that while anomalous years such as 2017 can at first appear alarming, they serve the important role of teaching us where future research is required to build resilience to climate change.

Dozens of public and private partners at Lake Tahoe are working to reduce stormwater pollution from roads and urban areas and to restore streams to prevent erosion that harms lake clarity. Partners are also working to restore natural wetlands and meadows that were displaced by past development and play an important role in filtering water before it enters the lake.

That work is keeping tens of thousands of pounds of fine sediment particle pollution out of Lake Tahoe each year, and the lake has been responding with an improved clarity trend over the past 20 years. The goal is to restore lake clarity back to its historic level of nearly 100 feet.

“Scientific research has predicted a changing climate could affect lake processes, and this likely means we can expect more swings in clarity from year to year,” said Joanne S. Marchetta, executive director of the Tahoe Regional Planning Agency, which funded the analysis. “In response, we’ve been accelerating our investments in projects to bolster resiliency to emerging threats like extreme weather. It’s important to continue to make those smart investments for the long-term health of the lake and its environment.”

In May, UC Davis researchers acquired an autonomous underwater vehicle that can literally delve deeper into understanding Lake Tahoe’s scientific processes as it maps and takes samples near the bottom of the lake. It previously was used by UC Davis engineering professor Alex Forrest to study ice shelves in Antarctica, among other projects. It joins another recent addition, an underwater robotic glider that can move up and down the water column for months at a time.

These instruments add to TERC’s scientific toolbox of nearshore and remote sensors, NASA buoys, research vessels and manual sampling in the ongoing effort to more thoroughly analyze and measure parts of the lake rarely explored throughout the year, during a variety of weather conditions.