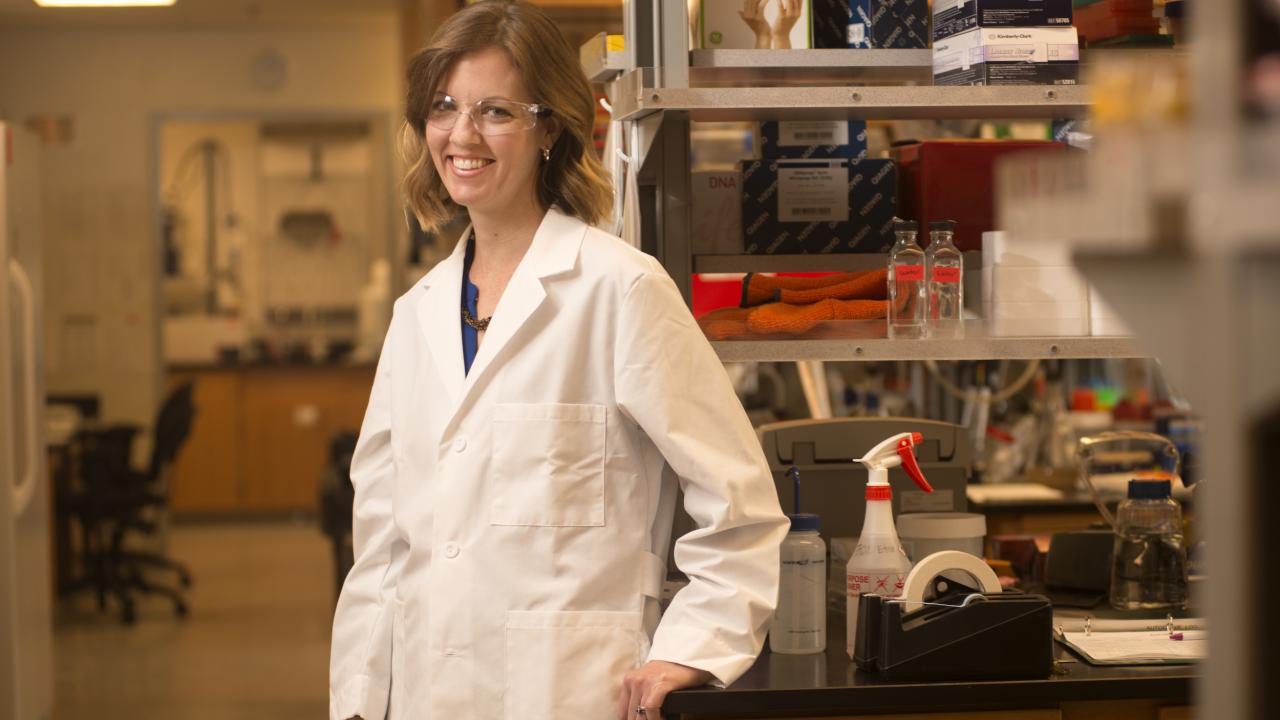 A University of California, Davis, microbiologist who studies how a parasitic amoeba kills cells has been named as a 2016 Pew scholar in the biomedical sciences by the Pew Charitable Trusts. The scholarship program provides funding to outstanding young scholars working to advance human health.

“I’m excited and honored to be joining the Pew scholars,” said Katherine Ralston, assistant professor in the Department of Microbiology and Molecular Genetics, College of Biological Sciences. “I feel very indebted to all the mentors who helped me reach this point, and I think part of my job now is to reinvest that mentorship in my own trainees and give that back.”

Ralston is one of 22 early-career scientists in the 2016 class of Pew scholars. Each will receive four years of funding to pursue foundational, innovative research.

“In the College of Biological Sciences we are thrilled that Dr. Ralston is being recognized as a Pew scholar. Her research on the mechanisms whereby cells eat other cells is groundbreaking and has major implications for a variety of health topics,” said Peter Wainwright, dean of the college.

Ralston works on Entamoeba histolytica, which causes severe diarrheal disease mostly in tropical developing countries. The parasite lives in the human intestine, causing ulcers and bleeding. In rare cases it can break out of the gut and make its way to the liver, lungs or brain.

The name “histolytica” means “tissue-dissolving,” because it was thought that the amoeba makes a toxin that destroys tissue. Ralston, however, discovered something quite different.

There are hundreds of species of amoebae, and they are known to consume food by engulfing it, a process called phagocytosis or “cell-eating.” During postdoctoral work at the University of Virginia, Ralston discovered that instead of engulfing another cell whole, Entamoeba histolytica can “nibble” on other cells, taking a series of small bites that have the effect of killing the other cell. This new process is called “trogocytosis,” or “cell nibbling.”

This new process appears to be how Entamoeba attacks and kills cells in the human intestine, creating ulcers and sometimes attacking other organs. If we can learn more about the process, we might be able to interfere with it and prevent disease, Ralston said.

Ralston will use the support of the Pew scholarship to further study of this process, including figuring out exactly how a cell takes a bite, and why the attacked cell dies after a certain number of bites.

Intriguingly, there’s evidence that many other cells — including white blood cells in our immune system — use a less extreme form of “cell nibbling” as a way to exchange information with each other.

“We’re pretty excited that this is a fundamental process that these pathogenic amoebae exploit in an exaggerated way to kill other cells,” Ralston said.

Ralston earned her bachelor’s degree in genetics from UC Davis in 2001, and her Ph.D. from UCLA. She carried out postdoctoral research at the University of Virginia before joining the faculty at the UC Davis College of Biological Sciences in 2014.