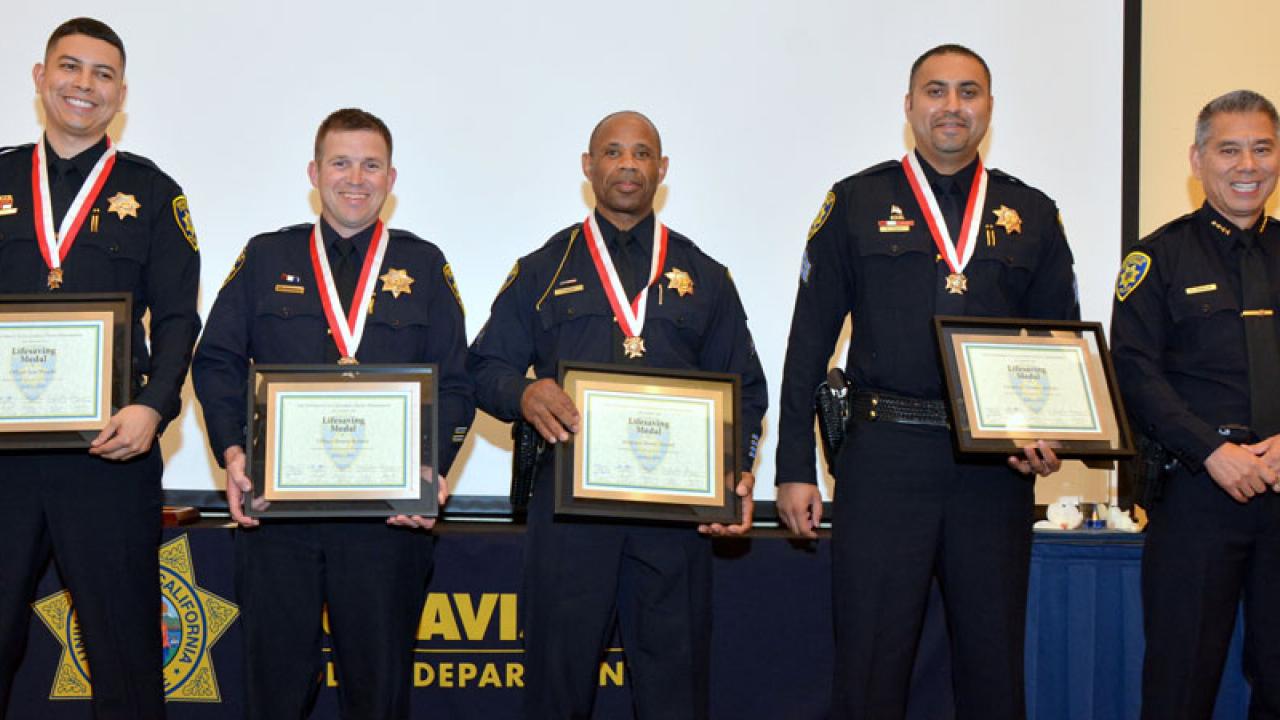 4 Lifesaving Medals Given for Rescue at Med Center

The campus Police Department recently presented UC Lifesaving Medals to four officers for a rescue at the UC Davis Medical Center in April 2018.

The UC Police Chiefs Association approved Chief Farrow’s nominations of Sgt. Moaz Ahmad, Cpl. Thomas McGee and officers Shawn Bowers and Jose Pinedo for UC Lifesavings Medals, recognizing the foursome for preventing a medical center patient from falling from a third-floor window. The patient had kicked out the window and started to climb out.

“Your quick decisions and professional response saved the life of a patient in distress,” Brunet said. “You demonstrated wonderful team effort and sincere compassion while handling this life or death situation.”

Bowers, the first officer on the scene, heard yelling coming from the area of the west stairwell ramp and located the patient. Ahmad arrived at the west entrance, and from ground level saw the patient hanging part-way out the window.

Ahmad raced up to assist Bowers, who was trying to pull the patient inside.

The patient resisted and started to break free from the officers’ grasp. Ahmad then used his Taser on the patient, allowing the two officers to gain control. McGee and Pinedo arrived as the patient started to resist again, and the four officers successfully pulled the patient inside and got the person to treatment.

The Police Department ceremony, held in the Activities and Recreation Center Ballroom, also included official sendoffs for new retirees and the official introduction of a new professional employee.

The retirees: Manuel Guerrero (42 years in law enforcement, including 32 years in the city of Davis), officer Ray Holguin (during his 19 years with the campus Police Department, he served as outreach officer and helped establish the Cadet Academy and Community Academy) and officer Mark Tingley (40 years in law enforcement, the last five with the campus Police Department).

Capt. Brunet (pronounced broo-nay), who joined the Police Department in March, took the oath of office and received his badge, pinned on by his wife.

Brunet came to UC Davis after a 30-plus-year career with the California Highway Patrol, the last four years as a deputy chief in charge of the Personnel and Training Division. He participated with the executive leadership of both the CHP and the California Association of Highway Patrolmen on building public trust in the CHP.

He earned a Bachelor of Science degree from California State University, Los Angeles, and is a graduate of the Naval Post Graduate School’s Executive Leadership Program.

●︎ Officers — Rickardo “Rickie” Lee and Justin Williams, both of whom are UC Davis graduates who completed the Police Department's Cadet Academy in 2018 and earned UC Davis Police Department scholarships to attend the Sacramento Police Academy — from which they graduated last December.

The Police Department continues to sponsor outstanding campus cadets in the regular police academy, awarding four scholarships this year — not only scholarships but offers of employment upon graduation. The 2019 recipients: Gustavo A. Ochoa, Ali Haider, Chaeeun Park and Benjamin M. Saxe.

They were among 20 cadets who successfully completed the campus academy that ran from January through April, and included classroom work one night a week and Saturdays; and physical fitness training one night a week.

In an awards program sponsored by American Legion Yolo Post 77 of Woodland, UC Davis Fire Chief Nate Trauernicht recently honored the following personnel, nominated by their peers (who are quoted):

Ben Rizzo, Firefighter of the Year — “Ben is an effective leader and has great problem-solving skills. He does an awesome job of overseeing the department’s apparatus maintenance program, often taking care of phone calls and emails on his off days to keep our fleet ready at all times. Ben’s knowledge of the campus and city geography is exceptional. He is a dedicated member of UCDFD who can always be relied upon.”

Avery Asera, Student Emergency Medical Technician of the Year — “She is a leader among her peers and has helped advance the student EMT and event EMT programs. Avery … volunteered countless hours to help students in the EMT program learn their skills outside of class, mentored her fellow event EMTs, and most recently has taken the lead role in creating and implementing a Stop the Bleed program on the UCD campus. Through her efforts, Avery has and will continue to make our community safer.”