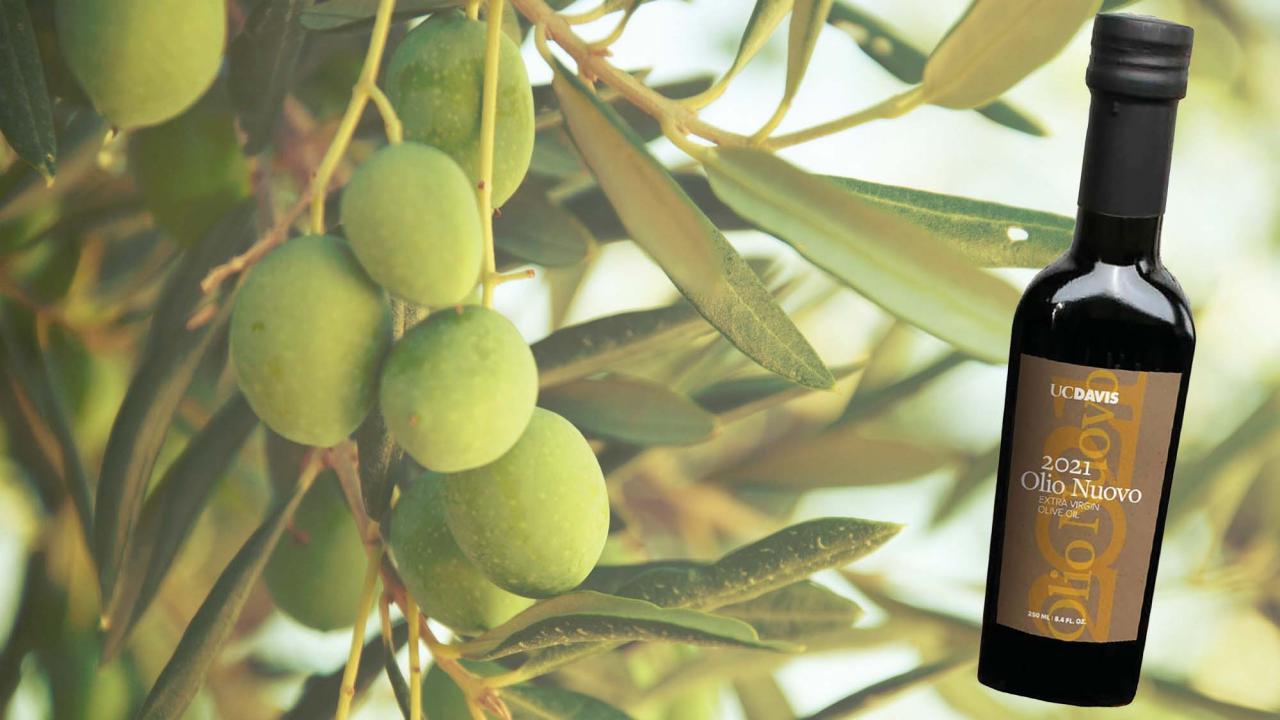 The UC Davis Olive Center will hold an Olio Nuovo Festival this weekend to celebrate the release of the center’s newest “new oil,” the freshest extra virgin olive oil available, produced in collaboration with the Yocha Dehe Wintun Nation and its Séka Hills line of agricultural products.

The Saturday afternoon festival (Nov. 20) will comprise various events at UC Davis’ Downtown Store and on campus, including tastings and a workshop on the care of olive trees in your own yard.

The UC Davis 2021 Olio Nuovo is derived from multiple olive varieties harvested at the university’s Wolfskill Experimental Orchards near Winters and Arbequina olives from the tribe’s ancestral lands in the Capay Valley. Séka Hills handled the milling, blending and bottling.

“Olio nuovo” describes an oil that is produced from the first olives of the harvest, milled and bottled soon after they are picked. This kind of oil is best consumed within a few months of its bottling as opposed to other olive oils with longer shelf life.

“The color is like a really deep chartreuse green and the flavors and aromas are just amazing,” Séka Hills Director Jim Etters said of the UC Davis Olio Nuovo.

The oil is the Olive Center’s second olio nuovo (the first having been produced 14 years ago) and one of many initiatives set in motion by Javier Fernandez-Salvador since he joined the Olive Center as executive director ion June.

Olio nuovo is popular with connoisseurs, according to Fernandez-Salvador, adding that he sought to produce it this year out of his desire to educate the public and recognize the long, fruitful relationship the center has had with Séka Hills.

‘It pulls you in’

“The general public consumes many kinds of olive oil from the store,” he said. “But once you start learning about specialty and high-quality olive oil, like our Olio Nuovo, it pulls you in.”

The Yocha Dehe Wintun Nation, which first planted olive trees in 2008, can attest to that. “Our customers look forward to it all year long,” Etters said. “There’s really a buzz about it come harvest time.”

UC Davis began producing olive oil in 2007 and established the Olive Center the next year. A staff researcher and nearly 60 affiliated faculty members and others, including Cooperative Extension farm advisors, conduct research to aid the California olive industry. The center also collaborates with institutions around the globe.

The center is partially funded by revenue from the sale of Olive Center products. The 2021 Olio Nuovo is priced at $19.50 for a 250-mililiter bottle; buy three at the Olio Nuovo Festival and get a free olive tree from Novovine.

Before coming to UC Davis, Fernandez-Salvador was an assistant professor at Oregon State University where he led a team of researchers studying olive propagation, crop production and management in colder climates.

He has a history of working with growers and processors on research for a variety of crops. That tradition continues here, where Fernandez-Salvador has already offered classes in Spanish and plans to expand internship opportunities and hold workshops around the state based on regional needs, among other ideas.

“I want to bring some innovation to our educational opportunities,” he said. “The industry is all around the state so we want to have some classes that rotate around.”

As in Oregon, he wants to continue working with Native American communities, something Yocha Dehe Wintun Nation has noticed.

“The Olive Center has been instrumental in educating the growers and processors and educating the consumer about what true olive oil should be,” Etters said. “We’re really excited about having Javier on board.”