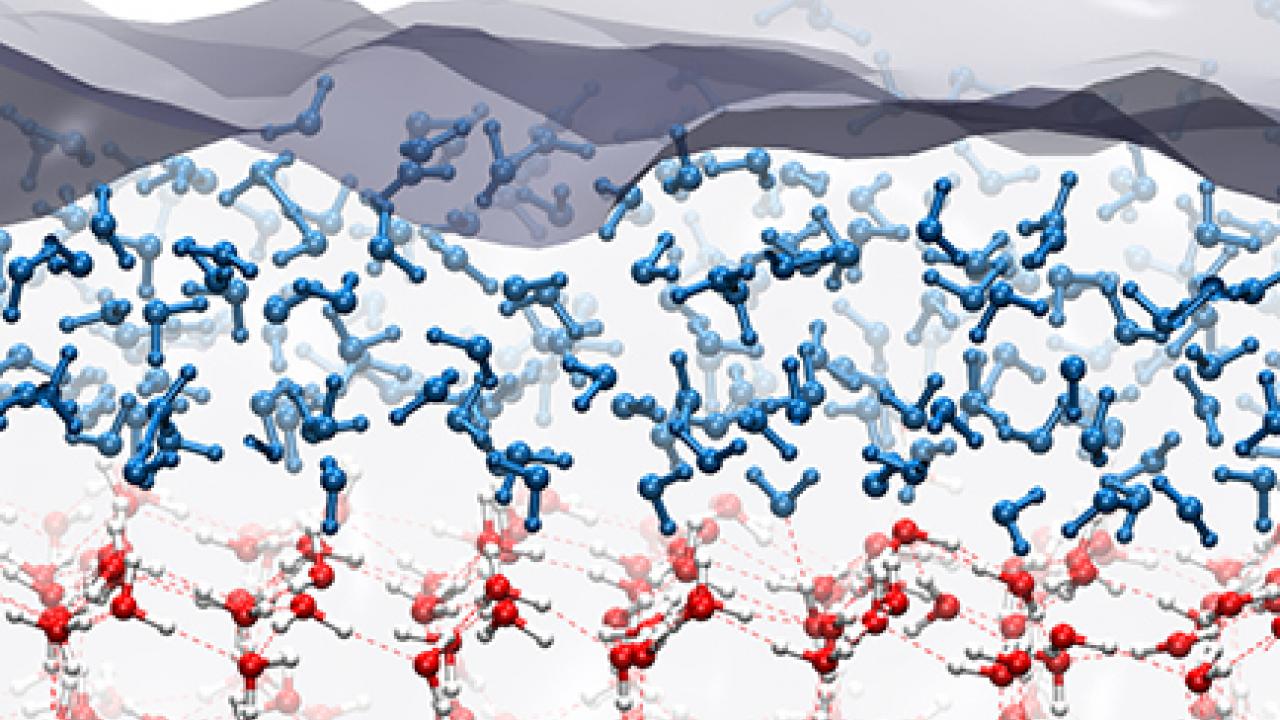 Ice Surface Melts One Step at a Time

For a solid, ice is slippery stuff, even well below its freezing point. Victorian scientist Michael Faraday discovered over 150 years ago that ice is coated with a thin layer of liquid, which both makes ice slippery and contributes to chemical reactions at the surface. Now, researchers in Germany, the U.S. and Japan have used a combination of experiments and computer modeling to show how this “quasi-liquid layer” forms as layers of the ice crystal melt.

“The structure of the surface changes in a stepwise manner, corresponding to melting of one or two layers,” said Davide Donadio, assistant professor of chemistry at the University of California, Davis, and a co-author on the study with colleagues led by Ellen Backus and Mischa Bonn at the Max Planck Institute for Polymer Research in Mainz, Germany. The work was published Dec. 12 in the Proceedings of the National Academy of Sciences.

The quasi-liquid layer appears because, while water molecules inside ice are arranged in a crystal lattice, molecules at the surface get “disordered” trying to maximize the number of hydrogen bonds, and can diffuse laterally across the surface, Donadio said.

Donadio’s laboratory ran computer simulations of ice crystals at temperatures between 230 Kelvin (about -43 degrees Celsius, or -45 degrees Fahrenheit) and 273 K (0 C, 32 F). The German team carried out experiments on ice crystals grown in the lab using a technique called sum frequency generation spectroscopy, which measures the vibrations of water molecules at the surfaces.

Using both models and experiments, the researchers found that a quasi-liquid layer about one water molecule thick is present at temperatures as low as -38 C (235 K). But this layer does not deepen steadily as temperature increases toward the melting point of ice. Instead, it goes through a step transition at -16 C (257 K) when a second layer of water molecules becomes disordered and mobile.

Apart from getting insight into how ice can move over surfaces (think of glaciers) or how objects such as skates or skis can slide over ice, understanding the surface of ice can help scientists better understand chemical reactions there. For example, ice crystals in clouds could act as catalysts to break down atmospheric ozone. Donadio and his collaborators hope to better understand these reactions and the role they play in the atmosphere.

“Understanding the structure is the first step to understanding how it functions as a catalyst,” Donadio said.