Chew On This: Personalized Health Care for Mountain Gorillas

A mountain gorilla walks in the forest of East Africa’s Virunga Volcanoes conservation area. It stops at a piece of wild celery, sits down, and begins to chew. It strips the vegetable’s fibrous threads through its teeth, extracting the fleshy, juicy bits, then drops the chewed stalk on the ground and ambles away.

Minutes later, wildlife veterinarians observing the scene write down the name of the gorilla and retrieve the saliva-drenched plant, which carries vital information about that gorilla’s health.

Scientists from the University of California, Davis, used the technique to rule out the presence of human herpesviruses among the region’s mountain gorillas. Their findings are described in a study published in the American Journal of Primatology.

Gorilla Doctors is a partnership between the Karen C. Drayer Wildlife Health Center or WHC, within the UC Davis School of Veterinary Medicine and the Mountain Gorilla Veterinary Project. The program monitors the health of mountain gorillas and provides veterinary care to injured and ill gorillas. 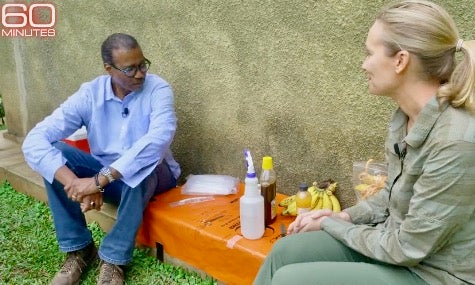 While a human herpesvirus may amount to no more than a cold sore in a person, it could be more serious if introduced to gorillas or other species. After extracting the DNA from the discarded plants and screening them for orally shed pathogens, the study found no evidence of human herpesviruses infection among the free-ranging gorillas.

“We were able to do this study entirely using chewed plants,” said lead author Tierra Smiley Evans, research faculty with the WHC and One Health Institute at UC Davis. “That allowed us to collect specimens from every known, habituated mountain gorilla in Uganda and Rwanda. This shows we can monitor gorillas — and potentially other primate species — over time, noninvasively, at the individual level and help answer questions regarding their conservation.”

Gorilla trekking in this region is a major draw, and the wild gorillas here are accustomed to humans. While gorilla tourism incentivizes the conservation of their habitat, it also requires a high level of care to prevent people and gorillas from exchanging diseases.

The study’s finding that human herpesviruses have not spilled over indicates that guidelines Gorilla Doctors and gorilla management authorities use to limit the distance between humans and gorillas in the park are helping to prevent the spread of disease. It also serves as a reminder to stay vigilant to prevent novel viruses from entering the population.

“Gorilla Doctors research has proven that human viruses cause respiratory disease in endangered mountain gorillas,” said co-author Kirsten Gilardi, DVM, executive director of the Gorilla Doctors and director of the WHC at UC Davis. “Dr. Evans’ research findings that human herpesviruses were not detected in gorilla saliva was reassuring. It’s further evidence that park rules for gorilla visitation, like wearing face masks and keeping a minimum distance of 23-33 feet, are effective in reducing the risk of transmission of human diseases to mountain gorillas.”

Chewed plant analysis is a relatively new tool for Gorilla Doctors to provide personalized care to this endangered species. Face time, of course, is also important, and the Gorilla Doctors and rangers know individual gorillas by sight. Such recognition is greatly aided by the wrinkles above each gorilla’s nose. Mountain gorillas have distinct noseprints used by veterinarians and rangers to identify them, much how fingerprints are used to identify people.

Evans said the personalities and dramas of gorilla life become quickly apparent when observing mountain gorillas. Evans recalls watching a young male gorilla a decade ago when she was collecting samples for her Ph.D. studies.

“He was in his teen years and always causing problems. He was also my favorite because he was an interesting, very inquisitive guy,” she said. “I recently went back, and there, 10 years later, is this chill, big silverback, with babies crawling all over him. Someone said, ‘That’s Kabukojo.’ I said, ‘You’re kidding me!’ We’d all gotten older; we’d all changed.”

The research was funded by the William J. Fulbright Program, U.S. Agency for International Development and the National Institutes of Health.