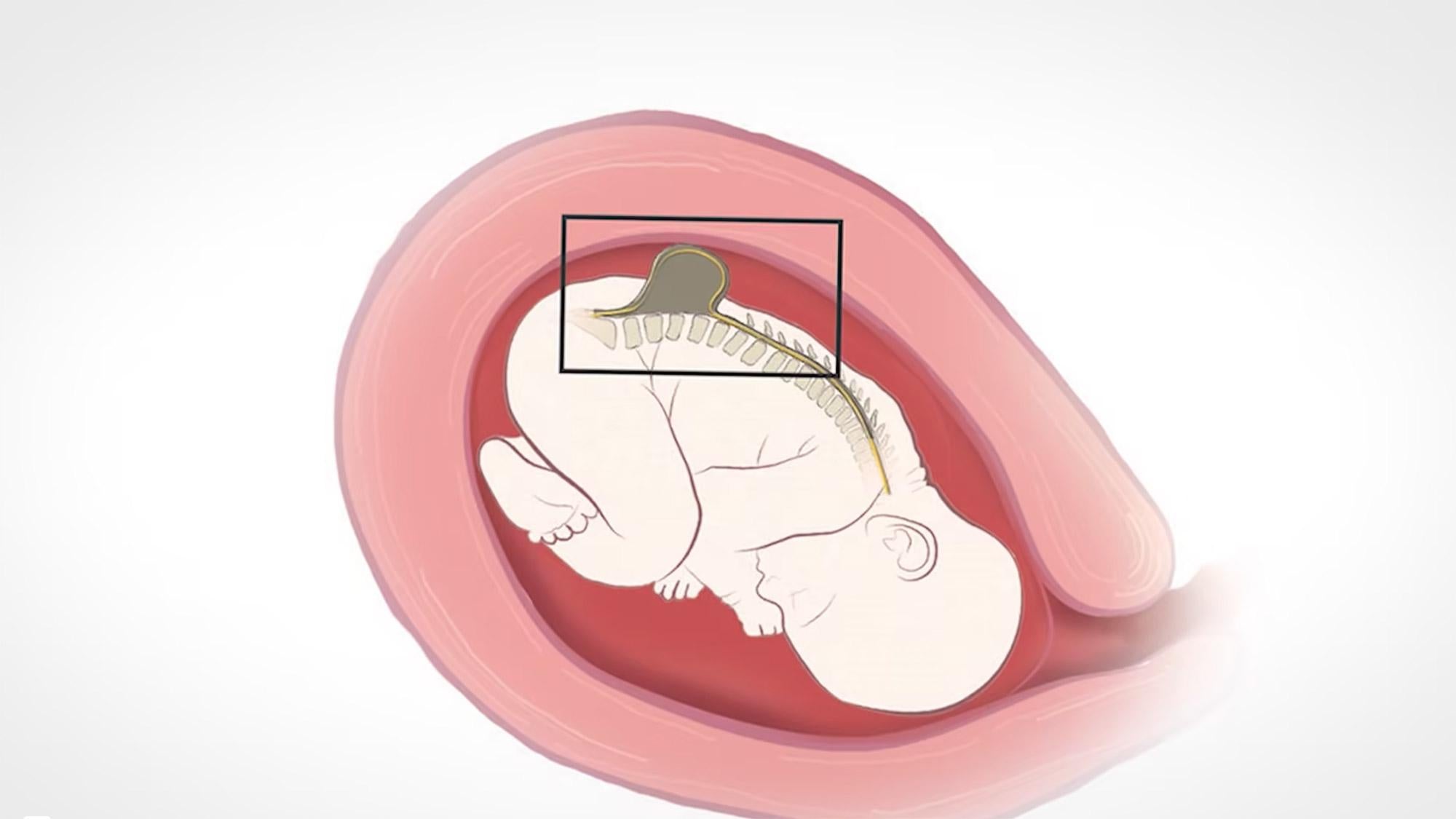 Can we cure spina bifida?

When Emily and her husband, Harry, learned that they would be first-time parents, they never expected any pregnancy complications.

But after an 18-week anatomy ultrasound, the Austin, Texas, couple got some difficult news: Their developing child had spina bifida. That same day, they also learned about the CuRe trial, the world’s first spina bifida treatment combining fetal surgery with stem cells at UC Davis Health.

For Emily, it was a lifeline they couldn’t refuse.

“We didn’t know what spina bifida was before we got our diagnosis. We are so thankful that we got to be a part of this. We are giving our daughter the very best chance at a bright future.” — Emily

Emily enrolled in the trial, and her developing baby was the world’s first to receive the groundbreaking treatment. This was made possible by a landmark clinical trial that was the result of more than two decades of research into the use of human stem cells in fetal surgery and animal modeling. The one-of-a-kind treatment, delivered while a fetus is still developing in the mother’s womb, could improve outcomes for children with this birth defect.

Launched in the spring of 2021, the clinical trial is known formally as the “CuRe Trial: Cellular Therapy for In Utero Repair of Myelomeningocele.” Thirty-five patients will be treated in total. 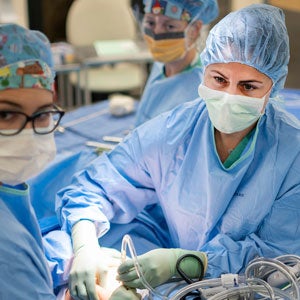 The four babies from the trial that have been born so far will be monitored by the research team until 30 months of age to fully assess the procedure’s safety and effectiveness.

The first phase of the trial is funded by a $9 million state grant from the state’s stem cell agency, the California Institute for Regenerative Medicine, or CIRM.

“This clinical trial could enhance the quality of life for so many patients to come,” said Emily, who traveled from Austin to participate. Her daughter, Robbie, was born in September 2021.

“This experience has been larger than life and has exceeded every expectation. I hope this trial will enhance the quality of life for so many patients to come. We are honored to be part of history in the making,” Emily said.

Spina bifida, also known as myelomeningocele, occurs when spinal tissue fails to fuse properly during the early stages of pregnancy. The birth defect can lead to a range of lifelong cognitive, mobility, urinary and bowel disabilities. It affects 1,500 to 2,000 children in the U.S. every year. It is often diagnosed through ultrasound.

While surgery performed after birth can help reduce some of the effects, surgery before birth can prevent or lessen the severity of the fetus’s spinal damage, which worsens over the course of pregnancy.

“I’ve been working toward this day for almost 25 years now,” said Diana Farmer, the world’s first woman fetal surgeon, professor and chair of surgery at UC Davis Health and principal investigator on the study.

The path to a future cure for spina bifida

As a leader of the Management of Myelomeningocele Study (MOMS) clinical trial in the early 2000s, Farmer had previously helped to prove that fetal surgery reduced neurological deficits from spina bifida. Many children in that study showed improvement but still required wheelchairs or leg braces.

Farmer, Wang and their research team have been working on their novel approach using stem cells in fetal surgery for more than 10 years. Over that time, animal modeling has shown it is capable of preventing the paralysis associated with spina bifida.

It’s believed that the stem cells work to repair and restore damaged spinal tissue, beyond what surgery can accomplish alone.

At the UC Davis School of Veterinary Medicine, Farmer and Wang, together with Dori Borjesson, director of the university’s Veterinary Institute for Regenerative Cures, began to refine their surgical techniques for dogs with spina bifida.

Spina bifida is a common birth defect in English bulldogs and frequently leaves them with little function in their hindquarters.

But would a surgery and stem cell technique improve the mobility of dogs with spina bifida?

“We had a couple of bulldog siblings named Darla and Spanky. Dr. Wang identified them early on and asked, ‘Do you think we can try this?’ We said, ‘Yes, let’s try the surgery with stem cells, follow them and see how they do,’” said Beverly Sturges, professor emerita and neurosurgeon at UC Davis School of Veterinary Medicine.

The team performed the surgery when the dogs were just 10 weeks old. The bulldogs became the world’s first dogs to be successfully treated with surgery and stem cells.

By their post-surgery re-check at 4 months old, Darla and Spanky were able to walk, run and play.

Sturges is now leading a canine clinical trial at UC Davis, assessing the difference between dogs who have surgery and dogs who have the surgery and the stem cell treatment. The study is still looking for bulldogs, born both with and without spina bifida, to participate.

“I’m an animal lover and a dog lover. For me, it’s enough to get a treatment for the dog, to fix the dog, but then to be able to translate this into people and help people, to help little babies with this condition, I mean there’s just nothing better,” Sturges said.

Emily’s path to the CuRe trial included screenings, MRI scans and interviews. When she learned she was accepted, she and Harry moved to Sacramento temporarily for the fetal surgery and weekly follow-up visits during her pregnancy.

Her fetal surgery was scheduled for July 12, 2021, at 25 weeks and five days gestation.

Farmer and Wang’s team manufactured clinical grade stem cells — mesenchymal stem cells — from placental tissue in UC Davis Health’s CIRM-funded Institute for Regenerative Cures. The cells are known to be among the most promising type of cells in regenerative medicine.

The lab is a Good Manufacturing Practice, or GMP, Laboratory for safe use in humans. There, they made the stem cell patch for Emily’s fetal surgery.

“It’s a four-day process to make the stem cell patch,” said Priya Kumar, the scientist at the Center for Surgical Bioengineering in the Department of Surgery who leads the team that creates the stem cell patches and delivers them to the operating room. “The time we pull out the cells, the time we seed on the scaffold and the time we deliver is all critical.”

During Emily’s historic procedure, a 40-person operating and cell preparation team did the careful dance that they had been long preparing for.

After Emily was placed under general anesthetic, a small opening was made in her uterus, and they floated the fetus up to that incision point so they could expose its spine and the spina bifida defect. The surgeons used a microscope to carefully begin the repair.

Then the moment of truth: The stem cell patch was placed directly over the exposed spinal cord of the fetus. The fetal surgeons then closed the incision to allow the tissue to regenerate.

“The placement of the stem cell patch went off without a hitch. Mother and fetus did great!” — Diana Farmer

The team declared the first-of-its-kind surgery a success.

“One of my first fears was that I wouldn’t be able to see her, but they brought her over to me. I got to see her toes wiggle for the first time. It was so reassuring and a little bit out of this world,” Emily said.

For Farmer, this day is what she had long hoped for.

Both mom and baby are at home and in good health. Robbie recently celebrated her first birthday.

At Michelle Johnson’s 20-week ultrasound, she received the overwhelming news that her baby had spina bifida.

“We had no clue of what the fate of that diagnosis would mean for our child,” Johnson said. “But we did know that no matter what happened, we loved this baby and we would do whatever it took to give our baby the best outcome.”

She applied to be part of the CuRe trial. By 25 weeks, she received the fetal surgery that she believes has made all the difference.

“We could see the tremendous healing that took place from week to week,” said Johnson, who had weekly ultrasounds. “We could see the reduced hydrocephalus [a condition in which fluid builds up in the brain] in the fetus. We could see the baby’s ankles moving, legs kicking. The progress was evolving. It was just amazing.”

Tobias (Tobi) Marlowe Maginnis was born 7 pounds, 13 ounces and 19 ¾ inches long. He did not have fluid buildup in his brain and only required IV fluids and oxygen for the first 24 hours after birth. Johnson and her son were discharged from the hospital four days later.

The CuRe team is cautious about drawing conclusions and said much is still to be learned during this safety phase of the trial. The team will continue to monitor Robbie, Tobi and the other babies in the trial until they are 6 years old, with a key checkup happening at 30 months to see if they are walking and potty training.

“I am so thankful to be part of this journey to find a cure for spina bifida for Tobi and for so many others,” Johnson said. “They are advancing medicine at UC Davis Health and Tobi is proof of that.” 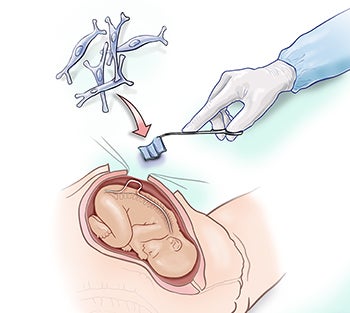 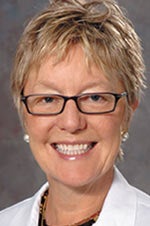 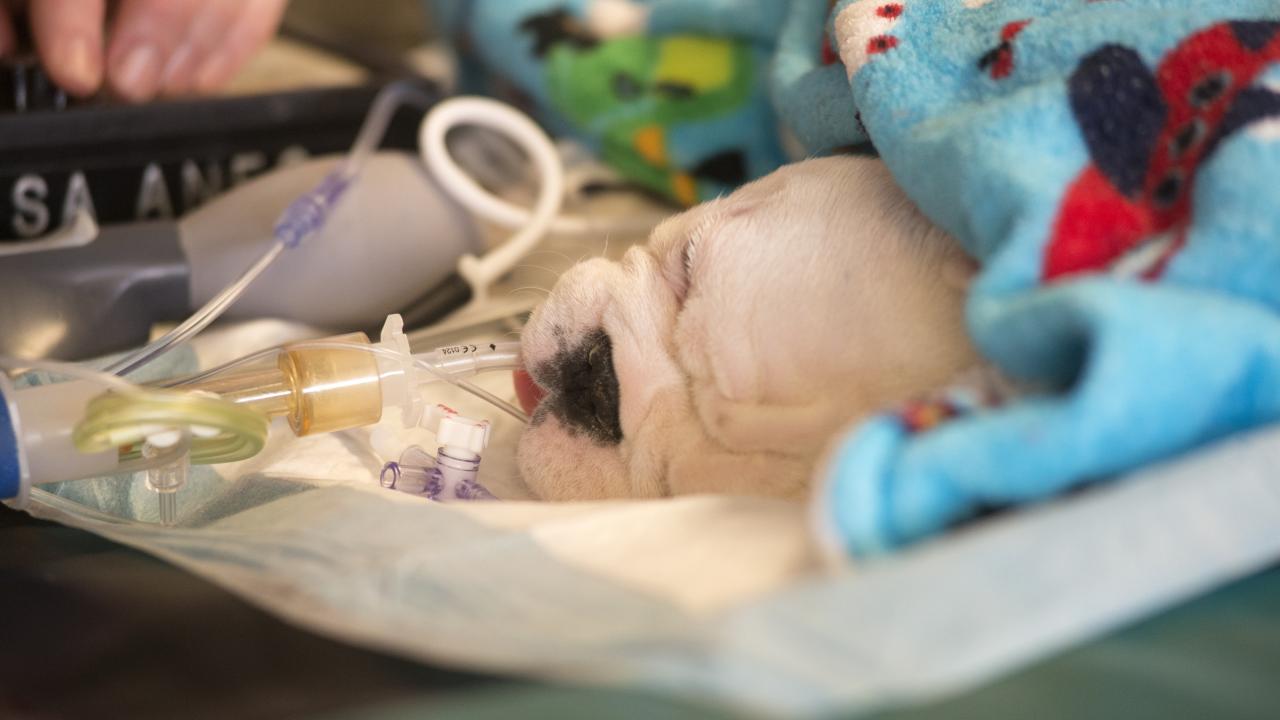