Robert Irwin, a professor at University of California, Davis, has been working on a community-based digital storytelling project, Humanizing Deportation/Humanizando la Deportación, since 2016. Irwin, a professor of Spanish, and teams of UC Davis graduate students, as well as collaborators from several Mexican institutions, have carried out fieldwork all over Mexico and California, facilitating the production of hundreds of personal stories on issues relating to deportation.

The project website describes their mission and contains over 300 digital stories of more than 250 different people. These testimonial audiovisual shorts focus on the issues that migrants want to highlight regarding their experiences and their thoughts on the contemporary phenomenon of mass deportation.  The archive also has incorporated stories of migrants in transit through Mexico, such as Central American refugees who risk deportation upon arrival in the U.S. as well as while traveling through Mexico.

In 2019, a Strategic Communications video crew from UC Davis accompanied Irwin and his team on one of their trips to Mexico. They created a documentary on the project, delving further into several migrants’ stories and illustrating the continuing effects of heightened border securitization and deportation in both the United States and Mexico.

Migrants talk about their attempts to make a new life in the country they’ve been sent back to, or of their living with the risk of deportation. Some repatriated Mexicans have no memory of their “homeland,” and for many Spanish is their second language. While many have found jobs and reorganized their lives, others are living in homeless shelters or on the streets of Tijuana, many miles from their true homes of San Diego, Los Angeles, or other cities. Many feel they live in danger every day.

In total, this project goes beyond mere statistics of the 3 million deported since 2008, instead sharing the personal stories of several hundred of them.

“Neither media coverage nor political discourse adequately accounts for the degree of human suffering that deportations have generated,” Irwin said. “Our project aims to communicate its human consequences in all their complexity.”

Irwin and his team hope that their project will educate, gain political traction, and contribute to policy change.

Lizbeth de la Cruz Santana, who appears in the documentary, is one of the graduate students who was a member of the fieldwork team that Irwin began working with in Tijuana on Humanizing Deportation/Humanizando la Deportation in 2017. Over the course of her three years collaborating on the project, de la Cruz Santana was inspired to create a mural on the Tijuana side of the U.S.-Mexico border wall. She said she wanted to use public art to investigate what it means to be a childhood arrival who has been deported in an interactive, collaborative border mural.

The finished mural depicts seven different migrants who arrived in the United States as children. QR codes are incorporated into the wall, allowing viewers to follow a link to information about the people represented in the mural.

Douglas Oviedo, one of the community storytellers in the documentary, is a Honduran migrant of the fall 2018 caravan who has written a book about his experience. Titled Caravaneros, it was published in collaboration with the Humanizing Deportation team a few months ago by Festina Publicaciones. He hopes to raise awareness regarding the profiles and experiences of contemporary migrants, in an era in which they are often portrayed negatively, and suffer significant harm in their interactions with governmental institutions.

UPDATE: Oviedo presented his book to a virtual Zoom audience in November 2020. He told the audience, in Spanish: “We know very well that the sacrifice of the American dream is just to work. This is not a dream,” Oviedo reminded the attendees. “It’s not easy to earn a dollar in this country. We have to work for it and sweat for it. We are always prone to discrimination from other people who do not want Latinos. So then this isn’t a dream. This is a reality that we are living.”

The presentation on his book was organized by the Global Migration Center and Humanizing Deportation. It was moderated by Irwin and UC Davis doctoral candidate Sarah Hart. Joining them was Cornell University’s Emerson Hinchliff Chair of Hispanic Studies and Professor of Comparative Literature, Debra Castillo, and UC San Diego Associate Professor of Spanish Julia Medina.

Oviedo, migrant, pastor, and pro-migrant activist, discussed his first-hand experience as a caravanner, the process of a refugee seeking religious asylum in the United States, and how he came to tell this story in the form of a testimonial drama. His new book Caravaneros is available here. Watch the recording of the conversation here. 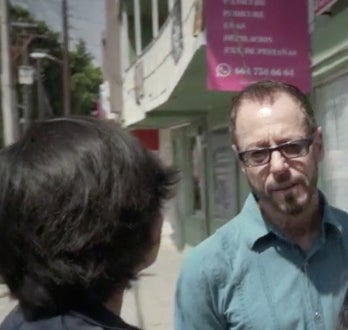 Professor Robert Irwin's project began with a mission to “make visible a range of humanitarian issues that mass human displacement has generated on both sides of the U.S.-Mexico border.”

An interview with Lizbeth De La Cruz on the Backdrop podcast.

The writer, Leigh Houck, is a current graduate student in Spanish at UC Davis. Intern Michelle Villagomez covered the book talk given by Oviedo.

Department of Spanish Immigration College of Letters and Science Migration