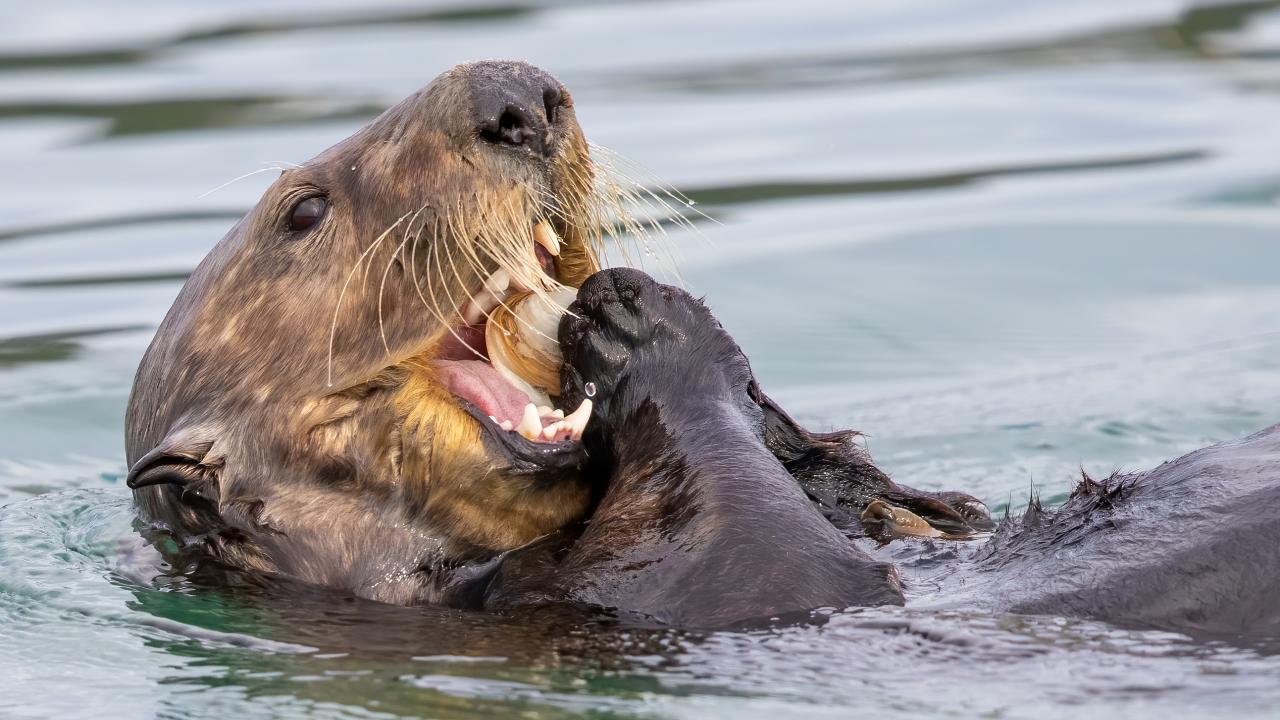 A recent study led by the EpiCenter for Disease Dynamics at the School of Veterinary Medicine’s One Health Institute (OHI) examined the association between long-term environmental exposure to domoic acid (DA) and fatal cardiac disease in southern sea otters (Enhydra lutris nereis), a threatened species. Not only did repeated DA exposure significantly increase the risk of death by cardiomyopathy, but for the first time, their research found that risk associated with DA was highest among adults of prime reproductive age – whose survival is critical to population recovery. These findings have serious One Health implications across marine ecosystems, human and animal health, and the west coast commercial fishing industry.

When southern sea otters were first classified as ‘threatened’ by the Endangered Species Act in 1977, one of the primary threats to their survival was exposure to oil and oil spills. Southern sea otters are a small marine mammal, with average adult weights between 40 to 60 pounds (females and males, respectively). They maintain their body temperature using their dense fur (rather than relying heavily on subcutaneous fat like most other marine mammals). In the event of a spill, oil can disrupt the insulation properties of their fur leading to hypothermia and death. Fortunately, organizations such as the Oiled Wildlife Care Network have developed highly effective systems for responding to and treating sea otters affected by oil spills, significantly increasing their survival rates should they be caught in such disasters. Other ongoing threats include trauma from white shark bites, boat strike/fishing gear, infectious diseases, disruption of food supplies (declining kelp forests) and secondary threats from climate change.

As climate change continues to increase ocean temperatures, toxic algal blooms are also increasing, causing a corresponding spike in domoic acid production that impacts the entire food web. Domoic acid is a naturally-occurring neurotoxin produced by phytoplankton (microalgae) that can bioaccumulate in the tissue of filter-feeding shellfish and fish, with serious health consequences when consumed by marine mammals (sea otters, sea lions), seabirds and potentially humans. Domoic acid levels are regularly monitored by the California Department of Public Health (a co-author on this study), and when levels become too high, commercial fishing of crabs and shellfish is temporarily closed to protect seafood consumers, but this also has economic repercussions. Sea otters eat many of the same seafood items as people, but much more of it, consuming around 25% of their body weight in seafood daily, often including crab and clam which can contain high toxin levels.

Southern sea otters have long been considered an indicator species for marine ecosystems – their health and population growth or decline – can be a strong indicator of the overall health of an ecological system. When an ecosystem is out of balance, in this case, when increasing water temperatures promotes toxic algal blooms that produce domoic acid, there are cascading health consequences. Southern sea otter health can serve as a warning sign.

In the study published in the journal Harmful Algae, researchers integrated domoic acid surveillance datasets with life history data from 186 free-ranging, radio-tagged southern sea otters and found that otters exposed to high levels of domoic acid increased the sea otter’s risk of dying from heart disease by 1.7-fold. Sea otters that consumed large quantities of crab and clam had a 2.5- and 1.2-times greater risk of fatal heart disease, respectively, than otters that ate less crab and clam.

Most alarming was the unexpected association between DA exposure and heart disease risk according to sea otter age. Adults of prime reproductive age (~4 years old) that were exposed to high levels of DA had 2.3 times greater risk of fatal heart disease than an otter exposed to low levels of DA, while 10-year-old sea otters exposed to high DA had only 1.2 times greater risk.  Survival of prime-age adult females is the main driver of sea otter population growth and the finding that DA exposure is especially detrimental for this age group suggests that persistent exposure to high levels of DA will likely impact the long-term viability of this already threatened species. This study also offers insight into the pervasiveness of DA in the food web and raises awareness of the chronic health effects of DA for wildlife, and potentially humans, at a time when toxic blooms are on the rise.

Domoic acid is also the cause of amnesic shellfish poisoning in people, a severe neurological illness that can be fatal. The lasting health effects of recurrent DA exposure are just beginning to be recognized in humans and chronic impacts of this toxin were first discovered in wildlife. This study illustrates the importance of long-term wildlife disease monitoring that can improve our understanding of the wide-reaching health impacts of DA. Our findings have implications for mortality in wildlife and under-reported disease manifestations in people exposed to DA in the natural environment. Future climate projections suggest that harmful algal blooms will become more severe, frequent, and widespread. There is an urgent need for reliable information on the wide-reaching health impacts of domoic acid exposure on humans and wildlife.