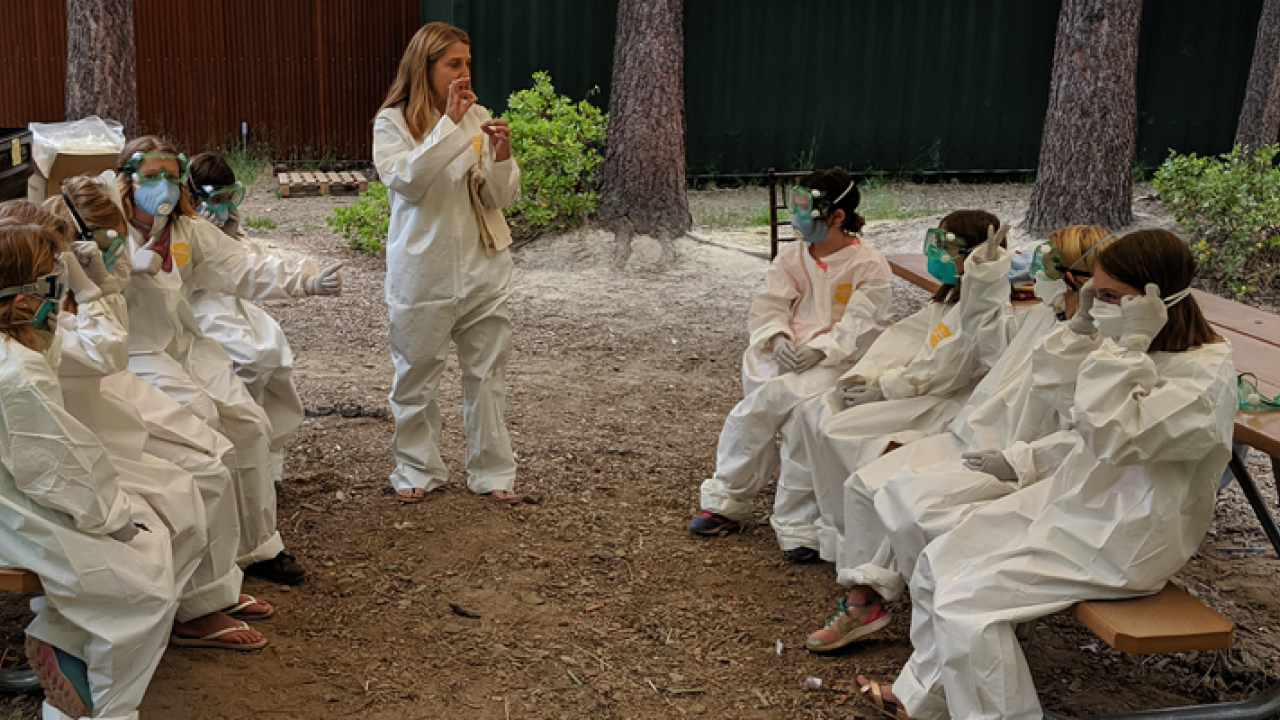 Girls in STEM campers "collect" bats, step into shoes of wildlife biologists for the day

There are many questions as the nine girls begins pulling on white Tyvek safety coveralls, and the air is humming with excitement. Poles are driven into resistant earth and mesh mist nets are hung between them.

Now they wait. The bats will be here soon.

Well, plastic toy bats, at least. Ranging from 8-to-11 years old, the girls are participating in a one-week STEM camp hosted by the Boys and Girls Club of North Lake Tahoe, in Kings Beach. Aimed at girls entering the 3rd-6th grades, the camp focuses on hands-on science activities taught by women scientists reflecting a variety of STEM fields. Previous topics have included stream ecology, virtual reality and aviation.

The theme for the day is wildlife surveillance, with a toy bat collection exercise led by Dr. Tracey Goldstein, associate director at the UC Davis One Health Institute and director of the One Health laboratory in the UC Davis School of Veterinary Medicine.

“It’s so important to get kids excited about science, and specifically caring about the environment and conservation,” said Goldstein. “I just love field work, getting outside and working with the animals, so I wanted to give them a taste of it.”

Before the exercise, Dr. Goldstein speaks to the campers about her career path as a wildlife researcher studying diseases in marine mammal and other wildlife populations. She tells stories from seal captures in the Arctic to discovering a new ebolavirus species in bats in Sierra Leone during her work with USAID PREDICT, a 10-year project led by the One Health Institute that aimed to find viruses in animals before they spill over into humans.

Once the mist nets are up, Dr. Goldstein attaches a dozen plastic bats and demonstrates how to safely and humanely remove them for sampling. The girls are somewhat disappointed that the bats aren’t real, but all eyes are on Goldstein. Then it’s their turn, and they work carefully to remove the bats from the tangled nets.

Goldstein is encouraged by the girls’ excitement throughout the activity, and by their interest in science, biology and animals. What does a career look like for a veterinarian, for a wildlife biologist, for a scientist? Where do they work? What kind of animals do they get to work with? How can I do that job someday? The campers want to know everything.

“I think it’s pretty cool that they chose science over other kinds of camps. Their fascination and curiosity with nature and wildlife are really important in helping address conservation challenges and climate change.”