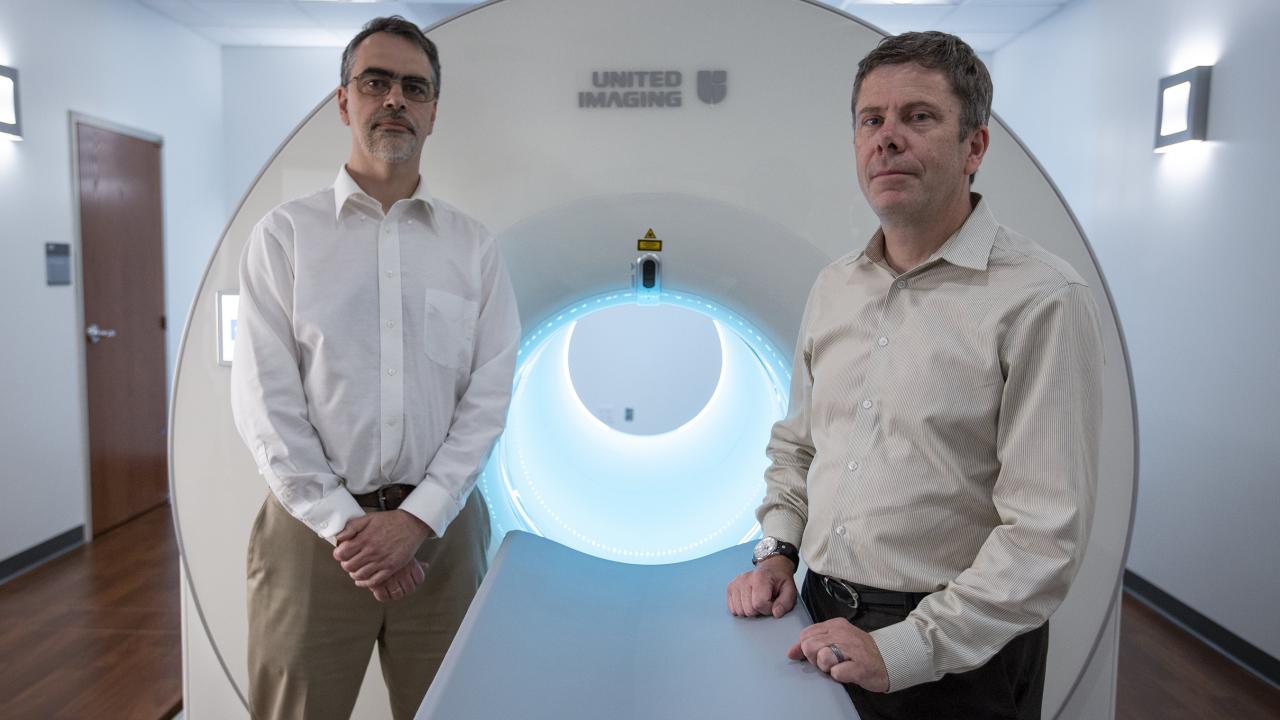 The University of California, Davis, today (June 15) named the recipients of the 2020 Chancellor’s Innovation Awards. The awards recognize faculty, project teams and community partners for their work, dedication and success in improving the lives of others and addressing the needs of our global society through innovative solutions.

“Research universities like UC Davis play a critical role in advancing innovative solutions for the global community that not only stimulate our economy but create a better quality of life,” Chancellor Gary S. May said. “The recipients of this year’s awards demonstrate the impact of reaching beyond what is expected to deliver game-changing innovations that address some of the world’s most critical issues.”

The awards comprise Innovator of the Year, Innovative Community Partner and Lifetime Achievement in Innovation. The program is managed by the Office of Research.

“Some of the greatest examples of bold innovation emerge when experts from different disciplines work together to solve a problem,” said Prasant Mohapatra, vice chancellor for research. “Many of the recipients for this year’s awards illustrate just how effective those collaborations can be.”

Innovators of the Year

The Innovator of the Year awards recognize individual faculty, staff or teams whose innovative research or accomplishments have made a measurable societal impact in the preceding year, or whose activities have achieved important milestones and present very strong potential for societal impact. Recipients receive $10,000 to apply to their research or community engagement efforts.

Ramsey Badawi, professor and vice chair of research in the Department of Radiology, and Simon Cherry, Distinguished Professor in the Department of Biomedical Engineering, developed EXPLORER with the intent to fundamentally change the way cancers and other diseases are studied and diagnosed. Cherry and Badawi conceived of the idea in 2005 and worked relentlessly to bring their vision to fruition — reaching the major milestone of clinical implementation for patient care in 2019.

The novel EXPLORER whole-body scanning technology has the potential to revolutionize human health by providing comprehensive imaging data for disease diagnosis and treatment and by enabling entirely new fields of biomedical research.

Traditional PET scanners use short-lived radioactive tracers to show how organs and tissues are functioning in the body, only scanning approximately 20-centimeter segments at one time. In contrast, the EXPLORER can image the entire human body all at once, revealing system interactions that were previously unavailable.

The EXPLORER also has the capability of producing much higher quality images than any other prior PET scanner, or alternatively of reducing the radiation exposure to the subject by as much as 40-fold.

Cherry and Badawi developed and tested several prototypes to prove the concept using RISE Grant funding from the Office of Research. This work led to a $15.5 million Transformative Research Award from the National Institutes of Health, which laid the foundation for a partnership with United Imaging Healthcare to develop a system for human clinical trials.

The Food and Drug Administration approved the scanner in late 2018, and UC Davis Health subsequently opened its EXPLORER Molecular Imaging Center in Sacramento —  the first combined research and clinical total-body PET center in the world. EXPLORER scanned its first human research subject in June 2019 and first clinical patient the next month.

The technology is already being used in groundbreaking studies tracking HIV reservoirs in patients with quiescent disease, measuring the metabolic parameters of cancer in vivo, and looking at systemic inflammatory responses of patients with recent heart attacks. More than 300 research and clinical cases have been completed in the first year of operation.

The team of Daniela Barile, Bruce German, Carlito Lebrilla, David Mills, Jennifer Smilowitz and Mark Underwood, affiliated with the UC Davis Foods for Health Institute, has conducted research at the forefront of infant nutritional health for more than a decade, with a focus on understanding the key role of breast milk in shaping the development of a healthy intestinal tract. They have provided a legacy of knowledge of how milk components interact with a specific type of bacteria to protect human infants from intestinal inflammation.

Through a sequence of discoveries that identified the important role of complex oligosaccharides in human milk and their role in supporting growth of a specific strain of bacteria (Bifidobacterium longum ssp. infantis) that promotes a protective and nourishing environment within the intestine of infants, they were able to develop a novel probiotic intended to enhance the health of premature and full-term infants.

In parallel, the team identified an important consequence of modern medicine and pediatric policy. The combination of antibiotics, cesarean section births and infant formula have largely eliminated the bacterium that co-evolved with humans from modern human populations. As a result, most infants today, even when breast-fed, start life with a very disrupted, pro-inflammatory intestinal microbiota. The implications of that disruption are now emerging from the epidemiologic literature with causality confirmed in preclinical studies. Disrupted intestinal microbiota is linked to a long list of chronic diseases such as asthma, diabetes and cardiovascular disease.

Members of the research team secured a series of patents for their work with support from UC Davis’ Innovation and Technology Commercialization office and then, in 2012, launched Evolve BioSystems Inc. to develop activated probiotic and prebiotic products. To date, Evolve BioSystems has raised $70 million in venture funding and has introduced its first product, Evivo, the only baby probiotic that contains activated B. infantis EVC001, to the market.

Within the past year, the company formed several key partnerships and expanded its product offering into Asia. The company is now conducting a clinical study with funding from the Bill and Melinda Gates Foundation to determine the impact of the probiotic on infants with severe acute malnutrition in Bangladesh.

Presented to Mayor Darrell Steinberg and the city of Sacramento for their support in advancing the vision and execution of Aggie Square, a 1.3 million square-foot innovation district currently in development. Located on the UC Davis Sacramento campus, Aggie Square will house and connect UC Davis researchers, business partners and community-based programs to spur innovation and regional economic growth.

Since the inception of the Aggie Square project, Mayor Steinberg and the city of Sacramento have been integral partners. Early contributions included active participation in the initial planning to develop the framework for Aggie Square, selecting the location and guiding opportunities for local economic and community development. In November 2019, the Association of University Research Parks recognized Chancellor May and Mayor Steinberg with its Leadership Award for forging the unique partnership around Aggie Square.

Presented to Bruce Hammock, Distinguished Professor in the Department of Entomology and Nematology, who holds a joint appointment with the UC Davis Comprehensive Cancer Center. This award recognizes researchers whose career accomplishments include innovations leading to a long-term positive impact on the lives of others and who are an inspiring influence for other innovators.

Hammock founded the field of environmental immunoassay using antibodies and biosensors to monitor food and environmental safety, and human exposure to pesticides.

His laboratory developed the first recombinant virus for insect control, and extending from his insect research, he discovered a human enzyme termed soluble epoxide hydrolase that regulates a new class of natural chemical mediators, which in turn regulate inflammation, blood pressure and pain. This discovery led to a new drug now in human trials for neuropathic pain as well as a version in development for treating painful conditions in companion animals.

In 2019, Hammock received a $6 million Outstanding Investigator federal grant for his innovative and visionary environmental health research. His pioneering work on novel targets to combat inflammation has far-reaching applications, not only in pain, but also in other diseases, including cancer and cardiovascular disease.

He has pioneered transdisciplinary research across campus and has engaged faculty in multiple colleges and schools to transform the way we treat diseases in multiple species.

Just recently, Hammock turned his attention to using soluble epoxide hydrolase as a means to control the deadly cytokine storm associated with COVID-19.

Hammock is the CEO and founder of EicOsis, a therapeutics company aiming to provide a new analgesic solution for pain management, and recipient of a Sacramento Region Innovation Award in 2019. That same year, the National Institute on Drug Abuse awarded the company a $15 million grant to support human clinical trials of a novel compound that has been found effective for the treatment of pain in preclinical animal studies.

About the awards program

The UC Davis Chancellor’s Innovation Awards program was established in 2016 to celebrate the university’s innovative contributions to the regional and global community. The program is run by Venture Catalyst, a unit within the Innovation and Technology Commercialization division of the Office of Research.

The call for nominations for this year’s award was issued in February 2020.

Nominations were reviewed by a selection committee consisting of past recipients, representatives from the Office of Research, external partners and delegates named by the deans of various UC Davis schools and colleges. Committee members rated each nomination based on a predetermined protocol evaluating the uniqueness of the innovation(s) and their potential societal impact. Recommendations from the committee were then submitted to the chancellor and provost and executive vice chancellor, and vice chancellor of research for final approval.