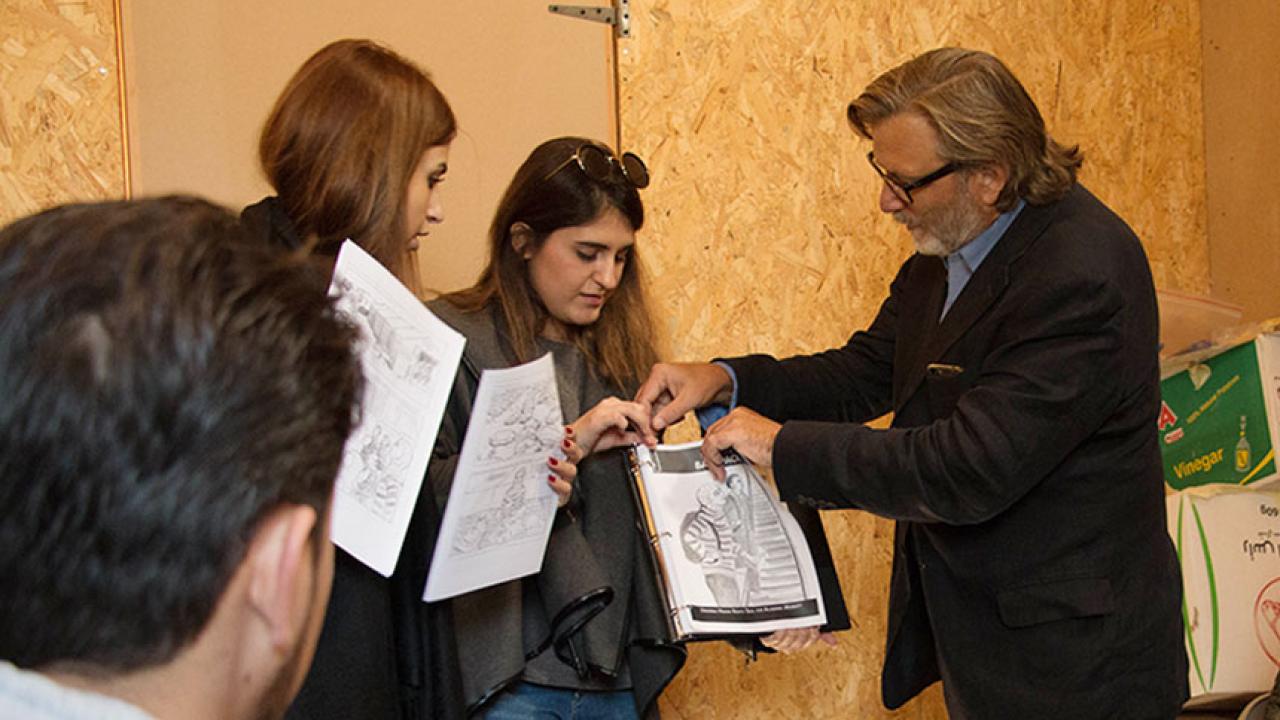 Jihad Qusanyeh, imprisoned and tortured as a student, will be among the first Syrian refugees to assemble a virtual “backpack” in a new project to help them reclaim their right to education.

The international consortium behind the project is led by Keith David Watenpaugh, a professor and director of Human Rights Studies at the University of California, Davis. Consortium members include the American Association of Collegiate Registrars and Admissions Officers, or AACRAO, and the Issam Fares Institute for Public Policy and International Affairs at the American University of Beirut, or AUB.

Qusanyeh, a fourth-year student of applied chemistry at the University of Damascus when he was taken prisoner for five years, wants to complete his studies. “I always aim to learn more and more for when I return to Syria,” he shared in a video recorded to include in his backpack. “I’ll use what I learn for rebuilding Syria.”

About 36 percent of global youth have access to higher education but only about 1 percent of eligible refugees do, according to the United Nations High Commission for Refugees. The ongoing Syrian civil war has internally displaced or made refugees of more than 12 million people, and hundreds of thousands among them were — or should have been — in university, Watenpaugh said.

Article 26 Backpack, a part of Global Affairs at UC Davis and supported by a $500,000 grant from the Ford Foundation, is named for the article that established the right to education in the Universal Declaration of Human Rights, nearly 70 years ago.

Watenpaugh said the tool will help refugees overcome significant impediments to re-entering academic life or applying for employment — from problems accessing their own documents to little clarity about the transferability of their credentials.

They can store their documents in a secure environment, access them wherever they are and easily share them with educational institutions and potential employers, Watenpaugh said. “It will help them become part of the society where they find refuge and potentially play a role in rebuilding their homelands if they can return,” he added.

More About the Technology Behind the Backpack

“A lot of what we do is important, but this was another level of helping our fellow human,” said Shawn DeArmond, who supervised the UC Davis web development group.“

Watenpaugh envisions broader implementation of Article 26 Backpack throughout the Middle East, particularly in the areas most affected by the war in Syria, and beyond. Moreover, he sees the Backpack’s potential to help not only refugees of war or those fleeing civil conflict, but also students with Deferred Action for Childhood Arrivals, or DACA, status in the United States and climate refugees.

The first stage of the implementation will be from June 15, through July 3. Watenpaugh and a team — including AUB students and faculty and AACRAO staff — will visit refugee camps in the Bekaa Valley and host refugees elsewhere to help about 300 create backpacks.

A comic book will help introduce the Backpack to refugees. Trained students will help refugees set up backpacks at article26backpack.ucdavis.edu and upload documents including images of diplomas, transcripts and resumes. Backpackers have the option to record a video to serve as an oral statement of purpose. They control what they put in the backpack and with whom they share it.

The Backpack comic book, designed by UC Davis doctoral student Maureen Burdock, follows Sara, who lives in a refugee camp, as she learns about the Backpack, attends an orientation session, and gets help photographing and uploading her documents.

Work this summer will create an Arabic-language version of the tool, and in the early fall the project will be back in Lebanon to help more refugees set up backpacks.

In the future, Article 26 Backpack will integrate credential evaluation, academic counseling and job placement assistance through a feature called Compass. AACRAO, the higher education association, is building a cloud-based pool of international credential evaluators to assist refugee students and, in some cases, reconstruct academic histories that have been lost due to war.

A historian of the modern Middle East, Watenpaugh has seen up close the need for Article 26 Backpack. He has led a multidisciplinary research team that produced several major studies on Syrian students and scholars who are refugees in Jordan, Lebanon, Greece and Turkey. His most recent book is the award-winning Bread from Stones: The Middle East and the Making of Modern Humanitarianism.