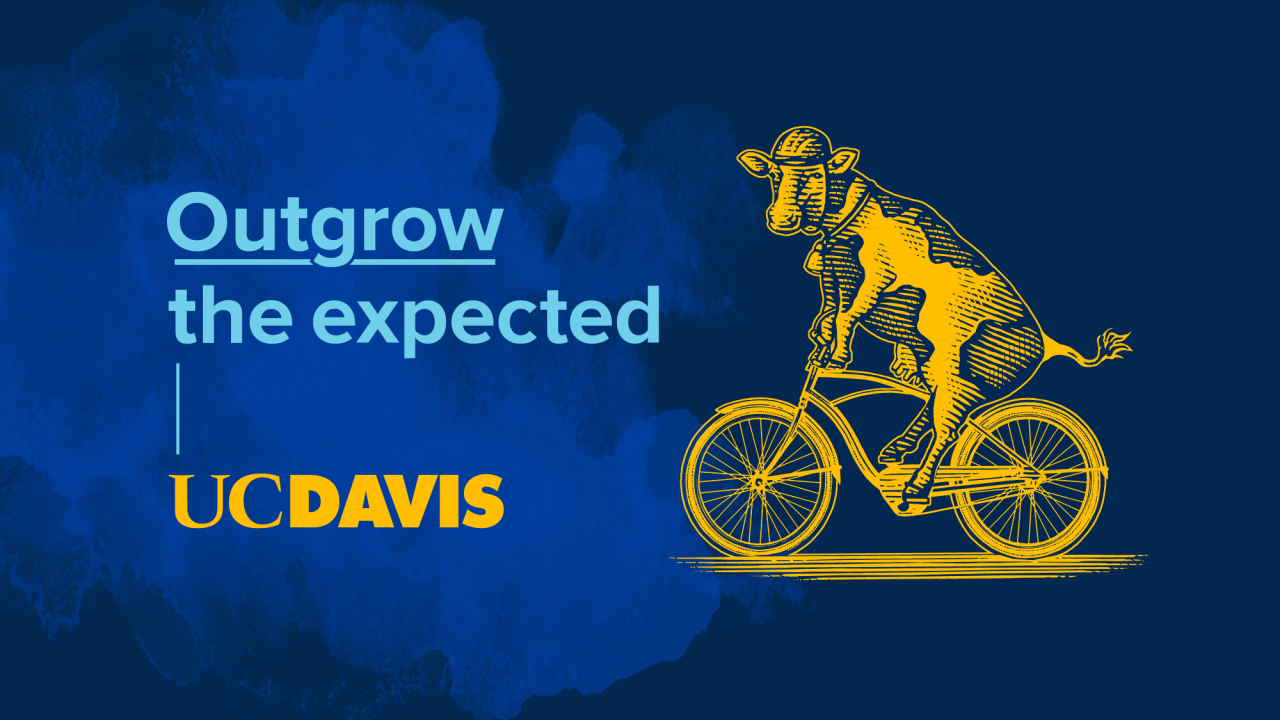 The University of California, Davis, is raising its profile across the nation with a multimedia campaign showcasing the kinds of research and advocacy that are propelling the university to new heights.

Launching today (Nov. 8), the campaign called “Outgrow the Expected” features digital ads, videos and even UC Davis-branded liners in the bins that travelers use when passing through security at Ronald Reagan Washington National Airport.

“This campaign demonstrates what Aggies have always known: That UC Davis anticipates and solves the problems of the future,” Chancellor Gary S. May said. “Now is the time to bring our expertise to bear on the challenges facing our world, and to outgrow what is expected of us.”

Digital ads will invite the viewer to imagine solutions and innovations like “conducting a pandemic response like a symphony” and rescuing birds from the recent oil spill in Orange County. More on those topics, as well as other stories and videos of the unexpected, are available on a campaign webpage.

“This bold campaign is the first comprehensive branding ever done in UC Davis’ history,” said Dana Topousis, chief marketing and communications officer. “We’re showing the world what makes our university unique, exciting, collaborative and competitive. UC Davis is the place to be, without a doubt.”

The campaign will include a video touting UC Davis’ groundbreaking research and public service, along with social media ads spreading stories of UC Davis innovations.

Airline passengers, including lawmakers and other decision makers, will see UC Davis’ name when they put their phones and keys into bins for security screening at Washington National — a way to spread the UC Davis message to the East Coast.

“Our days of being ‘the best kept secret in higher education’ are done,” said Jasmin Francis-Bush, director of brand management and marketing in the Office of Strategic Communications. “More than ever, the world needs big ideas and long-term vision. The good that we do is enhanced when decision makers know who we are and what we accomplish.”

Chancellor May introduced “Outgrow the Expected,” a campaign supported by a series of messages, visual cues, graphical treatments, fonts and colors, to a crowd of about 1,000 people on campus, plus more watching on a livestream, in January 2020. The campaign showcases the great work UC Davis is doing at home and around the world, and is one way “the sleeping giant is waking up,” he said.

Despite the challenges posed by the pandemic, like the inability to hold further in-person events, excitement about UC Davis has continued to spread. The university launched a $2 billion fundraising campaign last fall, dubbed “Expect Greater: From UC Davis, for the world,” and has already raised $1.4 billion.

Prospective students and their parents are getting even more information about UC Davis in a 30-minute episode of The College Tour, in which nine students and an alumna share their UC Davis experiences.

Starting today, the Amazon-produced video is available for streaming into millions more living rooms around the country on Amazon Prime Video and The College Tour’s own channel on Apple TV, Amazon Fire and more.

The UC Davis episode was previously available on Roku, as well as The College Tour’s mobile app and website. It’s hosted by former Amazing Race winner Alex Boylan, and shows many aspects of the undergraduate experience at UC Davis. Aggies explaining what they like most about UC Davis perform backflips in the stadium, ride through downtown Davis on a bicycle, take viewers inside the Horse Barn and up close with baby goats, and more.