UC Davis Crops and Compassion Help Feed Those in Need

Learn how Davis research and other activities are playing a major role in UC's effort to understand and address food insecurity among students through the university's Global Food Initiative.

As the summer sun warmed her, student Hanna Morris stood up and surveyed row upon row of vegetables ripe for harvest near the UC Davis Student Farm. The spring course on plant growth and care had ended, and this two-acre lab had been largely abandoned by her classmates.

Her heart grieved as she picked what she could to take to residents of a transitional housing project in Berkeley where she volunteered on weekends. “There’s still so much (available to harvest), and I’m barely making a dent in it,” the environmental science and management major said to herself.

Three years later, that same acreage has provided thousands of pounds of fresh produce for the Yolo Food Bank and shows how UC Davis crops and compassion are helping feed students and others in need.

Students are leveraging their university’s leadership in agriculture, food science and sustainability — and their own abilities — to address locally what is the growing national concern of food insecurity among college students and others. And along the way, they have developed leadership skills, discovered career paths and created a campus family.

It was three years ago that Morris began working through regulations related to agricultural practices, food safety and more to enable the field's produce to be gleaned for others. When Morris graduated in 2014, Carli Hambley, a senior majoring in anthropology, saw the project through its final hurdle related to insurance.

In January, Morris returned to the same fields to help as some 30 student volunteers harvested more than 3,300 pounds of produce in the first official gleaning of the PLS 5 Produce Recovery Project (named after the course).  “It was moving to see it all come together,” she said.

Morris said working on the campus project was the most important influence on her educational and career development. “One person can make a difference,” she said. “That was an important lesson for me.” She helps bring surplus food to individuals in need as a program coordinator for Food Shift of Oakland, California.

In June, volunteers gleaned more than 2,100 pounds of produce from the same field. And while the course went into retirement with its professor, organizers are seeking to build partnerships for gleaning in other teaching fields and orchards.

"We've broken ground," said Stacey Parker, the UC Davis Arboretum and Public Garden's horticulturalist who mentored Morris and Hambley through the project. "We've planted a seed, and we're going to follow up on that."

Karen Strach, director of programs for the local food bank, appreciates distributing the fresh produce to clients and is looking forward to more. “It gets into every nook and cranny of the county,” she said. “It’s a big help.”

A food pantry for students

Six students were waiting in the basement of Freeborn Hall on campus for The Pantry to open at 10 a.m. on a recent Monday. Lucky Hang, who just completed his freshman year, made what has become an almost daily visit to The Pantry. “I try to utilize every opportunity I can,” he said.

Hang is the son of a physical laborer, the oldest of six children and the first in his family to attend university. A recipient of financial aid, Hang commutes to school from the family’s home in Sacramento so he can save money and be of help to his family.

“I do my best to support my family while doing my best in college,” he said. “That’s the responsibility I carry as the oldest child.”

Concerned students opened The Pantry in 2011amid state budget cuts and tuition increases. Over the winter and spring quarters, it had approximately 5,580 client visits, an average of more than 250 a week.

Students just show their UC Davis identification card to choose items up to a value of three points daily: a large box of ravioli for three points; a jar of peanut butter or a box of cereal for two points; individual servings of oatmeal, canned green beans or ramen for one point.

Although The Pantry operates as a unit of the Associated Students of UC Davis, it gets 90 percent of its funding and food through community donations. As a partner agency of the Yolo Food Bank, it is able to buy food at up to19 cents a pound. And while health and safety regulations restrict the food offerings to nonperishables, fresh produce from the Student Farm and other sources is regularly available just outside the pantry's service window.

UC's Student Food Access and Security Study — to be discussed at the UC Board of Regents meeting on Wednesday, July 21 — found 19 percent of UC students indicated they had "very low" food security, which the U.S. Department of Agriculture defines as experiencing reduced food intake at times due to limited resources. An additional 23 per cent were characterized as having "low" food security, defined as reduced quality, variety or desirability of diet, with little or no indication of reduced food intake.

Among nearly 8,400 UC Davis students who responded to the 2014 UC Undergraduate Experience Survey, 26 percent said they occasionally skipped meals to save money. About 11 percent skipped meals somewhat often, while 9 percent were doing it often and 6 percent here doing it very often.

“We really need to de-stigmatize the idea of coming to a place to get food.” — Erika Maria Hapa, former director of The Pantry.

Erika Maria Hapa, who served as pantry director this past year, talked about a perceived stigma that may keep some students from turning to The Pantry or other resources. “There may be a lot of students who feel too embarrassed to come,” she said. “Sometimes we do see it in their faces. Some casually walk by The Pantry and then come back.

“We really need to de-stigmatize the idea of coming to a place to get food,” said Hapa, who graduated in June with a degree in human development.

Fruit and Veggie Up! keeps it fresh

Senior Eleni Jacobson of Foster City, California, looked among the free, but slightly imperfect produce available to students on the third floor of the Student Health and Wellness Center. She chose apples, tangerines and potatoes. 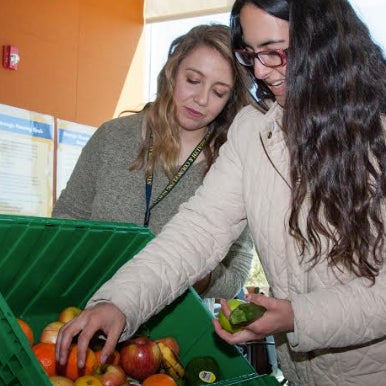 Listen to a student talk about using the program

Jacobson is among the UC Davis students who have benefited from more than 5,500 pounds of produce offered through Fruit and Veggie Up!, which began last August.

The Nugget Market on Mace Boulevard in Davis donates surplus produce to the program. Student volunteers pick it up, and it is available at the student health center on Tuesdays and Wednesdays and at The Pantry on Fridays.

Aria Wexler, a senior clinical nutrition major, coordinates Fruit and Veggie Up! as a nutrition and food access assistant of Student Health and Counseling Services and as one of four students at UC Davis who are UC Global Food Initiative Student Fellows.

The UC Global Food Initiative, launched in 2014, is marshaling the university’s resources to address the critical issue of how to sustainably and nutritiously feed a world population expected to reach 8 billion by 2025. One of its three pillars embraces food security and access at the campus level.

Supported by the $4,000 the fellowship provides, Wexler’s project is focused on food advocacy and nutrition education for students, including those who may be food insecure. She has developed nutrition and other educational materials that are available for those who visit Fruit and Veggie Up.

Wexler is researching how best to get students involved in food advocacy and nutrition education programs. As an ambassador for the Global Food Initiative, she participates in its leadership meetings and collaborates on projects with other fellows.

“It’s a common misunderstanding that college students are fine because they have the university to support them,” Wexler said. For some, she added, “it’s a decision between buying a textbook and having food for the next two weeks.”

Produce goes from farm to pantry

Another student-grown program that provides fresh produce to The Pantry started in 2014 in signature UC Davis style — with a bicycle.

At the iconic Student Farm, students learn to grow produce sustainably and sell it for use in campus dining halls or through subscription market baskets in the community. Three students used a $1,500 grant from Dining Services to start Fresh Focus to collect some of what is left — surplus, blemished or odd-shaped produce — and deliver it by bicycle to The Pantry.

The Coffee House dining facility on campus now helps with the delivery when it picks up its own produce from the farm, but the motivation is still the same as when Kiko Barr, now a graduate, provided the pedal power.

"Our small dream," she said, "is that this will become a model for other universities, food banks and farms to be able to bring more fresh produce to everyone."

Community in the kitchen

The Hillel House’s commercial kitchen is a place of joy for the heart and the senses. There is the buzz of about a dozen aproned students, laughter and an upbeat playlist, hands shaping sticky dough into braids, the bright jalapeno green and strawberry red fillings, the warmth of the ovens — and the sweet aroma of bread baking.

It is the UC Davis chapter of Challah for Hunger and volunteers coming together as a family, baking the traditional Jewish bread and raising money to address hunger here in Yolo County and thousands of miles away.

President Elissa Goldman said the student organization makes nearly 100 loaves of challah a week and sells them for $5 apiece. Each quarter the group splits about $2,400 in proceeds between the Yolo Food Bank and Mazon, a nonprofit working to end hunger in the United States and Israel.

“When we tally up the total at the end of the quarter, that’s amazing,” said the microbiology major from Sherman Oaks, California. “It makes us feel like we’re making a difference here.”

Eggs from field to food bank

Within the campus’s Robert Mondavi Institute for Wine and Food Science, hundreds of eggs are stacked in cardboard flats in a processing plant's large food cooler. But despite the industrial-like setting, here, it is personal. The labeling that identifies the size and grade of the eggs also indicates who collected and washed them. On the label for one stack is handwritten “Hannah.”

Hannah Southgate, an animal science major, is among the dozens of UC Davis students who are involved in a research project with 150 laying chickens that provides some 800 eggs to the Yolo Food Bank weekly. The Pastured Poultry Farm, a project of the School of Veterinary Medicine and partners, is a living laboratory where students and researchers hope to develop solutions benefiting pasture-based poultry farms and backyard flocks.

The farm started operations in February, and the food bank loves being able to distribute the eggs, valued as a good source of protein — some directly to clients but most to partner agencies that provide meals. “It’s great to have a steady supply,” said the Yolo Food Bank's Strach. “Clients get so excited.”

The students from the Pastured Poultry Farm do not know Donald Bellanger of Woodland, nor does he know them. But their lives have touched.

“I come here because sometimes I don’t have enough food,” said the single man. “I kind of struggle here and there. I have no other resources.”

“People who are willing to work to help homeless people or people who don’t have enough food, they’re so nice.” — Donald Bellanger

From an industrial fridge inside the church’s food closet, a volunteer took a carton of eggs and added it to the top of one of Bellanger’s two bags of groceries.

Then he learned how the eggs got from a UC Davis research field to him. “Wow,” Bellanger said. “People who are willing to work to help homeless people or people who don’t have enough food, they’re so nice.”