Lake Tahoe experienced a year like no other in 2015, according to scientists from the UC Davis Tahoe Environmental Research Center in its annual Tahoe: State of the Lake Report, released today.

The report summarizes how natural forces, long-term change and human actions have affected Lake Tahoe’s clarity, physics, chemistry and biology over time. It presents data collected in 2015 and puts them in the context of the long-term record.

Continued warm and dry conditions contributed to several record-breaking measurements. Among them:

Climate change: Precipitation was less than two-thirds of average. Only 6.5 percent of it fell as snow during the 2015 Water Year, which runs from Oct. 1, 2014 to Sept. 30, 2015 -- the lowest amount ever recorded. Only 24 days had below-freezing average air temperatures, the lowest on record.

The authors write that in the past four years, “the lake has warmed at an alarming rate of over 0.3 F per year.” That’s 15 times faster than the long-term warming rate.

Also, the average surface temperature was the warmest on record, 53.3 F.

Mixing: Deep mixing that a lake undergoes in the winter is crucial for adding oxygen to the depths and redistributing nitrogen that tends to accumulate at the bottom. However, Lake Tahoe failed to mix to its full depth for the fourth year in a row. Its mixing depth in 2015 of 262 feet is the lowest recorded.

This lack of deep mixing also led to the highest average nitrate levels ever recorded in the lake, 20.6 micrograms per liter. This marked a recent shift from the relatively constant nitrate concentrations that persisted for much of the 35-year record.

Algae and lake level: Attached algae around the lake’s margins were at record-low levels, due largely to the low lake level, which fell by 9 inches in 2015. Lake Tahoe was below the natural rim for all but one day in 2015, so no water could flow into the Truckee River.

“The occurrence of rising air temperatures at Lake Tahoe has been known about for many years now, and with it the warming of the lake,” said Geoff Schladow, director of the UC Davis Tahoe Environmental Research Center. “What is different this year is that we are seeing more aspects of the lake’s internal physics changing, and that is bound to alter the ecology.”

Average annual clarity was 73.1 feet in 2015, a 4.8-foot decrease from the previous year, a measurement announced in April 2016. The decline was due in part to warmer inflowing water. However, it was still more than 9 feet greater than the lowest recorded average of 64.1 feet in 1997. The measurement marks the depth at which a 10-inch white disk, called a Secchi disk, remains visible when lowered into the water. 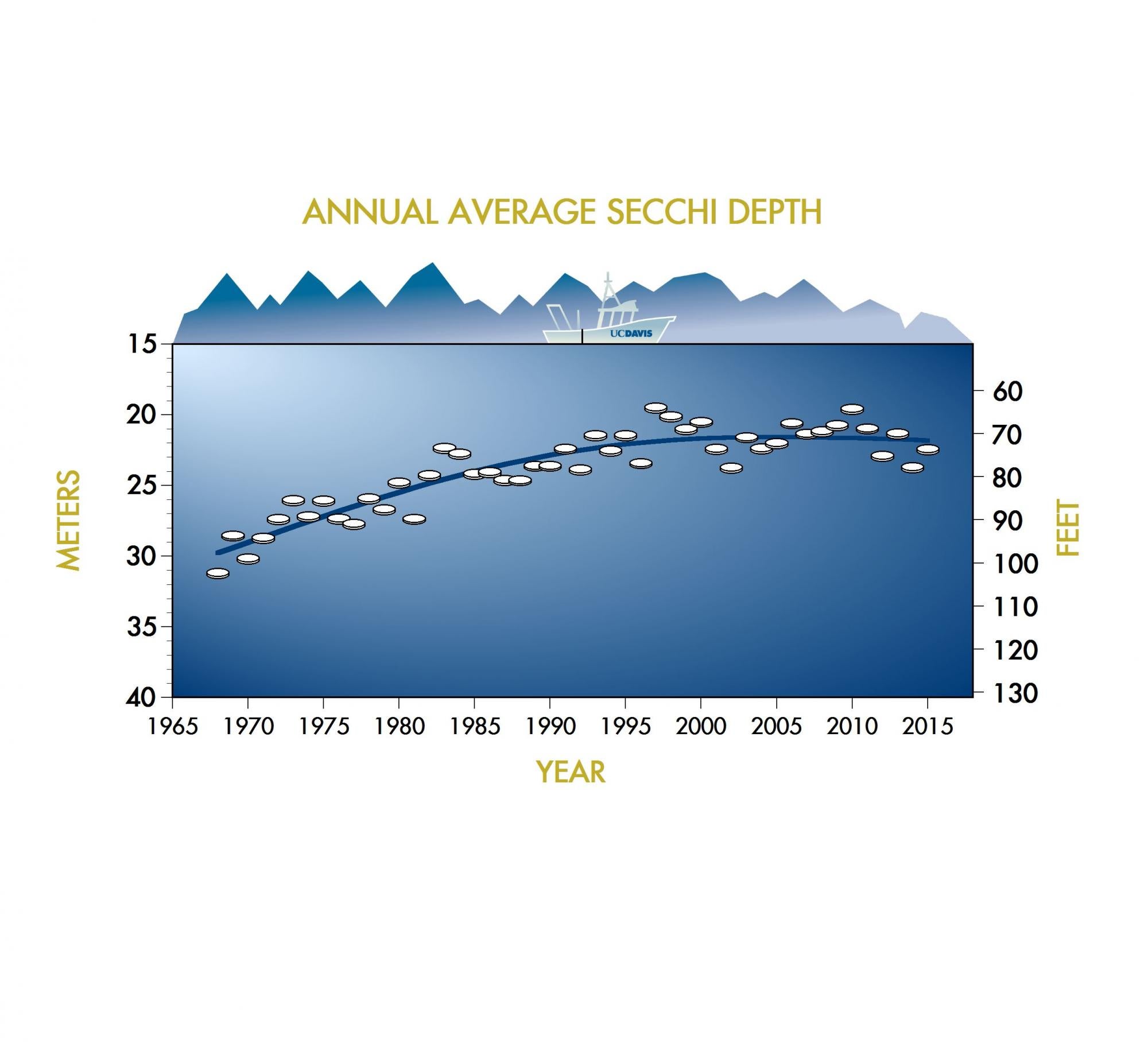 The UC Davis Tahoe: State of the Lake report informs nonscientists about the most important factors affecting lake health and helps influence decisions about ecosystem restoration and management within the Lake Tahoe Basin.

This report is available on the UC Davis Tahoe Environmental Research Center website.