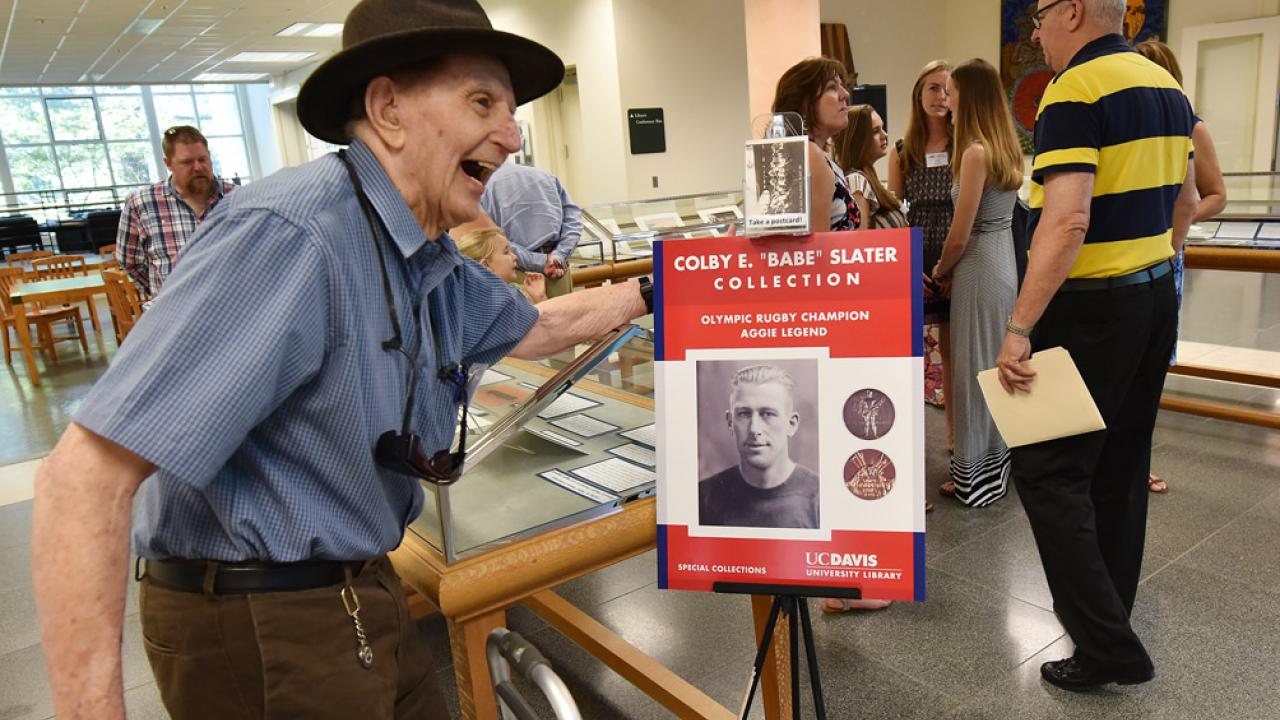 It may come as a surprise to even the most avid sports fans, but when the U.S. men’s rugby team takes the field this summer in the Rio Olympics, they’ll actually be defending their title.

Often thought of as a foreign sport, rugby actually enjoys a rich history in the United States, especially here in Northern California where a local sporting legend helped the United States to win two gold medals in the Olympic Games nearly a century ago.

Rugby was last included in the 1924 Paris Olympics, but now that the sport is back, some of its history is on display at Shields Library at UC Davis.

The displays showed trinkets and mementos from Slater’s life, including his two gold medals, programs and newspaper clippings from the Olympics and personal letters.

Slater grew up in the early 1900s in Northern California at a time when football was thought to be dangerous and thus rugby was widely played throughout the area.

After a standout high school career at Berkeley High, the 6-foot-3, 220-pound Slater enrolled in what was then called the University Farm School here in Davis, playing rugby in addition to football, basketball and baseball.

“In 1915, that’s a real specimen of an athlete,” joked Mike Purcell, one of the event’s speakers. Purcell is a former UC Davis men’s rugby head coach and a fellow member of the Rugby Hall of Fame. “It must have been amazing to see him run around the field.”

Slater graduated from the University Farm in 1917 and enlisted in the military, spending nearly a year in the medical corps in France and Belgium during World War I before returning to set up residence in nearby Woodland.

When it came time to pick a rugby team for the United States for the 1920 Antwerp Olympics, the squad was selected from exclusively California.

They boarded a ship to Belgium to take on the only other participant in the games: heavily favored France.

The United States upset France 8-0 to take home gold, and four years later faced a rematch in the Olympic final on France’s home turf, with Slater captaining the American side.

Performances from Colby Slater and his brother Norman helped the Yanks to a 17-3 victory in front of 50,000 fans, where they were booed by the French crowd in what would be the sport’s last hurrah for some time in the Olympics.

“The pundits credited the raw athleticism of the team (as the reason for victory),” Purcell said. “It was a team full of a bunch of studs.”

One year after the U.S. victory, Baron de Coubertin was replaced as the International Olympic Committee president by Count Baillet-Lator, who was no fan of rugby, abolishing it from the games.

After earning his second gold medal, Slater retired from athletics and moved to Clarksburg to become a farmer. He married and had a daughter, Marilyn, and later died in 1965.

Marilyn followed her father to UC Davis, where she met and married Richard “Dick” McCapes, who was on hand Saturday for the ceremony.

A few years before her passing, Marilyn began to preserve what is now known as the Colby E. ‘Babe’ Slater Collection of historic artifacts with help from the Special Collections department.

“Neither Marilyn nor I had a clue what the Special Collections was,” McCapes said after he was presented with a framed poster of the event. “It’s been a great 13 years finding out.”

The rugby this summer will be different than that of the previous Olympics, playing short games with seven-man squads rather than the traditional 15-man versions.

But regardless of how it looks on the field, its history will always have a special place in the heart of Northern California, where a man named Babe helped the United States become the world’s best at a game it has hardly recognized since.

Reprinted with permission of The Davis Enterprise.