During his nearly 9½ years as provost and executive vice chancellor, Ralph J. Hexter has been the calm before, during and after the storm.

It is a trait that people mention often when talking about how he has carried himself as UC Davis’ chief academic officer and chief operating officer. They also note the calm he exhibited when he served as acting chancellor and then interim chancellor for just over 15 months, 2016-17, shepherding the university through the transition from one chancellor to another.

The Office of Strategic Communications honors Provost and Executive Vice Chancellor Hexter with a special webpage comprising leadership highlights, personal milestones, a photo gallery, a “Hexter Glossary,” and, in their own words, in a video: Chancellor Gary S. May, deans and others talking about Hexter and his contributions to UC Davis.

Mrak Hall will say goodbye to two other top administrators at the end of the academic year. Dateline has stories on each of them:

Today, as he prepares to step down from his administrative post, he is as calm and cool as ever. This might have something to do with the fact he is staying put at UC Davis as a Distinguished Professor in the departments of Classics and Comparative Literature.

“I get very anxious when things are uncertain, but actually, in the moment, or when I know that people are relying on me, I just really work to act calm,” Hexter said with a laugh during an interview over Zoom last week. “And ... I feel that that’s my role, that I have to be.

“Occasionally I do get flustered, but only occasionally. I really have worked at trying to project calm, and I guess I am mostly calm. ... It’s my job.”

Interestingly, the job of provost is one that, early in his administrative career, Hexter did not want any part of. “When I was a dean at Berkeley ... I thought, Oh, what a miserable job that would be. All you’re doing is dealing with impossible money questions and impossible personnel questions. It’s just troubleshooting. And I was enjoying the development work, the fundraising that one does as the dean as well.

“So I decided that, for me, I wanted to skip provost.”

And he did, going from Berkeley to the presidency of Hampshire College, a small, liberal arts school in Amherst, Massachusetts, in 2005.

Yes, it was unusual that he had skipped being provost. But the announcement of his appointment was, for its time, even more unusual. Hexter and Hampshire had agreed to identify the new president as gay, one of the few openly gay university presidents at the time.

“I was one of those people who was fortunate, in a way, to be able to come out without a great deal of turmoil,” said Hexter, who had come out by his sophomore year in college (where he was the second president of the Harvard-Radcliffe Gay Students Association). “And that was within a few years of Stonewall, so it was a very different world.

“But, in any event, I felt that I had the privilege and the obligation ... in being out at all points.” Which led to the Hampshire announcement.

Before then, while at UC Berkeley, he wondered if he would ever get that far in academic leadership. Sure, he was a dean (Division of Arts and Humanities, 1998-2005) and executive dean (College of Letters and Science, 2002-05), but he did not know of any gay presidents — and, he thought, if being a dean was the path to becoming a college president or university chancellor, well, then he had better think again.

“I realized there was a glass ceiling problem,” said Hexter, who in the early 2000s would host a breakout session for deans at a meeting of the Association of American Universities, to discuss “other glass ceilings.”

“I don’t by any means want to suggest that I stepped out to become a college president in order to prove something,” he said. But, as a dean at Berkeley, in his mid-40s with a lot of educational capital to spend, “I really did think in terms of wanting to contribute to breaking that glass ceiling.”

And then the Hampshire post came along. Some of Hexter’s colleagues thought he should be shooting for a grander school, but he was not convinced it was possible at the time. “There were a few others out (as college leaders), but they were not generally at institutions that really had a national profile of any sort,” he said.

While serving as the Hampshire president, Hexter joined eight other university leaders in founding LGBTQ Presidents in Higher Education, which today has a membership of around 100. The LGBTQ glass ceiling has been “quite shattered” in most sectors of higher education, Hexter said, adding that he is proud to have helped “blaze the way for others.”

After nearly 5½ years at Hampshire, Hexter became provost and executive vice chancellor at UC Davis on Jan. 1, 2011, taking up the kind of job that he had dismissed out of hand years earlier. “I found a way here to make it ... very creative,” he said.

For example, with his Hiring Investment Program, or HIP, the central campus retains a portion of new-faculty funding that would otherwise go to the colleges, schools and departments, instead allocating it for groups of faculty to propose hiring that either transcends those traditional boundaries or extends their range into critical new areas. He also headed the 2020 Initiative, under which enrollment grew by about 5,000 and includes related construction projects. 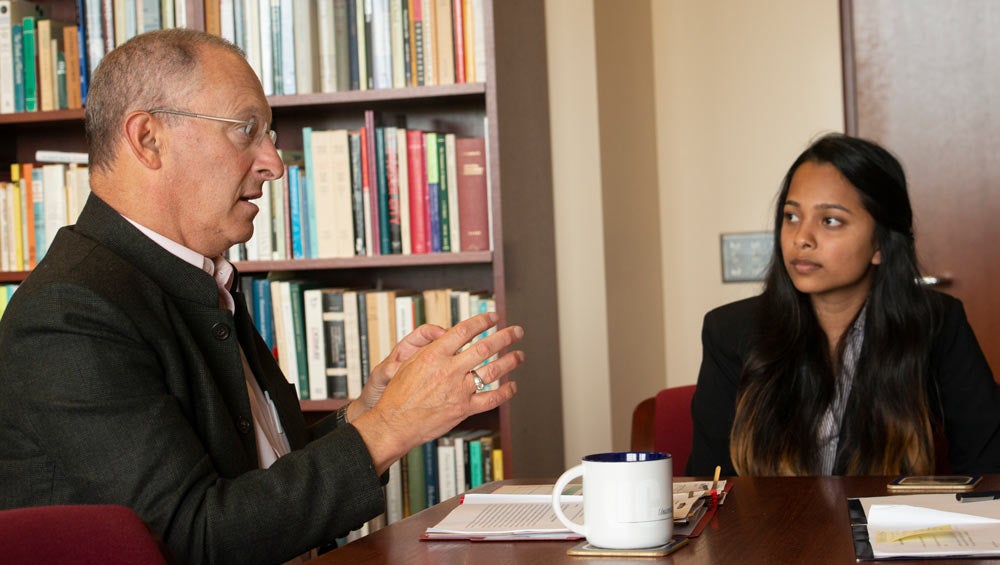 In conversation with student Namrata Kumar on her day in the Leadership Shadowing Program. (Gregory Urquiaga/UC Davis) 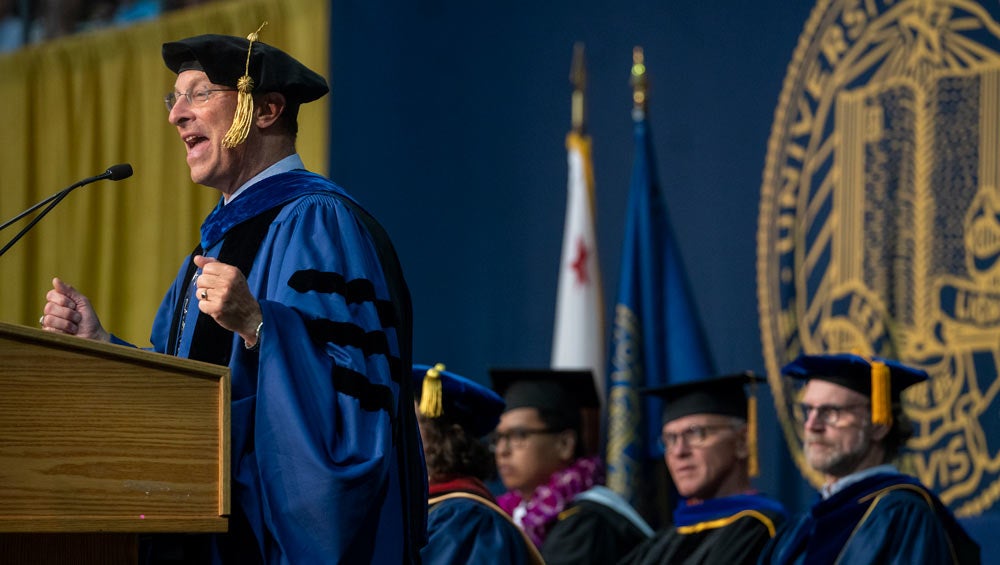 He founded the UC Davis Forums on the Public University and the Social Good, and established the Office of Public Scholarship and Engagement. He also has found satisfaction in helping programs “move along and become more visible” — such as UC Davis’ international profile, under the direction of Global Affairs.

Hexter said he has been fortunate to serve as provost “pretty much between two crises,” the second one being the coronavirus. Sure, he has been part of the response so far, but he sees great new challenges ahead for his successor and the campus.

The other of his bookend crises, within a year of his arrival, involved a student protest and the campus’s response to it, an incident that reverberated for years.

He eventually would become chancellor on a temporary basis, and, while people may credit him and restoring calm, Hexter has this view: “Really, I didn’t feel I did anything other than the fact that all of the reason for controversy just went away and stopped.”

He cited two other factors: “First of all, I think by and large the campus was doing good things before ... [that] we were going in the right direction,” he said. And, so, as the acting and interim chancellor, he continued to emphasize the great strengths of the campus.

There’s a lot to be said for continuity, he said, not to mention the “tremendous team ... faculty, staff and everyone who really work so hard and have such a positive impact.”

Secondly, “It’s somewhat unusual that a provost has had the experience of being a president before, even of a much smaller and different institution. Nonetheless, it was sort of ironic that, and not unhelpful, that I had had that experience before, so there were some things about it that were probably easier for me to step back into, that might have been more challenging for somebody else.”

Projects years in the making

In announcing that he would step down at the end of the 2019-20 academic year, Hexter noted that, since the fall of 1990, “there have been only two months when I did not also have a major administrative job in one institution or another.”

“The University of California hired me to teach and do research in classics and comparative literature,” he said, and he is happy to once again devote all his focus to that job. In a preview of what’s to come, he published a book in May, Appendix Ovidiana, a collection of 33 Latin poems that he and two postdocs edited and translated. The poems, ascribed to Ovid in the Middle Ages, are now believed to have been composed by later, largely anonymous, poets who lived in antiquity and the Middle Ages.

He worked on the volume for decades, and he has another project — about two 15th-century plays — that he has worked on for just as long, and that he aims to finish during his sabbatical. “There have been a lot of weekends and, occasionally, when deadlines loom, late nights or very early mornings,” he said about how he fits his research and writing into his schedule as an administrator. He’s also helped by often collaborating with others, so that one person works on the project, then hands it off to another collaborator, and so on and so on, in an iterative process of constant review and improvement.

He will spend his sabbatical at home with his partner of 40 years and husband of 13 years, Manfred Kollmeier (they’re pictured above, in India). They have a place outside of Woodland with two Arabian horses and an Aussiedoodle named Lennon, less than a year old.

Hexter also plans to catch up on his reading. “I’ve kept a list for years now of books I want to read, more than I could read in a year.”

He’s already been in contact with his department chairs, “and at some point this summer we’ll start talking about what I would teach the following year (2021-22).”

“A lot of people say, Provost is the one who says ‘no,’” Hexter said. “[But] interestingly enough, though I sometimes say ‘no,’ that’s not how I think of the job. I actually think of the job as helping people do things that they want to do.”

It is a job he has grown to love, he said, “figuring out how can I help us get to some kind of ‘yes.’”

As a multitasker, Hexter said, he will miss being “in the thick of things [and having] the opportunity to be with so many people, faculty, staff, students who are working on exciting projects.”

“I’m going to be much more alone with my scholarship. And I love books and studying, but, at the same time, I think I am going to miss a lot of the wonderful human interactions that come with your life in Mrak every day.”

The resolution cites Hexter’s “expertise in managing a wide-ranging portfolio of oversight responsibilities,” and further commends him for “advancing strategic goals that helped to bolster UC Davis’ reputation as a top-tier American public university.”

“Through his administrative leadership,” the resolution continues, “Dr. Hexter also contributed to UC Davis’ significant growth in enrollment, number of faculty positions and campus infrastructure resulting from the 2020 Initiative and related programs; recruited all but one of the 17 current deans and vice provosts as well as the new associate vice chancellor for Enrollment Management; and drew praise from the Academic Senate’s Davis Division for his commitment to shared governance and his passion for the entirety of the university’s academic enterprise.”