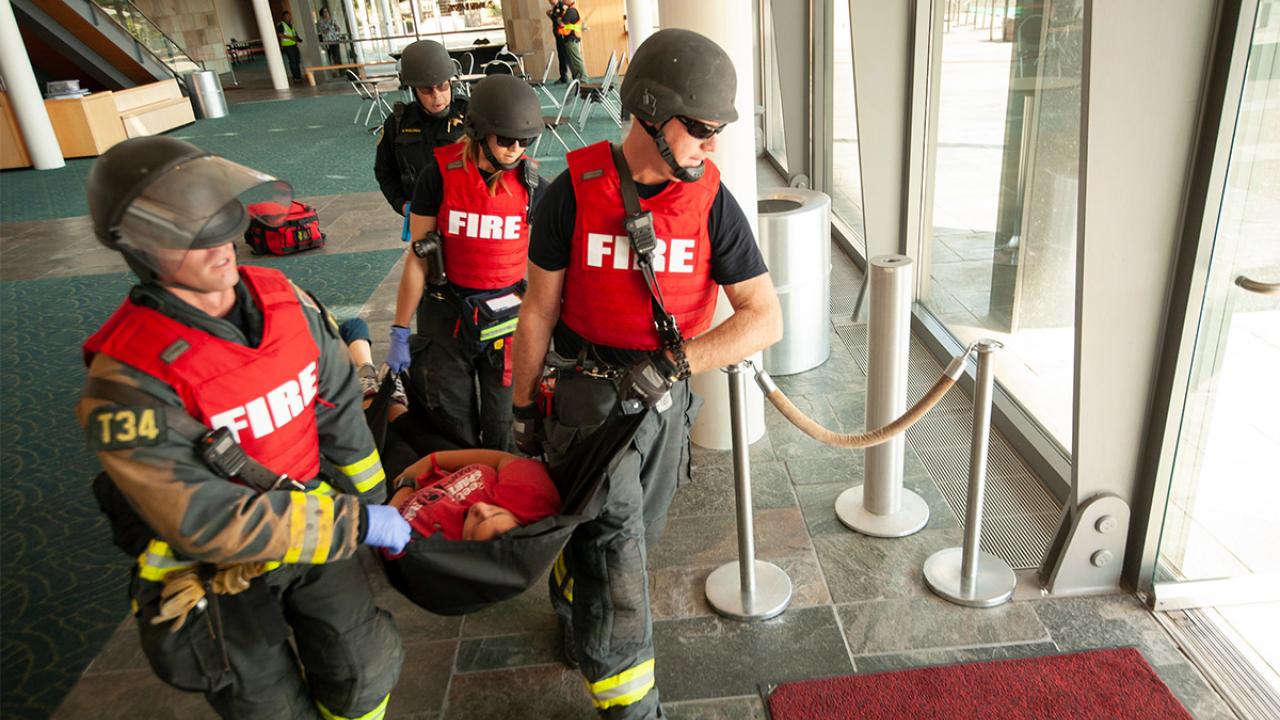 “Shots fired! There’s an active shooter in the Mondavi.”

This simulated 911 call summoned the UC Davis Police and Fire departments to the Mondavi Center for the Performing Arts last Tuesday and Thursday (Sept. 4 and 6) to practice rapid-entry techniques in the event of a mass shooting.

Police officers soon entered the building in search of the shooter, while relaying information to arriving colleagues about the number and general condition of the victims the officers encountered en route to neutralizing the shooter.

With the recent arrival of bright red ballistic vests and ballistic helmets, firefighters are now equipped with some basic protection that allows them to enter a shooting scene, under police protection, much sooner than before — all in the interest of getting to patients as soon as possible.

Updates about the Sept. 20 exercise

UC Davis regularly offers active-shooter preparedness training to students, staff and faculty, but it’s also critical for first- responders to train together. “Active shootings are rare on college campuses, but it’s important for all of us to remain aware and prepared for such situations,” Police Chief Joseph Farrow said. “If one occurs, it’s going to be UC Davis police and UC Davis fire personnel arriving first on the scene, and how they are trained and prepared will be of high significance.”

Police and fire officials have long discussed the need to get medics into shooting scenes more quickly. In keeping with leading practices emerging from recent mass shootings and under the direction and protection of police officers, UC Davis firefighters will now enter active-shootings before they end, in order to quickly remove victims most likely to respond to treatment.

“Firefighters don’t go in where any actual bullets are flying,” said Scott Hatcher, fire captain and training coordinator. “This is a serious change for our department and one our firefighters support, because it allows us to provide care more quickly and could potentially save lives.”

A Rescue Task Force, when appropriate

A team of firefighters and at least two officers are called a Rescue Task Force. Officers will form one to guide firefighters to the injured, only when they have determined they can provide safe cover to firefighters.

In the past, firefighters would not enter a shooting scene until officers deemed it clear — and that could delay treatment 45 minutes. Last week’s drills tested first-responders’ ability to move as a compact team to quickly administer treatment and evacuate the injured.

The Mondavi Center itself was a major player in this training. It’s a large building, with lots of nooks and crannies, and performing arts venues are common locations for these attacks. Adrian Galindo, assistant production manager, volunteered the Mondavi Center for the training to test out the new security policy he helped develop after completing a two-year program on venue safety and security.

“We really want to make the Mondavi one of the safest venues around,” Galindo said. “We’ll need to make some adjustments to our security plan based on things that have come out of this training.”

Decisions about whether to lock doors or raise the lights in the main performing hall during an incident can have huge implications for responders and victims trying to flee, but can also hinder a shooter trying to inflict damage. Such are the considerations Galindo and his team will be discussing.

WORKSHOPS OPEN TO ALL

The next Active-Shooter Survival Workshop for faculty, staff and students is scheduled for Thursday, Oct. 25. These ongoing trainings provide the campus community with strategies to increase the likelihood of surviving an active-shooter incident. Register here.

The drills are the largest joint exercises ever conducted by the campus Police and Fire departments. All parties agreed that training together more frequently is imperative now that officers and firefighters will be moving side-by-side into shooting scenes to get to victims quickly, while doing everything necessary to keep the first-responders safe.