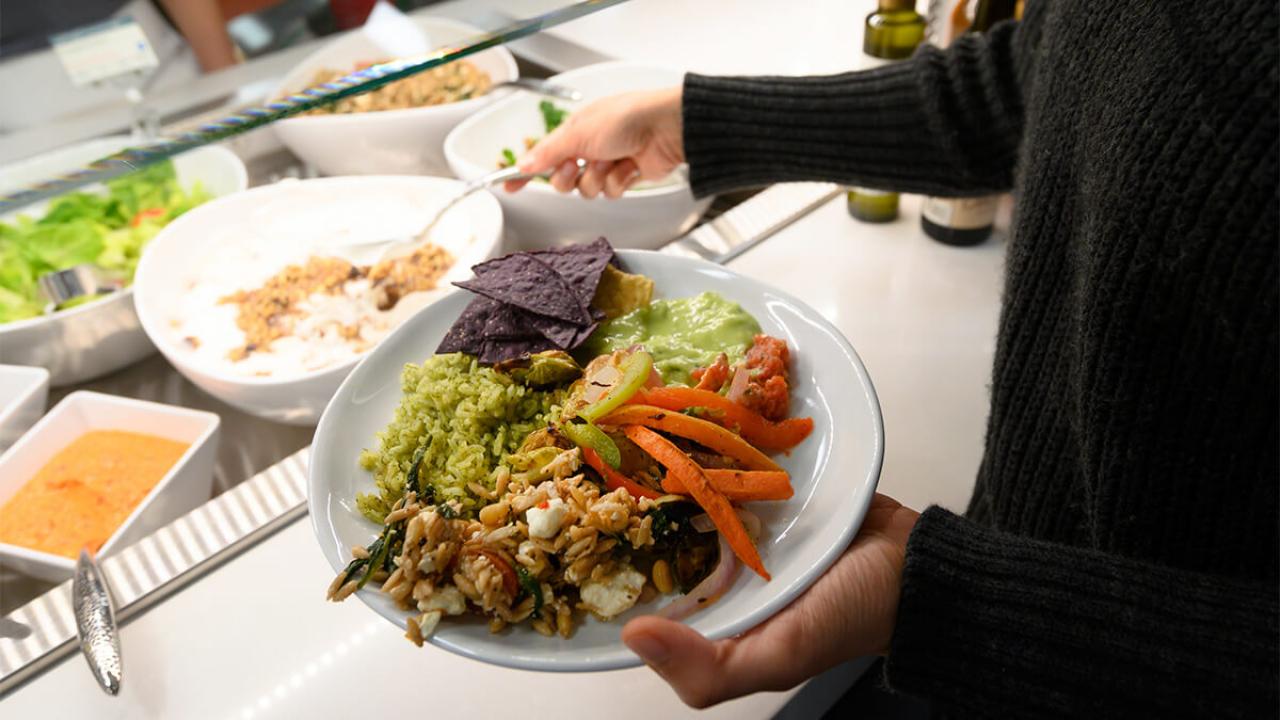 Latitude, a 500-seat dining commons with a separate retail café serving food to go, opens tomorrow (Jan. 15) on Bioletti Way south of Hutchison Drive, and will be open for lunch and dinner Mondays through Fridays.

Like other dining commons, it accepts meal plans and Aggie Cash but is also open to the general public. Off-campus visitors can park in nearby Lot 40. 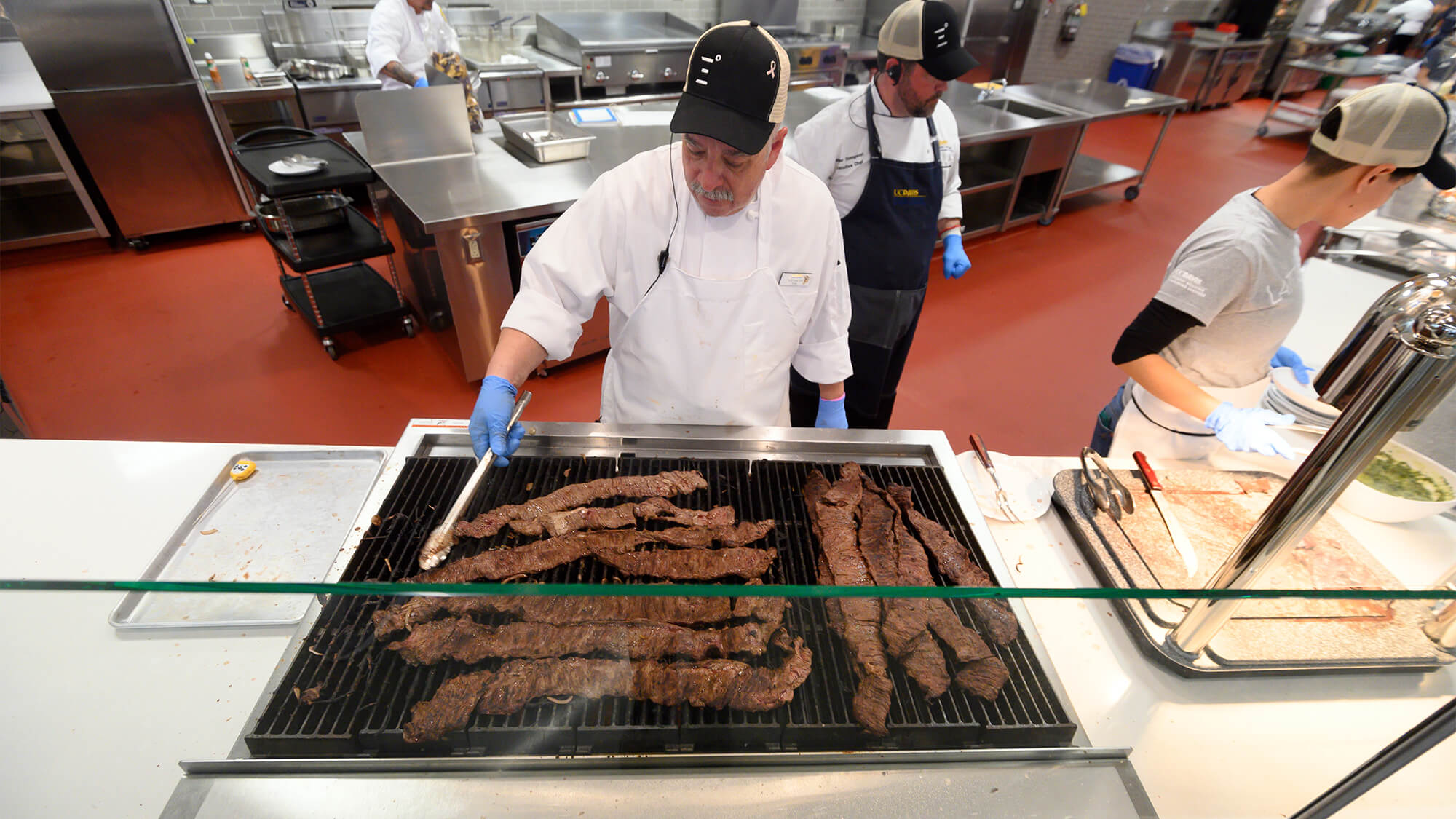 “We wanted to bring a sense of comfort for those from abroad and challenge those who haven’t been abroad,” he said.

The eatery has four platforms, dividing food into regions: Latin America, Asia, Europe and India and the Middle East.

“You’re not going to see cereal in here,” Brady said.

Roger Thompson, Latitude’s executive chef, said staff members spent a year developing more than 300 recipes, and now have a catalog of 90 dishes they can rotate in and out of the eatery’s largely open kitchen, where guests can watch Argentinian skirt steak being grilled or meat being sliced from a large cone for shawarma.

He said to focus on authentic food, he avoided some obvious choices.

“It’s a challenge to go away from what you immediately think of,” Thompson said. “I wanted to look at stuff that’s new to me, new to guests.”

The European station will serve items like rotisserie chicken, polenta and paella. Nearby, the shawarma selections will alternate between chicken and a beef-lamb mixture.

The Asia platform features staples like sushi, but Thompson is especially partial to Dining Services’ takes on honey walnut shrimp and ramen.

“We put a lot of love into it and you’ll taste it,” he said of the Japanese noodle dish. “It’s going to be super, super good.”

Kue Her, senior executive chef for Student Housing and Dining Services, said achieving the level of variety on display took a lot of brainstorming.

“All the dishes are coming out really well,” he said. “Every station’s got its own little niche to it.” 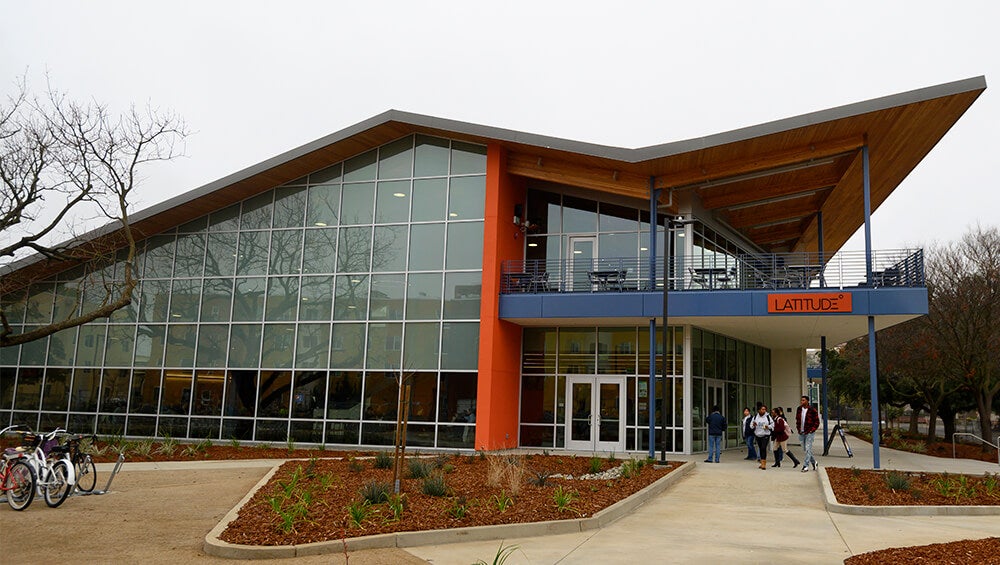 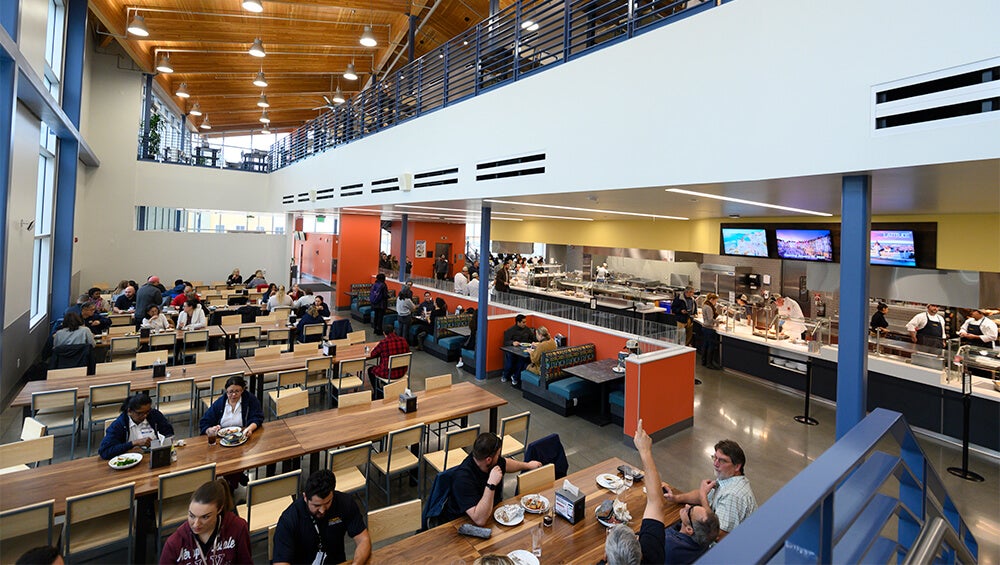 Some of those dishes came from recipe books or online research, while others came from very personal sources.

Becerra, assistant director of residential dining, was born in Colombia and grew up eating his mother’s ajiaco, a chicken and potato-based soup featuring guasca, an herb in the daisy family. There are no Colombian restaurants anywhere near Davis, so Becerra has only eaten it on holidays since moving to the United States in 1999.

His mother provided her recipe to Dining Services, and it will likely be served in Latitude sometime next quarter. Becerra said his mother, who now lives in Davis, came to campus for a taste test while the recipes were being developed.

“She loved it,” Becerra said. “We just have to source the right ingredients.”

While the main draw at Latitude may be its 500-seat, two-story dining area, its retail side brings another option to the Tercero area of campus.

Visitors there can choose from a variety of premade options like sushi, paninis and wraps, or can opt for something from its hot bar sections, where noodles with a variety of protein choices and other rotating items are sold by the ounce.

The retail side of Latitude, located on the north side of the building, also features drip coffee, a smoothie bar, fresh-squeezed juices, gelato and macaroons.

Read more about the dining and food options on campus.