Chancellor Gary S. May and UC President Janet Napolitano fought back last week with sharp words and a lawsuit — the first by a university — against the Trump administration’s stated intention to end the Deferred Action for Childhood Arrivals (DACA) program.

Meanwhile, Napolitano and all of the UC chancellors, as well as the UC Immigrant Legal Services Center, are urging DACA beneficiaries whose DACA status will expire by March 5, 2018, to apply for renewal by Oct. 5 to extend their DACA status for two years. See more renewal information below. 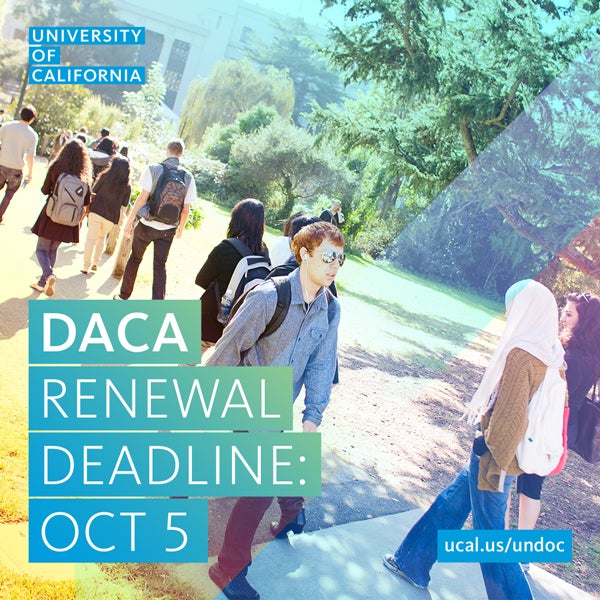 Chancellor May responded quickly with a statement: “I am gravely disappointed in today’s White House decision to end a program that allows undocumented immigrants who came to the United States as small children to fulfill their dream of a college education without fear of deportation.

“UC Davis is home to a dedicated community of DACA students from across the globe. Turning our backs on these students is not who we are. At UC Davis, we open our doors to the world and give the best and brightest a chance to shine, no matter where they happened to be born.”

Friday (Sept. 9), Napolitano joined with the Board of Regents in taking the case to federal court, Northern District of California. Then, on Monday (Sept. 11), the state of California filed its own lawsuit — and UC declared its full support.

UC alleges in its lawsuit that the government’s decision to rescind DACA violates the constitutional rights of both the university and its students, and would force young immigrants to leave the only country they call home, “based on nothing more than unreasoned executive whim.”

The international legal firm Covington & Burling LLP is representing the university on a pro bono basis, Napolitano noted in a UC news release about the lawsuit.

The university’s lawsuit names as defendants the Department of Homeland Security and its acting secretary, Elaine Duke. Napolitano, as secretary of Homeland Security under President Barack Obama, signed the directive that created the Deferred Action for Childhood Arrivals program in 2012.

“My anger at DACA’s rescission doesn’t stem from pride in the work done to create this program, although I am very proud of the program,” Napolitano wrote in a Sept. 10 opinion column in the Los Angeles Times. “Instead, it is motivated by the harm that eliminating DACA will cause to the so-called Dreamers at the University of California, the 10-campus system I now lead, and to the nearly 800,000 Dreamers across our country.”

“As UC president, I’ve seen the exceptional contributions Dreamers are making to the nation. They represent the very best of our country. All DACA recipients have gone through a rigorous application process that verifies they are productive members of our communities and have clean records, including more than 100,000 who have had their applications renewed by the Trump administration.”

“Even if DACA is phased out permanently on March 5, 2018, applying for a renewal no later than Oct. 5, 2017, is the best opportunity to obtain two more years of protection against deportation and legal authorization to work,” Napolitano and the chancellors said in a letter today (Sept. 12) to the UC community.

“With fewer than 30 days before this deadline, we encourage everyone whose DACA permit expires in the next six months (by March 5) to act quickly. And please share this renewal application deadline with others who could benefit.”

Napolitano and the chancellors also encouraged “every member of the UC community who currently has DACA to discuss your circumstances with immigration counsel,” via the UC Immigrant Legal Services Center, email ucimm@law.ucdavis.edu.

Following Attorney General Sessions’ announcement, the UC Immigrant Legal Services Center posted a “this is what it means” document that includes DACA renewal information and a caution: “If you are out of the country with DACA-based advance parole, we encourage you to work with an attorney and return to the United States as soon as practicable,” the document states. It adds: “You can no longer apply for advance parole to travel outside the country. If you have a pending advance parole associated with DACA, it will be closed and your fee refunded.”

Continued support for our Dreamers

In a statement today (Sept. 12), UC said it is “grateful that the governor and the Legislature have agreed on a plan to provide an additional $1 million in funding for UC’s Dream Loan Program, which helps many of our DACA recipients finance their college education. … The university is thankful and confident that this additional state funding will help our Dreamers achieve their ambitious educational goals."

The University of California has an estimated 4,000 undocumented students across its 10 campuses, including an unknown number who rely upon DACA.

The lawsuit is just one of the steps UC has taken to protect these Dreamers since the Trump administration’s announcement.

Napolitano has pledged that UC will continue to provide legal and academic support services to its Dreamers, along with continuing its Dream Loan Program and allowing California-resident Dreamers to pay in-state tuition.

UC has also been aggressively lobbying Congress to find a permanent legislative solution that would give DACA recipients a clear path toward legal citizenship. And it has been encouraging supporters and allies to join in the effort.

Chancellor May is on board: “I stand firmly in support of these students and call on Congress to rise in defense of the DACA program to immediately pass bipartisan legislation that would provide a permanent solution for our students.”

Faculty from the School of Law have been quoted widely about the government’s decision on DACA.

Professor Rose Cuison Villazor published an op-ed in The New York Times, writing that ending DACA protections raises many questions, including the issue of what the government will do with information that DACA program participants provided in their applications.

“Dreamers divulged information to the government, expecting that their information would not be shared,” Villazor wrote. “The information includes not only potentially incriminating information like date of initial entry and length of stay in the United States, but also details like their names, addresses, school information and Social Security numbers — precisely what the government needs to locate and detain them quickly.”

Using such information against the Dreamers would amount to entrapment, Villazor wrote, and “United States Citizenship and Immigration Services, which administers DACA, should delete all their information.”

Read more of what School of Law faculty members are saying.