Rainbow papayas, non-bruising potatoes, pink pineapples, salmon and beer were just some of the GMO (genetically modified organism) foods served at an all-GMO dinner in Davis. The dinner was a prelude to the UC Davis-hosted international Transgenic Animal Research Conference, which focuses on new developments in genetic engineering of animals.

Consumers may be surprised to learn many of these foods are GMOs, or what scientists call genetically engineered food. Store shelves are now filled with food items with a “Non-GMO” label. The label has helped stoke fears among many consumers that something about GMO food must be bad for people or the environment. It didn’t help that large agrochemical companies were among the first to produce GMO crops, which were designed to benefit farmers growing the crops by protecting them from insects and weeds. But the potential consumer benefits of GMO foods have never been greater, as a recent New York Times Magazine article pointed out.

To genetically engineer an organism, the genetic material (DNA) of one organism is altered and transferred to another organism to give it a desired characteristic. The resulting organism with the desired trait is referred to as transgenic or a GMO.

“It’s been frustrating for those of us working in the field, how long it’s taken genetically engineered food to get to market,” said UC Davis animal geneticist Alison Van Eenennaam, a cooperative extension specialist in the Department of Animal Science who hosted the dinner.  Regulatory hurdles mean it often takes years, if not decades, to bring the foods to the consumer. It’s one of the reasons Van Eenennaam held the all-GMO dinner, as a demonstration of the food’s benefits.

“There are some really useful products out there that are delicious and that fit well with people that are interested in the environment and sustainability. I think that narrative often doesn't get out there among all the fear mongering around the technology,” said Van Eenennaam.

The dinner was served to a small group of invited colleagues and friends before the conference. Family friend and chef, Roger Praplan of La Gare Restaurant in Santa Rosa, cooked the meal.

GMO salmon, 30 years in the making

No better time for a GMO dinner since the harvest of the first FDA-approved genetically engineered salmon came just this spring. The AquAdvantage Atlantic salmon, now available for commercial sale, expresses a gene from chinook ‘king’ salmon that enables it to get to market weight in less time.

“You can produce more fish for less resources and feed as they’re more efficient,” said James Murray, UC Davis emeritus professor and former chair of the Department of Animal Science. He said the fish are also grown in the United States in land-based recirculating aquaculture tanks, making it more sustainable. “Right now, when you go to the store to buy Atlantic salmon, you’re probably getting fish that were raised in Scotland, Norway or Chile with a huge transportation carbon footprint associated with them.” He said growing the fish locally in recirculating aquaculture tanks rather than in open sea cages is a more sustainable way to grow salmon.

The research to produce the first genetically engineered salmon began in 1989. Chef Praplan served up the salmon three ways, baked, in a pastry and as a tartare.

Researchers at Cornell University and the University of Hawaii began researching a genetically engineered papaya in 1984. It includes a gene that made the papaya plant resistant to ringspot virus, a disease that nearly wiped out all of Hawaii’s papaya crops.

The Rainbow papaya was commercialized in 1998 and now accounts for over 90 percent of papaya production. The papaya was served sliced and as a salsa for corn chips (or atop baked salmon).

Consumers are likely familiar with GMO corn. Corn and soy are the largest GMO crops in the U.S. While corn chips from the store were on the menu (to scoop the papaya salsa), so was Triplesweet Bt sweet corn. The corn is genetically engineered to express proteins that control insects such as the European corn borer and corn earworm. Praplan served the corn two ways: creamed and fried into corn cakes.

Russet potatoes are America’s favorite for french fries. White Russet potatoes are their genetically engineered counterpart. When cut or peeled, they stay white. They also don’t brown or bruise when being stored or transported, which cuts down on food waste. Another genetically engineered trait prevents the potato from forming acrylamide when subjected to high heat, such as when fried. Acrylamide is a probable carcinogen. The White Russets, commercially available since 2017, were served up two ways as well, as french fries and fried potato wedges.

Frying foods also requires lots of oil. Genetic engineering can make oils healthier. Heart Smart high omega-9 safflower cooking oil by Plenty foods has the highest amount of omega 9 (good fats) and the lowest amount of saturated fat (bad fats) compared to other oils. Chef Praplan said he noticed a difference in this safflower oil when cooking it. With its high smoke point, it didn’t evaporate as much. He said it brought out the earthy flavor of the potato.

Pinkglow and hazy, making it tasty

Dessert came late to the party via Fed Ex. Guests thought the Pinkglow pineapple was worth it though. Made by Del Monte, Pinkglow pineapples are sweeter, less acidic, juicy and have a cotton candy finish. They are, as you might expect, pink. They get their color from lycopene, which is the same natural pigment that gives watermelon its rosy color. 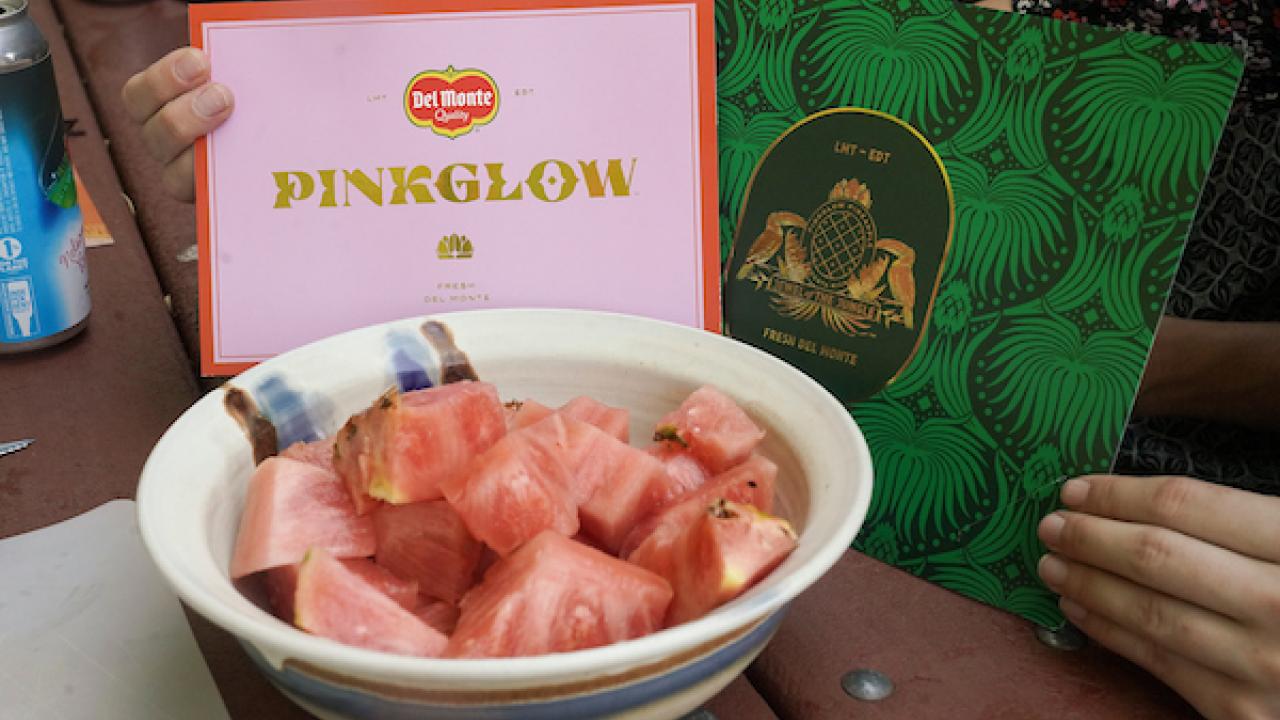 These pineapples, genetically engineered for taste, are grown in Costa Rica and hit U.S. shelves in late 2020. You can easily find these online, but after 16 years in the making, expect to pay a bit more than a regular pineapple. They are hand-harvested and sustainably farmed too, with each crown removed and replanted to generate a new crop. Pink pina colada anyone?

Speaking of drinks, dinner guests had a hazy one. The Nelson Baby! Hazy IPA (7% alcohol) from Alvarado Street Brewery is produced using a genetically engineered yeast from Berkeley Yeast. The yeast strain used in the beer is called ‘Tropics’ and was engineered to create a beer with enhanced flavor by creating a class of compounds commonly referred to as “thiols” in the beer and wine industry.

These compounds are well-known in the industry as desirable, and in beer, they ordinarily come from hops. This strain is engineered to produce these highly sought after “hoppy” flavors without having to add as many hops. The Tropics makes the hops in the IPA have a “tropical fruit expression,” one reviewer wrote. It’s very similar to the taste of sauvignon blanc wines from the Marlborough region of New Zealand.

“Everything was fantastic. I was so impressed,” said guest Megan Brown, a sixth generation California cattle and hog rancher and UC Davis alumna. She said the salmon and pineapple were her favorite part of the meal. “I’m so amazed by the technology and the work that go into GMOs, and I see the potential to make our lives better.”

She helped make the meal even more sustainable by taking the fish heads and other kitchen waste home to feed her pigs. She said they “squealed with delight” with the leftovers.

View video of the entire meal