Moringa: The next superfood?

The “Miracle Tree” that could help feed the world

THERE'S NOTHING SUPER-LOOKING ABOUT MORINGA. It’s skinny and sparse in foliage. Its fragile branches sprout puny white flowers and droop with long twisted pods knobby with seeds. But if plants were superheroes, then moringa would be Iron Man.

“If there were a top 10 list of plants that are going to help feed the world over the next hundred years, I would say moringa should be on that list,” said Carrie Waterman, a University of California, Davis, natural products chemist.

Every part of the plant is edible - leaves, pods, seeds, flowers, even its root. The feathery leaves alone pack a powerful protein punch – nearly 30 percent by dry weight. Legumes don’t even have that much protein, nor all the essential amino acids.

The leaves are high in vitamins A and C, calcium, zinc, iron, magnesium and potassium. They contain phytochemicals and antioxidants that have been shown in some research studies to reduce chronic inflammation. The plant even has the potential to simultaneously treat both malnutrition and obesity.

“My first impression was that it’s too good to be true,” said Waterman, who has researched the benefits of moringa for nearly a decade. Waterman’s research on the plant led to her being a co-inventor on a patent issued to Rutgers University in New Jersey for a process to extract bioactive compounds from moringa seeds. The patent is currently licensed to Estee Lauder.

More studies are needed to assess how the plant works in the body and how its nutrients and phytochemicals affect the body, she said, but the “miracle tree,” as it is sometimes described, shows great potential as a solution for a healthful, sustainable food supply for a rapidly growing global population.

What Makes a Superfood so Super?

Where did the term superfood originate from, anyway? Maybe unsurprisingly, the term had little to do with any formal scientific or nutritional study.

The moringa tree, also known as the drumstick tree because of its slender foot-long pods, has been consumed mainly in parts of Southeast Asia for centuries.

The plant is distantly related to cruciferous vegetables like broccoli, kale and cabbage, and shares the same nutritious compounds. Its leaves, when tossed on salads or on meat, taste a bit peppery like arugula. Young pods are reminiscent of Chinese long beans, with a hint of spice. Seeds can be eaten or boiled to make salad oil. The fragrant flowers are often used to make tea.

More commonly, the leaves are dried and ground into a powder that’s added to soups, curries and stews.

“If it’s dried, it’s much more concentrated,” said Waterman. “You get a lot more of the nutrients but can certainly lose some of the heat sensitive nutrients, like Vitamin C, in the drying process.”

Waterman was introduced to moringa while in the Peace Corps in The Gambia, West Africa. Gambians use the leaves as a protein and iron supplement for mothers and infants. People with diabetes may chew the bitter-tasting seeds to control blood sugar levels.

Worldwide, the list of moringa’s medicinal uses is long. People have used it for everything from typhoid to toothaches.

UC Davis researchers are working to distinguish the science from the hype.

Waterman has studied moringa’s anti-inflammatory benefits. Her research has found that mice fed a high-fat diet along with concentrated moringa lost weight, improved glucose tolerance and failed to develop fatty liver disease compared with those not fed moringa.

“Moringa has a high level of antioxidants and very specific molecules that help reduce inflammation, which we know is underlying a lot of the chronic health conditions including cancer, obesity, diabetes and malnutrition,” Waterman said.

Peter Havel, a professor of nutrition and molecular biosciences at the UC Davis School of Veterinary Medicine, has tested moringa in the UC Davis Type 2 diabetes rat model he developed that closely mimics diabetes in humans. Those studies found moringa delayed diabetes in rats approximately five months, which could mean a delay of 10 to 15 years for humans.

“Delaying diabetes is huge,” Havel said. “If diabetes is delayed by 15 years and you get it at age 60 instead of 45, you may not need a kidney transplant.”  Delayed diabetes could also forestall a heart attack or an amputation.

“Delaying diabetes is huge,” Havel said. “If diabetes is delayed by 15 years and you get it at age 60 instead of 45, you may not need a kidney transplant.” 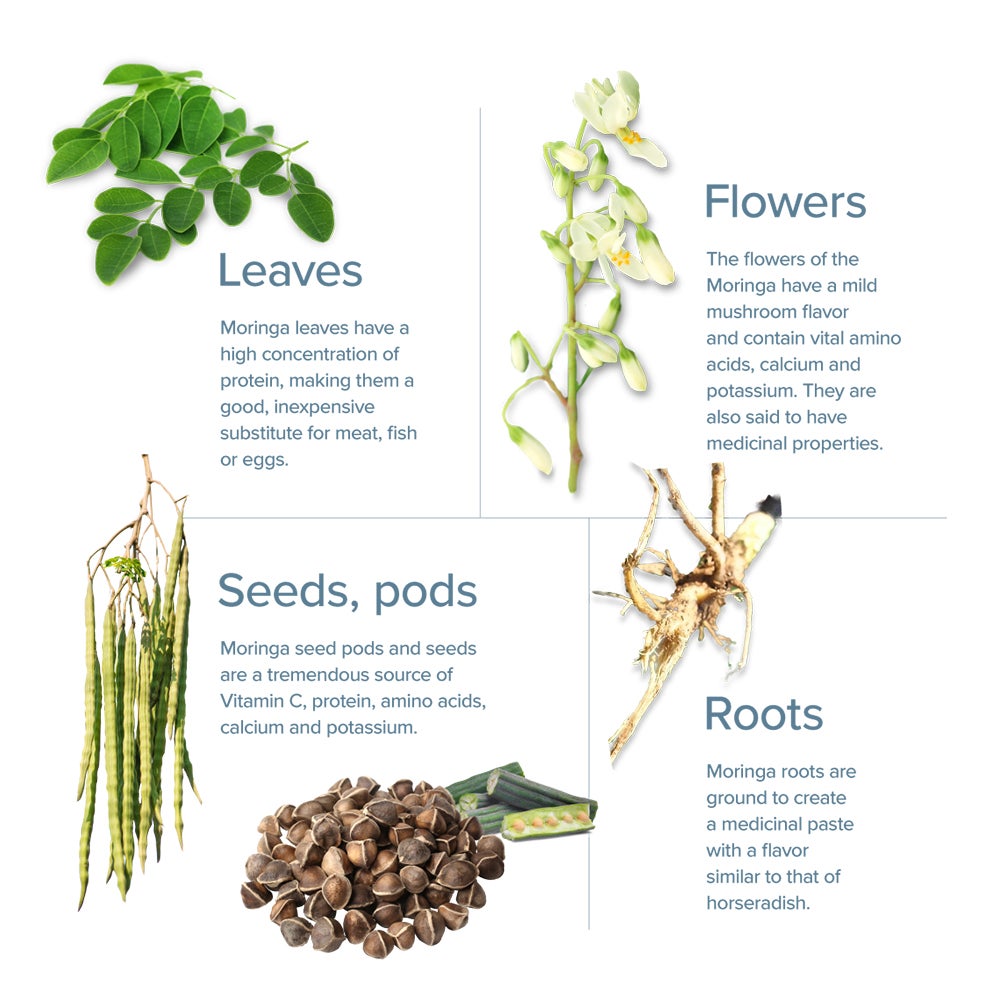 So how is it that one plant can help both the obese and the malnourished? Waterman said it may be that the plant provides the amino acids and proteins to help build strong muscle and bones, while some of the phytochemicals better metabolize sugar so it’s not getting stored as fat.

A few clinical studies in India have shown moringa can reduce blood sugar and cholesterol levels, but Waterman said more trials are needed.

In addition to its healthful elements, Waterman sees moringa as a strategic crop in the face of global warming and rapid population growth. The world’s population is predicted to grow from 7.6 billion to about 10 billion by 2050.

It’s native to India, but moringa can grow anywhere temperatures don’t dip below freezing. It’s even drought tolerant and can grow in sandy soils. It also grows fast and can produce flowers year-round.

“We need to find the best foods that can be grown locally that are accessible and appealing to populations,” said Waterman, who is currently in Kenya helping moringa farmers increase yields. “Moringa can help us address food security.”

It may seem like a lot to ask of a little tree. But UC Davis researchers are taking the idea a step further by sequencing moringa’s genome.

“Like any other crop we need to have improved varieties that are nutritious, can resist disease and increase yield,” said Allen Van Deynze, director of research at the UC Davis Seed Biotechnology Center.

Plant breeders consider moringa an “orphan crop” with limited appeal and markets, like fava beans or yams. Unlike globally traded cash crops such as corn and wheat, moringa has been neglected by crop breeding programs.

But Van Deynze is adopting these orphans. He is the scientific director of the African Orphan Crops Consortium, which has as its task to sequence the genomes of 101 orphan crops, moringa among them. Van Deynze said all African crop selections are already nutritious. They’re just not productive enough.

“We’re providing genomic tools, so we can breed plants that may have more yield or that can be harvested more quickly,” he said. “We want to provide nutrition for tens of families, not one from a single farm.”

On the outskirts of Fresno, California, an increasing number of Hmong American farmers are growing a large variety of tropical crops in this temperate climate.

Among the knee-high lemongrass, taro root and Kabocha squash, Zia Thea Xiong has rows of moringa trees on his 40-acre farm. Originally from Laos, Xiong says through an interpreter that he sells the fresh leaves and drumstick seeds easily at local farmers’ markets.

“Moringa compared to other crops does very well in the Central Valley because of its drought tolerance,” said Ruth Dahlquist-Willard, a small farms and specialty crops advisor with the University of California Cooperative Extension in Fresno County.

Dahlquist-Willard is working with Xiong and other farmers to find an efficient way to dry and grind the moringa leaves into a powder. That would allow the farmers to sell year-round and tap into the growing health food market for moringa in the U.S.

“We’re not trying to compete with the international market, we’re trying to promote a higher quality locally grown produce,” Dahlquist-Willard said. “It’s the farm-to-fork idea where local farmers could market their own products.” She hopes moringa will help sustain more small family farms like this one.

Xiong has now been selling fresh moringa for four years and is trying to expand to meet demand. He raves about the benefits of moringa. While he eats it himself, he also has been feeding his small herd of goats a bunch of moringa leaves every few days for the past several months.

Xiong said the goats didn’t look good before. Their hair was unclean, and they seemed sick.

But now, he beams with pride as he shows them off.

Researchers at the University of California, Davis, have taken a major step that could lead to the development of new disease-resistant varieties adaptable to climate change.

Closing the Loop on Sustainable Agriculture

Tsar Nicoulai is the first caviar farm in the world to produce food in an aquaponics system, which is a complete ecosystem that includes growing fish, plants and bacteria.