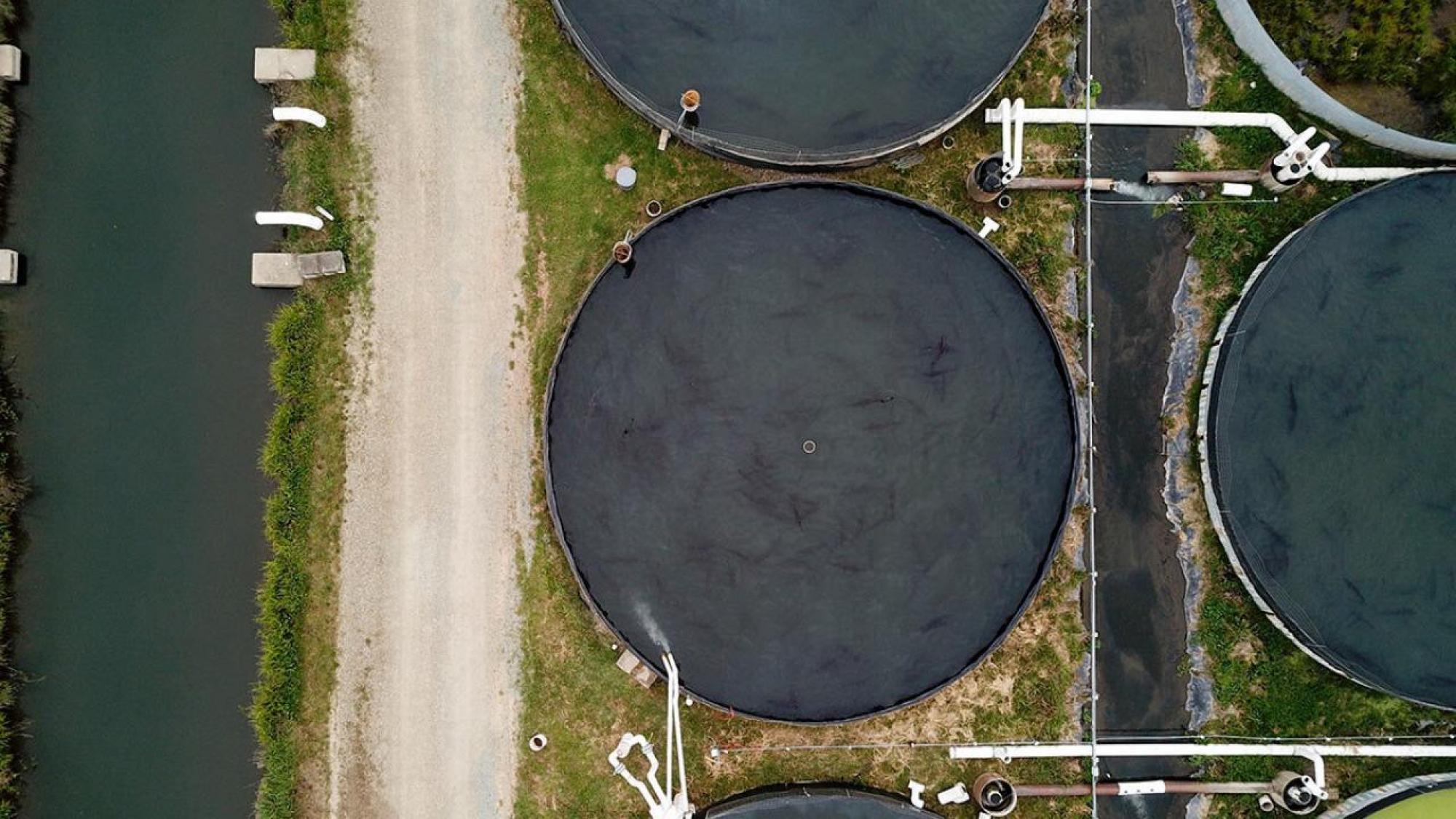 Closing the loop on sustainable aquaculture

Closing the loop on sustainable aquaculture

WILTON, CALIF. – ON A FARM JUST OUTSIDE OF SACRAMENTO, hundreds of prehistoric-looking fish swim around in 50-foot diameter tanks. These are white sturgeon, the largest freshwater fish in North America. They’ve been around since dinosaurs, can grow more than 7 feet long and lay hundreds of thousands of eggs at a time. The roe of these sturgeon are harvested for a boutique food producer regally named Tsar Nicoulai Caviar.

While a Sacramento Valley farm may seem an unlikely location for such delicacies, the white sturgeon’s native habitat is just a few miles away in the Sacramento River. When wild beluga sturgeon populations in the Caspian Sea began to plummet in the 1980s from overfishing, University of California, Davis, aquaculture experts went to work to breed the species in captivity in the state.

For Tsar Nicoulai, the result of that effort has been award-winning sustainable caviar and smoked white sturgeon meat. UC Davis is also helping the company take its next eco-friendly step. Tsar Nicoulai is the first caviar farm in the world to produce food in an aquaponics system, which is a complete ecosystem that includes growing fish, plants and bacteria.

“One of our best caviars is the closest thing to a sustainable beluga sturgeon, that unctuous freshly salted farm butter flavor, the foie gras of the sea,” said Ali Bolourchi, the vice president of farm operations for Tsar Nicoulai Caviar and UC Davis Graduate School of Management alumnus.

Bolourchi often speaks like a chef, since he spends much of his day promoting the virtues of his caviar to some of the nation’s finest restaurants and retailers.

Caviar is a quality-based item, said Bolourchi, not a commodity. “It’s never been about how many tons we can produce. For us, it’s about how you can do a better job for the fish, for the land and ultimately produce outstanding caviar,” he said.

From caviar to butter lettuce: An eco-friendly solution

For all its eco-attentiveness, this farm, and other aquaculture, comes with an environmental downside: fish waste. Until recently, wastewater from the fish tanks on the Tsar Nicoulai farm emptied into a giant man-made pond. The farm was growing and using water hyacinths, a flowering invasive plant, to help remove nitrogen and other elements from the water.

“It’s unfortunate we call it a waste stream because it’s really a nutrient stream,” said Jackson Gross, an aquaculture specialist with UC Davis in the Department of Animal Science. Gross advises the farm on everything from fish reproduction to wastewater management.

Tsar Nicoulai is now using the “nutrient stream” to grow something they can sell: vegetables. They built a 24,000 square-foot greenhouse. Inside, thousands of heads of organic butter lettuce float on foam rafts, their roots dangling through holes into the water. The fish waste in the water helps the plants grow.

Here’s how the aquaponics system works: The sturgeon excrete ammonia through their gills and urea into the tank water. Bacteria break that down into nitrate, a plant fertilizer. The nutrient-rich water is then piped to the greenhouse and is filtered and taken up by the lettuce. The water returns back to the fish tanks much cleaner. It’s a closed loop system.

This aquaponics system allows Tsar Nicoulai to recycle close to 80 percent of all the water they use—a crucial savings in a drought-prone state like California.

“It's unfortunate we call it a waste stream because it's really a nutrient stream.”

“The butter lettuce that we have here is working for us. They’re removing the nutrients and cleaning the water so that we can have more recycling power,” said Mark Bolourchi, president of Tsar Nicoulai. “And I love lettuce.”

Aquaponics allows food to be grown year-round and at high densities. It can be grown in urban areas, on rooftops, and on islands where fresh produce may not be available.

While aquaponics systems have been around for a long time, many in the U.S. are small-scale, set up by hobbyists in their backyard. The larger commercial aquaponics farms typically don’t have sustainable seafood as a goal; the fish are nothing more than fertilizer for the vegetables, Gross said.

Growing food made cleaner water, and also generated a new source of income. The greenhouse is currently in a test phase, but Tsar Nicoulai hopes to begin selling lettuce to local restaurants and nationwide retailers under the Bare Roots Produce label this summer.

Aquaponics systems on this scale aren’t cheap. They can be energy intensive. Pumps are used to move and aerate water. Heaters and chillers may be needed to keep the right water temperatures for fish, plants and bacteria to thrive. It can be a complex balancing act and an expensive undertaking.

But Tsar Nicoulai seems content to take on those challenges. Next year, the company intends to install solar panels that will help supply the farm with renewable energy. “The goal really is to be more sustainable,” Ali Bolourchi said. “We hope that our success drives other fish farms to use resources that were formerly wasted.”

Smart Farm: Creating the Farm and Farmworkers of the Future

Smart Farms are addressing challenges in agriculture, using technology to increase production of food and renewable energy in the face of climate change.

Researchers at the University of California, Davis, have taken a major step that could lead to the development of new disease-resistant varieties adaptable to climate change.