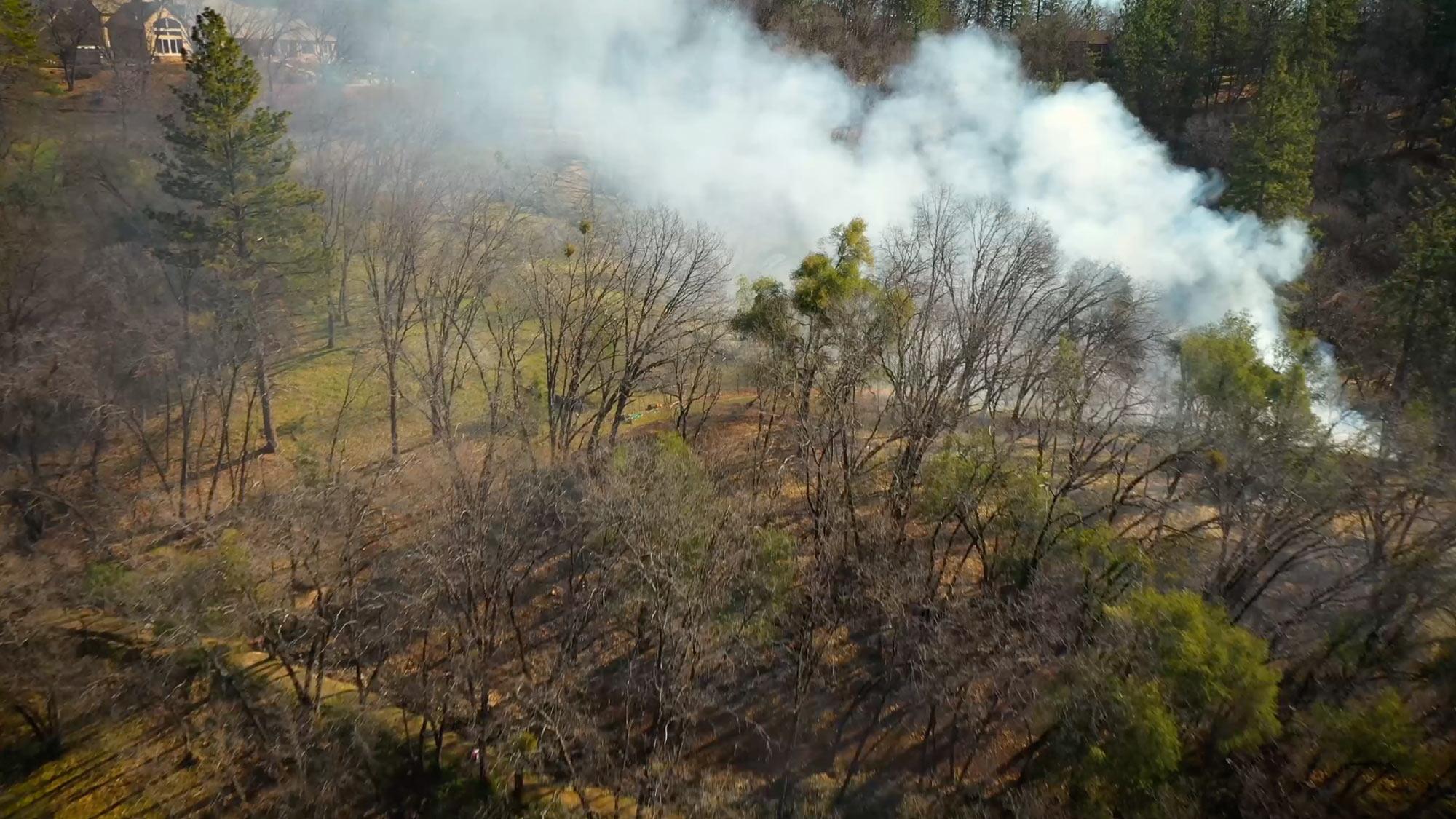 This is Odell’s property in Placer County, where five of his 11 acres are being burned by prescribed fire with assistance from Placer County Resource Conservation District, UC Davis researchers and others.

He feels good knowing that this gentle fire will bring ecological benefits to his property, which was just 1 mile from the River Fire’s evacuation zone last summer. But he’s clear about his objective.

“My goal is very simple: Reduce fire threat,” he said. “I’m hoping this is a cost-effective way to manage the land. I can’t solve climate change, but I can make my property more resilient.”

Getting good fire on the ground

California’s wildfire problem is no secret. Getting “good fire” on the ground, such as through prescribed fires and cultural burning practices, is a key tool toward addressing it. But landowners need help learning how to safely conduct burns on their properties, while also securing the necessary permits for burns to take place.

“The burn at Odell’s is an example of the kind of project the state hopes to expand, and which ecologists think is an important aspect of adapting to climate change in California,” said Andrew Latimer, a professor in the UC Davis plant sciences department.

Odell ’78, a graduate of UC Davis’ College of Engineering, has grazed sheep and goats, limbed up trees, and tried other fire-protection strategies, but he struggled to manage the property’s fire risk.

He connected with UC Davis fire ecologist Hugh Safford after hearing him speak at a UC Davis virtual series about wildfire. When Safford visited his property, he advised Odell to treat it with prescribed fire and connected him with the Placer County RCD and its Cal Fire-funded project, Prescribed Burning on Private Lands.

Our goal is to empower half a million landowners to burn 1 acre." - Cordi Craig, Placer Country Resource Conservation District

“How do we actually put fire on the ground on half a million acres in California?” said Placer County RCD project coordinator Cordi Craig, referring to the state’s shared stewardship agreement with the U.S. Forest Service. “Our goal is to empower half a million landowners to burn 1 acre. We’re trying to give private landowners the knowledge, skills and confidence to put fire on the ground and use good fire as a forest stewardship tool.”

It’s a springlike day in February when Odell’s burn takes place. Miner’s lettuce and wild hyacinth are already emerging from the ground, a reminder of the region’s rising temperatures.

Just before Odell lights the first flame, a neighboring family walks over the hill. They include grandparents and a mother holding her baby. Some neighbors had their own property treated with prescribed fire the previous week, and they’ve come to observe and learn from those here, who include Craig, retired Cal Fire battalion chief Chris Paulus and several fire scientists from Safford’s lab in the UC Davis environmental science and policy department.

“We have to reestablish our burn culture, that knowledge, and work as neighbors to do a lot of good,” Paulus tells the group, noting that Indigenous people routinely burned this land for acorn production and other benefits before European settlers arrived.

UC Davis is monitoring the results of this and several other prescribed burns across the state — ranging from Yosemite to Klamath national forests and throughout the Sierra Nevada — as part of the California Prescribed Fire Monitoring Program, in partnership with Cal Fire and the California Air Resources Board.

“Landowners are small, but they add up, and together they form an important base,” said John Williams, a UC Davis project scientist who leads the monitoring program. “Our mandate is to see what effects prescribed burns have and to use the data we collect to help land managers and owners achieve their ecological restoration and fuels reduction goals.”

Now in its third year, the program monitors nearly 600 plots across more than 25 sites in California. Once a site is identified for burning, scientists and field crews conduct vegetation surveys, and measure things like forest structure, downed woody debris and leaf litter. They record fire behavior during the burn and then return twice — in the immediate weeks after the fire and a year later — to collect post-fire data and learn how well the prescribed burn objectives were met.

The data they collect will become part of a database that forest agencies and even landowners like Odell could use to have a better idea of how a prescribed burn might behave at a property. Such a database could also help foresters prioritize areas for treatment, restoration, reseeding and other efforts.

Williams said people sometimes think prescribed burns are a silver bullet for managing wildfire. But he said the task ahead is enormous.

“To my knowledge, the most we as a state have burned in a year is around 120,000 acres,” he said. “There are roughly 30 million acres that are one or more fire cycles behind because of suppression. So there’s a lot of catching up to do.”

That said, he sees cause for optimism for several reasons:

“You can’t identify a prescribed burner by their political party,” he said. “These associations are bringing neighbors and communities together.”

For Odell, he’s hopeful not to need as much assistance the next time he needs to treat his land with fire.

“Am I comfortable? Not yet,” he said. “But we do this to get a sense of it. Part of it is just being around it and seeing it.” 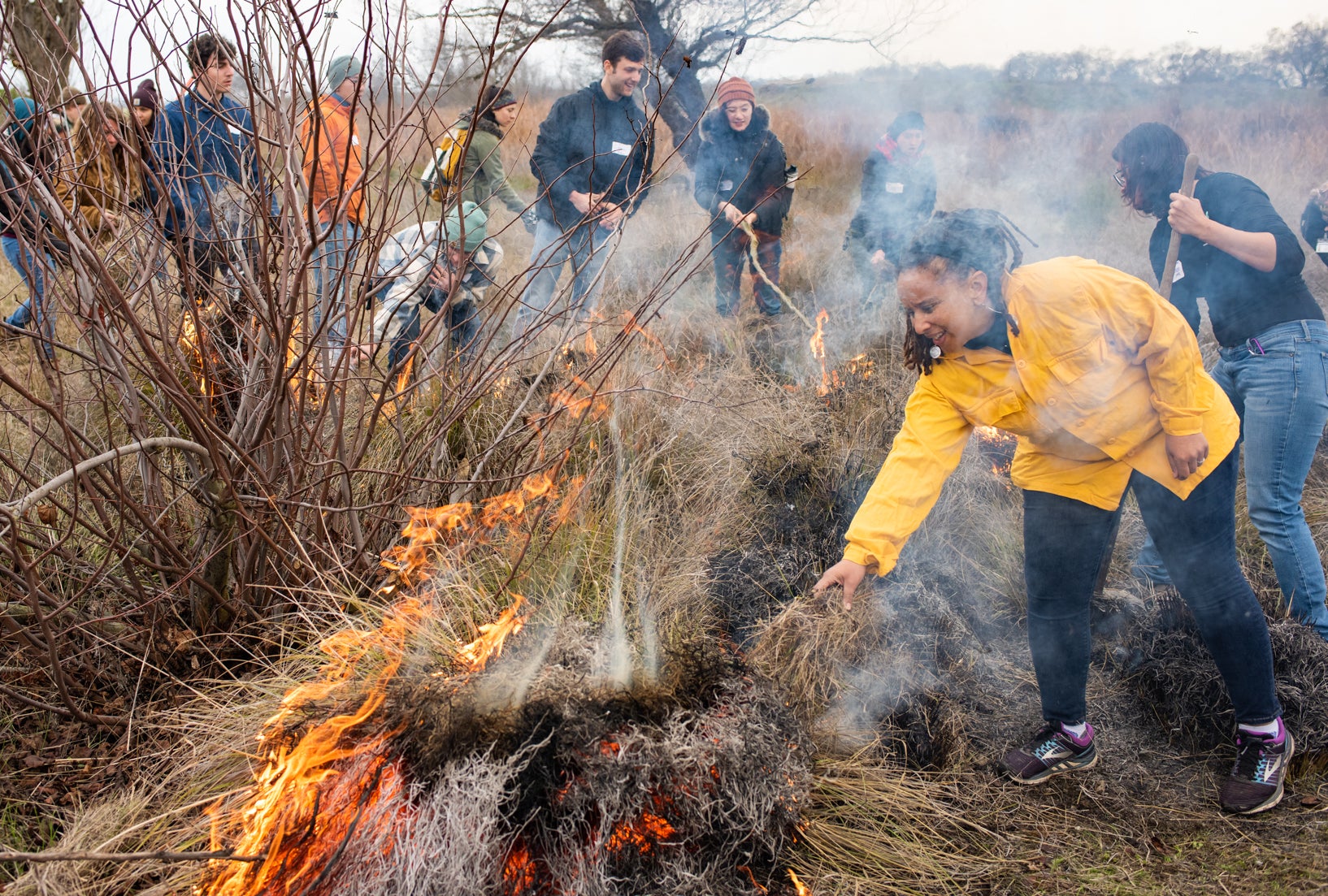 Rethinking Wildfire: Cultural Burning and the Art of Not Fighting Fire

For non-Native people, cultural burns require a mental adjustment — one that views fire as restorative, not destructive. This is fire lighting, not firefighting. 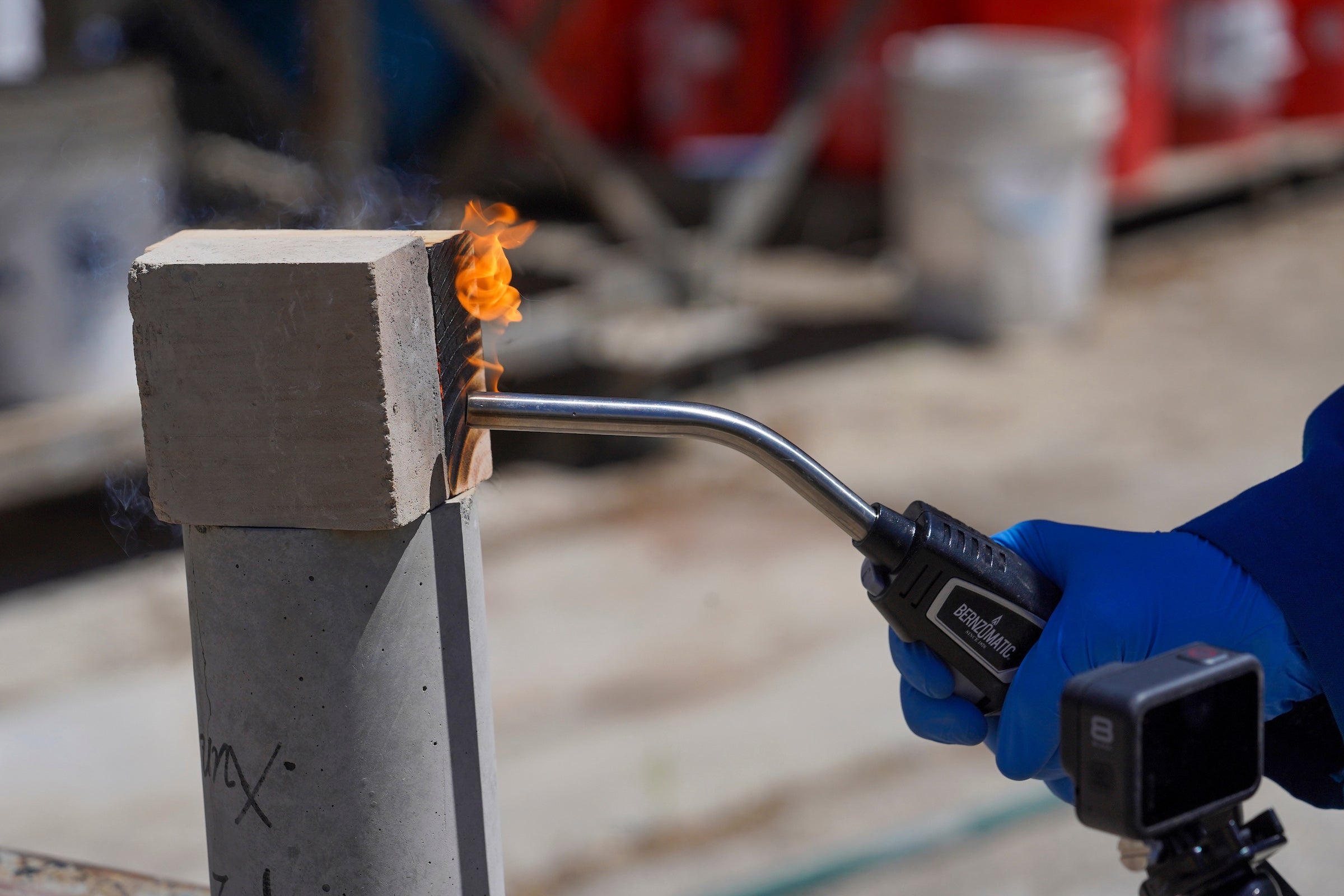 A UC Davis engineering professor is trying to find ways to build affordable homes that can withstand most of what the planet throws their way. One technique turns mud into wildfire resistant housing. 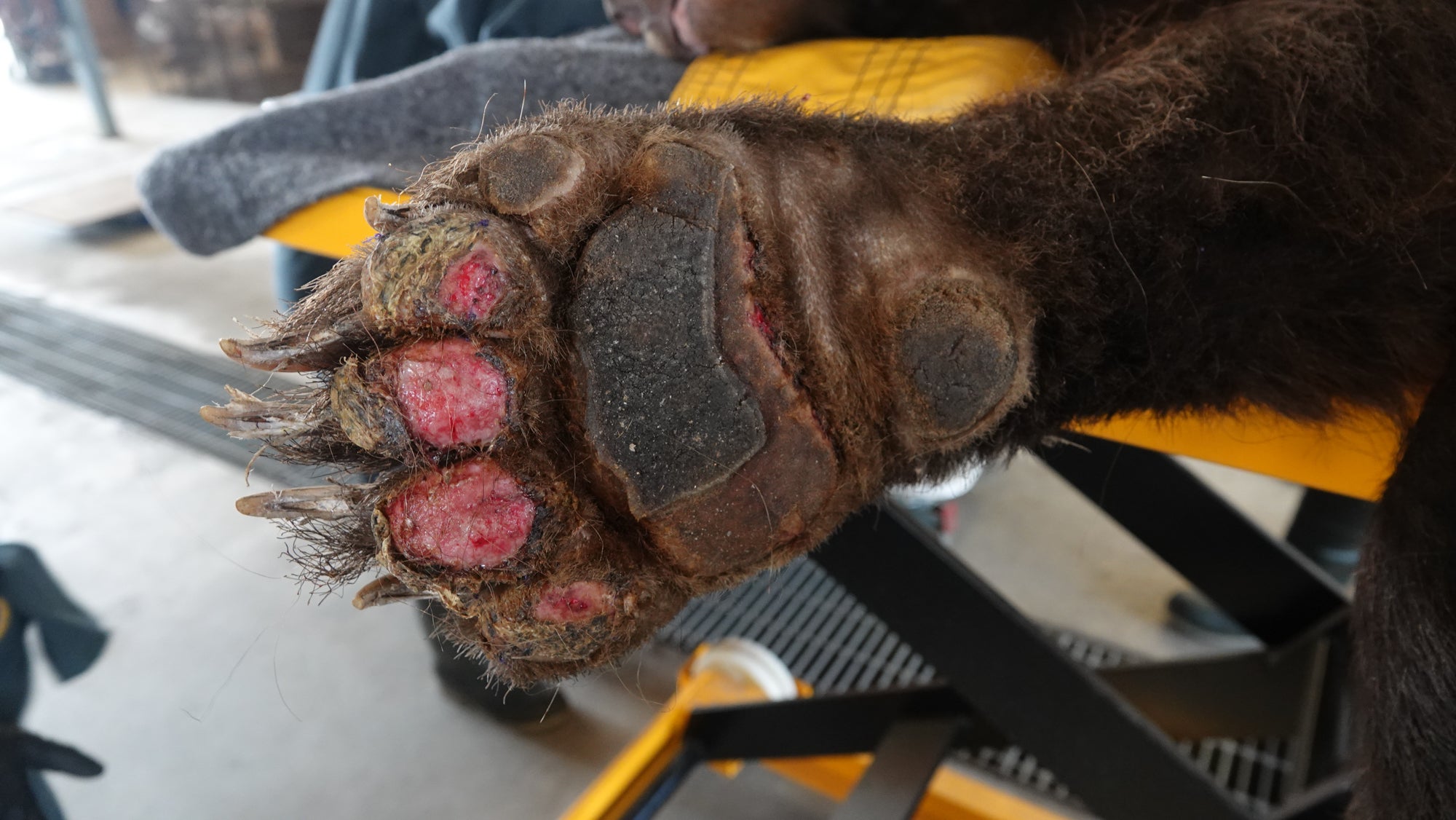 Modeled on the OWCN, this partnership between UC Davis and the California Department of Fish and Wildlife steps in to help burned and injured animals. 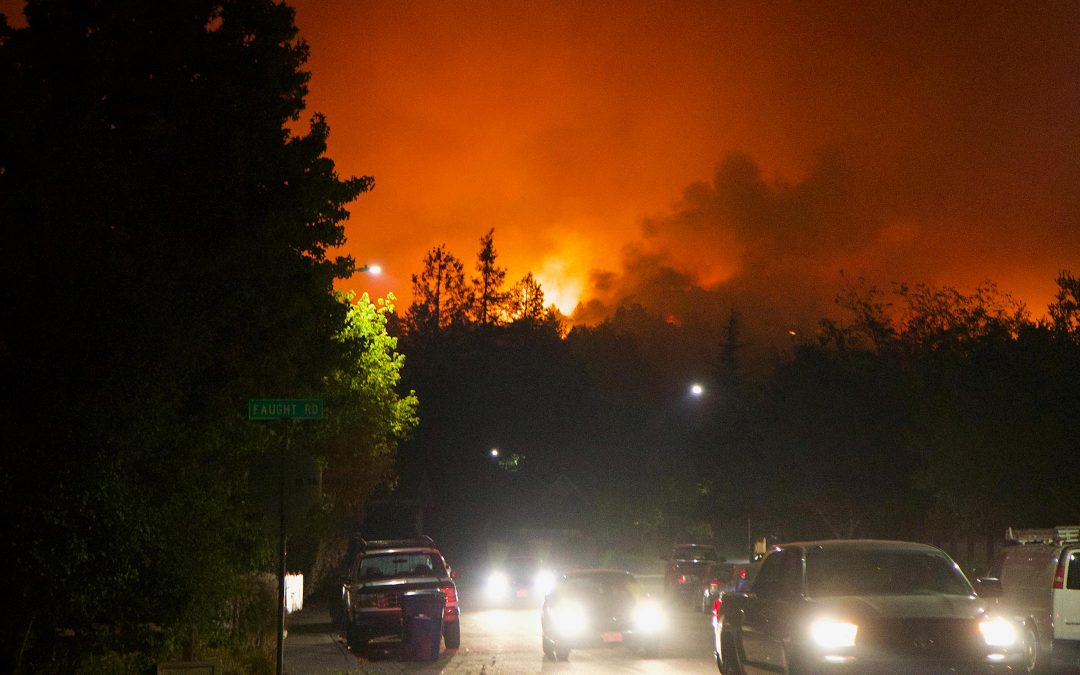 From the health impacts of wildfire smoke to wildfire’s effects on forests, UC Davis experts can talk with reporters about a variety of fire-related topics.