Ellen Hartigan-O’Connor and Lisa Materson of the University of California, Davis, collaborators in research and teaching of women’s and gender history for 10 years, were keenly aware of many fascinating stories about women in history, as uncovered by female historians.

But getting those stories into the big narratives of history was more than one or two people could accomplish.

Then Oxford University Press asked the UC Davis scholars, both associate professors of history in the College of Letters and Science, to create a women’s history handbook.

The Oxford Handbook of American Women's and Gender History 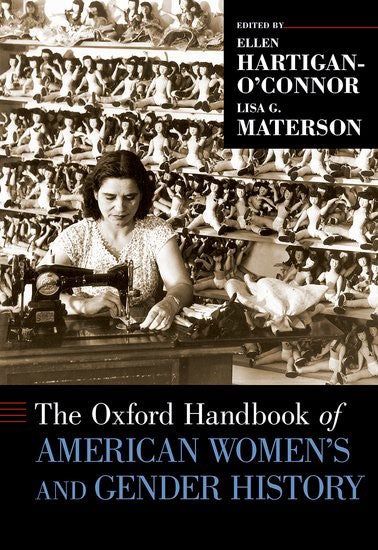 Oxford publishes definitive handbooks on hundreds of academic subjects, but none had been done on women in American history. So Hartigan-O’Connor and Materson took on the project, determined to showcase not only women’s and gender history, but also the scholars whose intellectual innovation continues to bring women’s stories to life.

In a process that included a conference at UC Davis, Hartigan-O’Connor and Materson discussed, sought, collected and edited dozens of historians’ essays on topics ranging from slavery to politics.

The resulting book came out in October: The Oxford Handbook of American Women’s and Gender History.

The essays illustrate the history of an entire continent through women and their ideas about gender: migration, colonialism, warfare, free and unfree labor, incarceration, sexuality, race and music, and women in the work force, in politics and in motherhood. As the first sentence of the book’s introduction proclaims: “Half of the people who have lived in North America and the United States have been women.”

Materson and Hartigan-O’Connor introduce the volume of 29 essays by explaining that female historians in previous generations “trained themselves and each other within university departments that were teaching history as defined and dominated by men … and as a result pioneered alternative methodologies and perspectives.

“This book continues their innovations, by presenting new chronologies, transnational themes, and the integration of histories about diverse women’s lives with the history of ideas about gender and their consequences.”

From the time of their conference four years ago, Materson and Hartigan-O’Connor knew the handbook would be relevant in today’s society. But they had no idea how timely its publication in the fall of 2018 would be — amid the #MeToo anti-sexual assault movement and during the run-up to the midterm elections in which women made historic gains.

Materson and Hartigan-O’Connor read an excerpt about this singing group of the 1950s, ’60s and ’70s, an example of how the book looks at how women in various walks of life have been interpreted.

“The handbook appears at a time when Americans are interested in understanding more about women and gender,” Materson said in a recent interview. “There is an urgency; it’s so important for people to learn U.S. women’s and gender history. There is direct relevance to our contemporary world.”

The editors, seizing on the timing of publication, wrote an article for the History News Network after confirmation hearings on the nomination of Brett Kavanaugh to be an associate justice of the U.S. Supreme Court. In “What Historians Could Teach Senators on the Judiciary Committee,” Materson and Hartigan-O’Connor make the point that women’s history is often written from archives that have critical gaps.

“The archive is shaped by those who preserve it: Notes can be filed or shredded. Calendars can be preserved or tossed. And whispered confidences can go unrecorded,” they wrote.

“Multiple institutions control who gets to interpret.”

With their new work, Materson and Hartigan-O’Connor have even more well-researched articles to cite and assign in “Women and Gender in America,” a two-quarter course on the period before 1865 and from 1865 to present.

UC authors throughout the book

Nine, or nearly a third of the essays, are penned by UC authors, including Lorena Oropeza, a UC Davis history professor. Said Hartigan-O’Connor: “This just shows the long-standing important role UC plays in training and hiring scholars of women’s and gender history.”

Judy Tzu-Chun Wu, professor and chair of Asian American studies at UC Irvine, said she was honored that the authors asked her to write an essay on some dimensions of the history of feminism. “The essay allowed me to explore the political, economic and sexual dimensions of U.S. feminisms, exploring the significance as well as limitations of these movements and ideas by foregrounding the agency and experiences of women commonly considered marginal to the U.S. nation-state,” she said.

Sharon Block, a professor of history at UC Irvine, said the editors approached her with the idea of writing a history of sexual violence across all of American history. “This gave me a wonderful opportunity to link my interests in combating modern day sexual harassment to my historical knowledge. Especially in this MeToo era, it’s crucial for us to understand the ways that sexual violence and coercion grow out of intersecting racial, colonial and gendered power inequities across time and place.”

In this excerpt, Materson and Hartigan-O’Connor describe how women's history finally became a part of academia.