Reframing How We Think About Treason 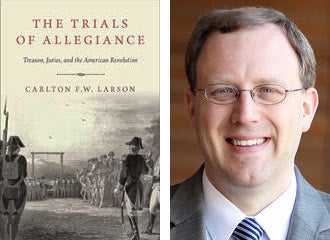 Carlton F.W. Larson, professor of law, will give a noontime presentation, Wednesday, Feb. 19, on his legal history, The Trials of Allegiance: Treason, Juries and the American Revolution (2019), which, according to the publisher, “reframes how we think about treason in American history, up to and including the present.”

Larson did extensive research into trials held in Pennsylvania during the revolution, profiling jurors and discovering that “although treason was formally a capital crime, people were very uneasy about actually using this,” Larson said in a video interview produced by the School of Law.

The book’s description states: “Although popular rhetoric against traitors was pervasive in Pennsylvania, jurors consistently viewed treason defendants not as incorrigibly evil, but as fellow Americans who had made a political mistake. ... Jurors refused to accept the death penalty as an appropriate punishment for treason. The American Revolution, unlike many others, would not be enforced with the gallows.”

All of which led to a narrow definition of treason in the Constitution — “and why most of the political disputes we see now don’t fit that,” Larson said in the video interview.

The book concludes with the adoption of the clause in the Constitution that states: “Treason against the United States, shall consist only in levying war against them, or in adhering to their enemies, giving them aid and comfort.”

Larson will move beyond the American Revolution in his next book, On Treason? A Citizen’s Guide to the Law, due out this fall, examining the law in the context of various cases and trials, with chapters on Benedict Arnold, Aaron Burr, Jefferson Davis, Tokyo Rose and U.S.-born al-Qaida propagandist Adam Gadahn; cases arising from the Fugitive Slave Act and the Mexican American War; and extending all the way to accusations of treason traded between President Donald Trump and his critics.

Larson’s presentation on The Trials of Allegiance is scheduled from 12:15 to 1:15 p.m. in the Kalmanovitz Appellate Courtroom (1001 King Hall). Lunch will be provided. Please RSVP here.

From Youth Exclusion to Inclusion in Public Spaces