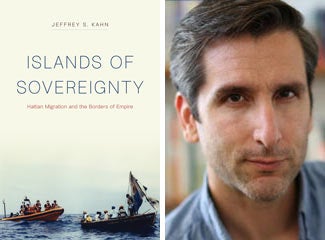 “No one concerned about the frightening history of the country’s relationship to others at another troubling moment — and no one who cares about the discretionary sovereignty of the modern state and its borders — can afford to look away from the story Kahn tells in this major intervention.” — Samuel Moyn, Yale Law School, author of “Not Enough: Human Rights in an Unequal World”

Jeffrey Kahn’s book about Haitian boat migration to the United States is the winner of a 2020 Herbert Jacob Book Prize from the Law and Society Association.

Islands of Sovereignty examines how Haitian asylum seekers during the last three decades of the 20th century led to the development of new forms of legal activism, border governance and oceanic policing that have remade the spatiality of the American nation-state.

A sociocultural anthropologist and a legal scholar, Kahn combined ethnography with archival research in writing Islands of Sovereignty.

Kathleen Holder is a content strategist and writer in the College of Letters and Science.