In 2012, veterinary medicine professor Danika Bannasch had no idea what a football kickoff tee looked like, but she was pretty sure her dog Pint could retrieve it. After all, the Nova Scotia duck tolling retriever was already training to compete in hunting trials.

What she didn’t count on was the crowd noise, the referee whistle that sounds suspiciously like her “angry sit” training whistle, and a ball that even looks a bit like a duck.

But Pint did great, and a one-game commitment turned into 279 kickoffs (and counting) from three different “generations” of kickers over the course of 42 games — a longer career than any players or coaches currently associated with the team.

In that time, he’s served as a reminder of the connection between athletics and UC Davis’ renowned veterinary medicine program, all while his name pays homage to the university’s expertise in (and the Bannasch family’s fondness for) beer and brewing.

His retrievals are a little slower now, and repeatedly biting down on the tee has sheared off all four of his canine teeth, so the 2021 season will be his last delighting fans in Davis and around the world. Bannasch, who holds the Maxine Adler Endowed Chair in Genetics for the School of Veterinary Medicine, said Pint would probably keep running out to pick up the kickoff tee as long as he still has the strength, but she worries he might hurt himself if he continued.

“Maybe he’s not ready to retire, but I think he should,” she said. “He hurls himself into things. I need to make the decision for him.”

He’ll be honored this Saturday (Nov. 13) when UC Davis takes on Eastern Washington in the annual Salute to Heroes (servicemembers and first responders) at UC Davis Health Stadium. Pint will have canine company when a Doxie Derby is held at halftime and will see his visage in a bobblehead giveaway (limited supply).

It’s the first time Pint memorabilia has been available at games, but the dog’s likeness has been a familiar one ever since his first game, when announcer Larry Swanson took to calling him “Pint the Wonder Dog.” 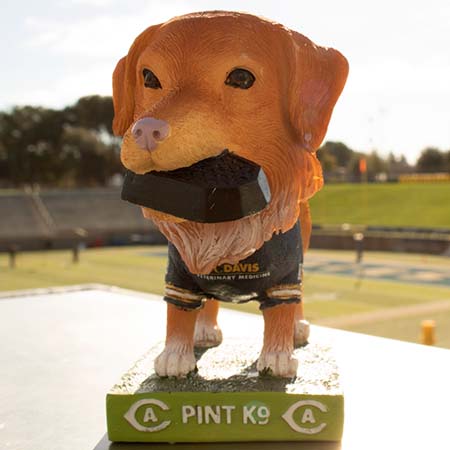 Even though that name hasn’t been used officially for years and Pint took all but one game off in 2019 while Bannasch was on sabbatical, a group of fans still enthusiastically greeted “Pint the Wonder Dog” before a recent game.

And when the pandemic forced the football team to play a short season in the spring of 2020, without fans, Pint’s face was among those that made up a rooting section of spectators on cardboard.

“It’s great how much he has really gotten to mean to the fans, especially the really die-hard fans,” she said.

Bannasch knew Pint was special the moment she locked eyes with him as a 5-week-old puppy.

Pint was born to dogs Bannasch owned (an expert in canine genetics, she breeds Nova Scotia duck tolling retrievers), and she had promised the pick of the litter to someone else. She, of course, had to rescind that offer and explain to her husband — Mike Bannasch, who works in the School of Veterinary Medicine Office of Professional Education — why they needed to keep little Pint.

Pint isn’t the only dog who participates in collegiate football, but he’s drawn nationwide attention and has even been featured on ESPN.

At the end of the day, he’s still a family pet. Danika Bannasch said it will be strange to not have Pint don his No. K9 football jersey for games, especially to their 15-year-old son, Cameron, who has grown up seeing a set of inflexible dates marked on the calendar every fall and then using his all-access pass to play on the sidelines.

Cameron, who has also put Pint through his paces in hunting competition, was playing with Pint one day this summer when he found a mass on his side. It turned out to be a mast cell tumor, and in July Pint became a patient at the vet hospital for more than just the routine care that he’d received there for years.

Hospital staff used a special guide to find the lymph node the tumor was draining to, and removed both it and the tumor, Danika Bannasch said. Just 10 days later, he was up and ready for a photo shoot with Congressman John Garamendi, Chancellor Gary S. May and School of Veterinary Medicine Interim Dean John Pascoe, but his surgery incision opened again and he had to return to the hospital.

One vacuum-assisted closure therapy and an antibiotic-resistant bacteria later, Pint was cleared to go back to work, which he did at a national dog show in September.

How did he do at the show? “It’s Pint,” Danika Bannasch said by way of explaining that, of course, he did amazing. After all, this dog holds a record off the grid-iron for being the youngest of his breed to ever earn the title of champion master hunter.

He has a storied bloodline, too: Pint’s grandmother — also owned by the Bannasch family — was once saved by the vet hospital after accidentally eating caffeine pills. And Pint is a breeding dog whose offspring have served as avalanche search-and-rescue dogs, police dogs and hunting competitors, living in Finland, Sweden, Canada and elsewhere. A Norwegian litter descended from Pint all bear football-related names, like Touchdown and Kickoff.

Pint is one of four dogs currently owned by their family, but Danika Bannasch said she won’t train another to retrieve kickoff tees.

“It’s something I did with Pint, and I wouldn’t want to do it with another dog,” she said, holding back tears. “It’s just the thing that we did.”

The tradition — and the connection with the School of Veterinary Medicine — is likely to continue in 2022 with a dog trained by Lisa Tell, a professor of medicine and epidemiology. She’s working now to adopt Cori, a 2-year-old black lab.

Tell said she’s excited for her dog to be the rookie taking the place of the veteran as he leaves the field.

“It really takes a special kind of dog to do what Pint did,” Tell said. “I think having that connection with the vet school and the athletics department is really awesome.”