Washington Monthly magazine today (Aug. 29) recognized UC Davis as a top-10 national university based on contributions to the “public good.” The magazine defines the “public good” as social mobility (recruiting and graduating low-income students), research (producing cutting-edge scholarship and Ph.D.s) and service (encouraging students to give something back to their country).

Acting Chancellor Ralph J. Hexter said the ranking is well-deserved. “Our work is all about improving people’s lives,” he said. “We couldn’t be more proud of our students, staff and faculty for their engagement and their commitment to make the world a better place.” 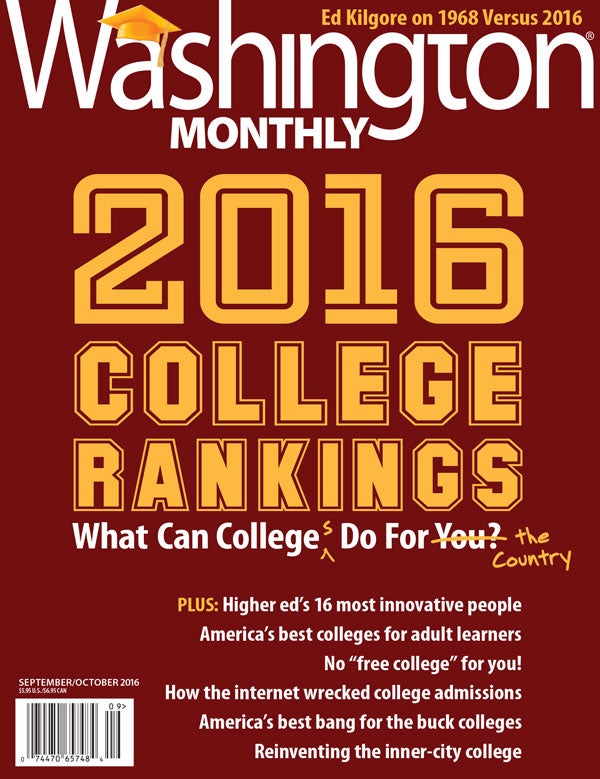 The rankings consider such factors as the percentage of low-income students receiving federal aid, and the percentage of students who join the Peace Corps or engage in other forms of community service. Here’s how UC Davis stacks up in these categories:

The rankings also consider each school’s student body diversity; percentage of students who are the first in their families to go to college; ROTC enrollment; graduation rates (actual and predicted); student earnings 10 years after initial enrollment; research expenditures; and the number of faculty receiving prestigious honors, including national academy membership.

Washington Monthly established its rankings 11 years ago. “America needed a different kind of college ranking,” guest editor Kevin Carey wrote in his introduction to this year’s College Guide issue. So, he said, the magazine devised a system that evaluates colleges not on “what they do for themselves” in terms of status and exclusivity, but on what they do for their country.

“Colleges that enrolled many low-income students and helped them graduate did well on our rankings, regardless of how famous they were. So did universities producing the next generation of scientists and Ph.D.s, and those that built an ethos of public obligation by sending graduates into service.”

UC Davis also earned a place on Campus Pride’s 2016 Top-30 List of LGBTQ-Friendly Colleges and Universities. The list, now in its eighth year, highlights schools for their LGBTQ-inclusive policies, programs and practices.

Each school’s Campus Pride Index is based on an evaluation of 10 “inclusion factors.” UC Davis’ report page shows 3.5 to 5 stars in every category, including the maximum in support and institutional commitment, academic life, student life, campus safety, and counseling and health.