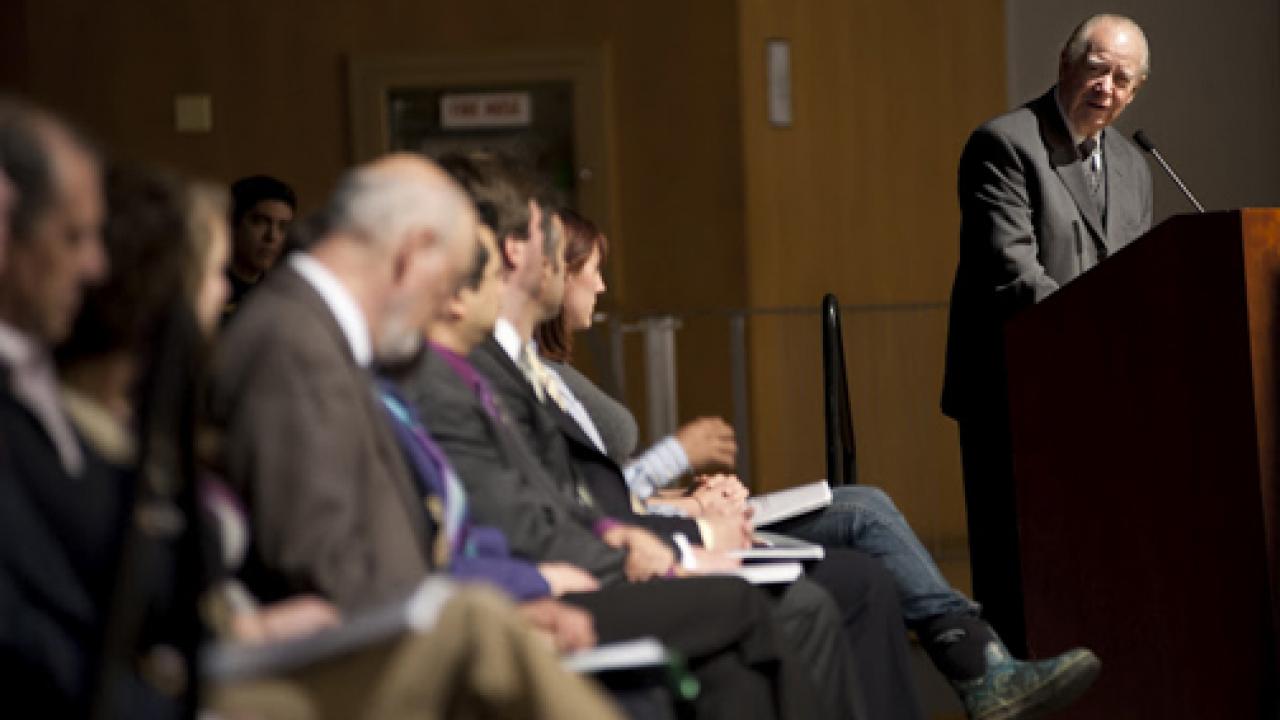 Use of pepper spray not justified, concludes Reynoso task force

The long-awaited Reynoso task force report released on April 11 criticized the UC Davis administration and police for the pepper spray incident of Nov. 18, while recommending a series of reforms to make the university a model for free speech.

The report declared at the outset that the pepper spray event “should and could have been prevented.”

Retired state Supreme Court Associate Justice Cruz Reynoso chaired the task force, which presented its findings to more than 400 members of the campus community at Freeborn Hall. Courtroom challenges had delayed the release of the document, originally planned for March 6.

A UC Davis law professor emeritus, Reynoso blamed state legislation — the police officers’ “bill of rights” — that resulted in litigation regarding the report’s release. He described that particular law as a “great disservice” to communities needing to learn the truth about police actions.

At one point, Reynoso waved a heavily redacted earlier version of the report to demonstrate how much information the police union had sought to keep out of the public spotlight.

As for the issue at hand, Reynoso said that while UC Davis officials had seemingly operated “in good faith,” they made “many serious mistakes.” From the administration’s “informal” decision-making style to the Police Department’s overall approach, the handling of the protesters was seriously flawed on several levels.

“When a crisis like this comes up on a campus,” Reynoso said, “it's important to know who’s in charge, what’s going to be done and how it’s going to get done.”

While concerned about student safety, administrators assumed on insufficient evidence that many off-campus troublemakers were part of the tent-city protest at UC Davis, according to the report. The report also states that voices of dissent from this view, like that of Assistant Vice Chancellor for Student Affairs Griselda Castro, were ignored within leadership circles.

The report suggests a number of reforms, including that UC Davis establish a clearly defined structure and set of operating rules for the crisis leadership team. Minutes of meetings should be recorded, and administrators should be trained in California Standardized Emergency Management procedures, especially in regard to public protest, the report advised.

Meanwhile, UC should provide policy guidance on what is acceptable protest behavior and what is not, according to the document.

The report strongly recommends a thorough review of the UC Davis Police Department — “from top to bottom” — as described by Dan Dooley, a panel member and the senior vice president for External Relations in the UC Office of the President.

Specifically, police should receive standardized training in contemporary crowd control, instruction in alternative force applications or “passive arrest” tactics, and enhanced emergency and incident command training. Also, police should become thoroughly familiar with campus protocols for the use of force.

'No reason for pepper spray'

Reynoso said police planning and execution were flawed. While police had a plan, they did not follow it, the report stated. Also, the plan did not address what would be done with students who were arrested, including how they would be transported from the protest scene, the report stated.

“There was no reason, we concluded, to use the pepper spray. There was no danger,” Reynoso said at the forum. Based on the evidence gathered by Kroll, the company hired to do the investigation for the task force, police were never threatened by the student crowd, he said.

The report noted that a college campus is a unique environment for law enforcement, and that police and the administration must adjust accordingly.

“A campus is different than other locales,” Reynoso said.

Rebecca Sterling, a panel member and undergraduate student, said she hoped the police review would “shape the culture” in that unit in healthy, productive ways.

Panel member and UC Davis law professor Alan Brownstein talked about the free speech issues involved and the need for clear campus guidelines on this subject.

“There are really serious questions about what the rules should be in our community and how the First Amendment should apply.”

Eric Rauchway, a history professor serving on the panel, expressed hope that the campus would develop a reasonable approach to civil disobedience. “We don’t have that now, and we should.”

Reynoso spoke of re-emphasizing the Principles of Community, UC Davis’ community values statement since 1990, and working toward building a campus culture that encourages free expression within reason.

Reynoso said Chancellor Linda P.B. Katehi had called him earlier in the day, thanking him for leading the task force. She also issued a letter to the campus community:

“I am gratified that the Reynoso report is available to all of us as we continue efforts to make UC Davis a model for tolerance, inclusivity and constructive, spirited dialogue. We all can learn from the difficult events of last November; this report will help us do that,” the chancellor wrote.

One audience speaker, Robert Ostertag, a technocultural studies professor, asked the panel why the police used the type of pepper spray they did. The report stated that the particular type, known as MK-9, was not authorized for UC Davis police. Lt. John Pike and Police Chief Annette Spicuzza did not grant interviews to the task force.

Reynoso made it clear that the task force was not designed to determine punishment. “It wasn’t our job to say fire so and so and everything will be better.” The campus is conducting internal affairs investigations on those issues, he noted.

Katheryn Kolesar, panel member and chair of the Graduate Student Association, said it was “unfortunate” that the task force was convened for such an issue, but expressed hope that its recommendations would one day “make UC Davis a better place for everyone.”

Two question-and-answer sessions with members of the Reynoso task force are scheduled next week:

The location for both sessions is the multipurpose room, second floor, Student Community Center, kitty-corner from Outdoor Adventures and the Silo.