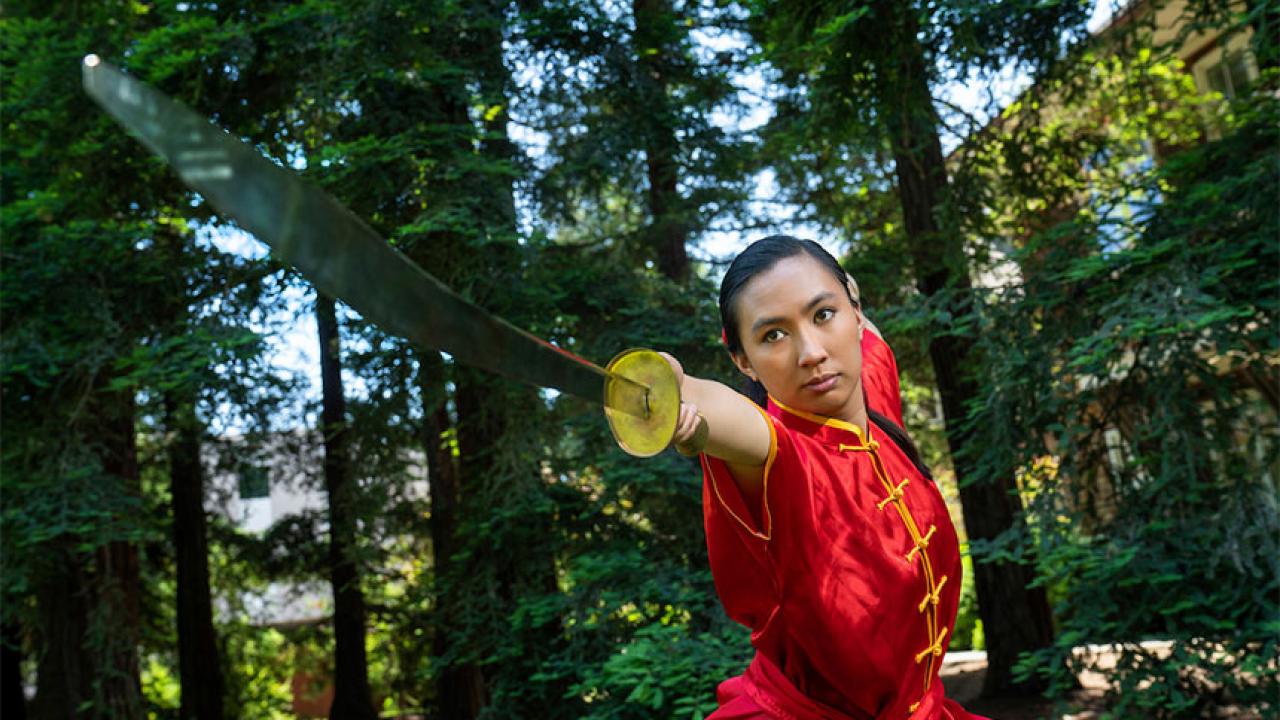 Medalist: ‘Reach Out for Support’

"Do not be ashamed to take care of yourself first. I feel like a lot of us come to university wanting to change the world and make a difference. We put immense pressure on ourselves. However, whether it be something material like food or something immaterial like love and support, you can only give to others what you have yourself. Reach out for support from others who care and seek out the resources available on campus. We can all do our part to combat the stigma on mental health issues by encouraging open and honest conversations about our own mental health." — Emily Eijansantos, 2018 University Medalist

Emily Eijansantos of Livermore, California, executes the movements of wushu martial arts with strength of spirit and showmanship — in such contrast to the anxiety and self-doubt she experienced during her early studies at the University of California, Davis.

Helped by the sport to recover her own emotional well-being and raise funds in support of mental health, she will be honored as the campus’s top graduating senior on Sunday, June 17.

Eijansantos, who has earned a Bachelor of Science in neurobiology, physiology and behavior, will be presented with the University Medal at the College of Biological Sciences commencement.

The award, which includes a $2,000 honorarium, is for excellence in undergraduate studies, outstanding community service and the promise of future scholarship and contributions to society.

“I was really moved,” Eijansantos said of her feelings when she learned she had won the prestigious award.

A stellar student in high school and at UC Davis, as a freshman she found herself struggling to present herself in interviews for internships. It started a downward spiral that crushed her self-esteem, kept her from making new friends, and almost robbed her of her dream of becoming a doctor.

When she did finally get a position in a campus lab, she said, “every mistake felt like an earthquake.” A lab partner’s kind words encouraged her to take the perspective that failure is a part of the scientific process and to persevere.

Eijansantos was motivated to return to the martial arts she had enjoyed as a youth. “I needed to do something that was not academic, something just for me,” she said.

Through the Davis Wushu student group, she found a family away from home. “That’s when I started to bounce back,” she said.

Eijansantos distinguished herself in the lab, where she researched ibuprofen’s effects on heart cells. She won two awards to support her research and already has had research papers published in academic journals. (Read more about her research experience.)

In the winter of her junior year, she started volunteering at UC Davis Hospice. “Listening to these patients and their wisdom has really put a lot of my own life into perspective and encouraged me to pursue my ambitions wholeheartedly,” Eijansantos said.

Later as a volunteer with the Connected Clinic at UC Davis for women with postpartum depression, she called mothers to encourage them to come to the clinic, observed support groups and transcribed a researcher’s notes.

‘It was for the patients’

When she learned Connected lacked a regular budget, she was inspired to organize a fundraising event through Davis Wushu, an undertaking that later threatened to overwhelm her.

“I got really scared,” Eijansantos said. “But, unlike those interviews, it wasn’t about me anymore. It was for the patients, so I pushed myself really hard.”

“Fight the Stigma!: A Charity Showcase” was a success. More than 200 people attended the event, and it raised about $1,000, most for Connected and some to help establish a new student group to provide ongoing support to the clinic and related causes.

Shannon Clark, the UC Davis Health doctor who runs Connected, was thrilled by what Eijansantos did and to know she plans to go to medical school. “She will be carried far by her strong drive and personal quest for a meaningful life and serving others — especially the underserved and most vulnerable members of society,” she said.