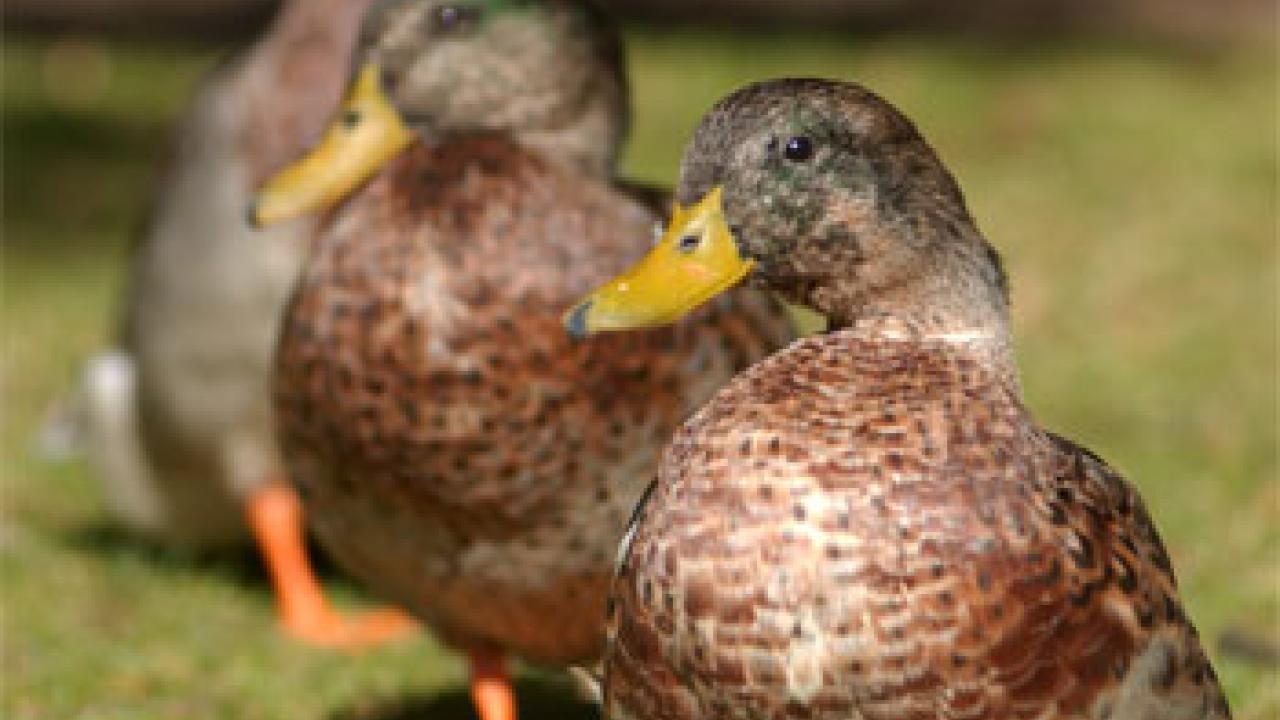 A virulent strain of avian influenza (H5N1), deemed by the World Health Organization to be "the most serious known health threat facing the world," could be heading to North America.

"Bird flu" has already killed 59 people of 115 confirmed cases in Southeast Asia since the end of 2003 and recently spread to Mongolia, Tibet, Siberia and Kazakhstan. Should a serious strain of avian influenza arrive here via people, poultry or wild birds, it could have major implications for California, caution researchers at the University of California, Davis.

UC Davis experts in human medicine, wildlife health and poultry health today briefed reporters on bird flu and its potential danger for people, and explained what the university is doing both to prepare for and help prevent the spread of a serious strain of influenza in California. The media briefing was held at the UC Davis Medical Center in Sacramento.

About avian influenza in birds and animals

Avian influenza is an infectious disease of birds that was first identified in Italy more than 100 years ago. It now is found worldwide. Wild waterfowl and shorebirds, particularly ducks and geese, commonly carry various strains of avian influenza but are not usually killed by it. However, wild birds have been implicated in the spread of flu to domestic birds, especially domestic ducks, chickens and turkeys. In domestic birds, avian influenza can make birds very sick and even kill them. Avian flu has also spread to domestic pigs and zoo tigers and leopards in Asia.

The very serious strain of avian influenza (designated H5N1) currently circulating in Asia was first diagnosed in a person in Hong Kong in 1997, and 59 people in Southeast Asia are known to have died from it since late 2003. These deaths have sparked concern that a worldwide influenza pandemic could develop.

Scientists believe that the conditions of animal agriculture in Asia have given rise to opportunities for the flu virus to spread among domestic poultry and to new species, including humans.

The epidemic of avian influenza in domestic poultry in Asia has resulted in an estimated 130 million poultry deaths and economic devastation in the affected nations. Although most poultry are not raised under the same conditions in the United States as they are in Asia, fears that the epidemic could spread here have sparked questions about programs in the U.S. for surveillance and prevention. And about potential economic impacts.

In people, human influenza virus is a regular seasonal health problem. Every year it kills about 36,000 people in the United States. Much of its persistence and severity is due to its extraordinary ability to mutate, or genetically rearrange itself. Today scientists and health officials are very concerned that an avian influenza virus and another influenza virus could combine into a new, very dangerous virus -- one that could have a high death rate and could also spread between people easily. Were such a virus to emerge, it could cause a pandemic rivaling the great influenza pandemic of 1918-19, which killed 40 million to 50 million people.

What UC Davis is doing

At UC Davis, these faculty members are working with colleagues on campus, at other universities, and in county, state and federal agencies to monitor for any appearance of avian influenza through poultry, wild birds and people.