UC Davis offers the following research expertise on election issues including the use of social media, the effect of moral viewpoints and election law. Also check out this election source list for media.

Twitter’s use as a political campaigning tool has been spreading around the globe since President Barack Obama tapped social media on the way to the White House in 2008. Twitter’s role in India’s 2014 elections, in turn, offers a critical lesson for candidates in this year’s U.S. races, says Saifuddin “Saif” Ahmed, a doctoral student in communication.

Not only were the winners the most active tweeters, they used Twitter to talk with and not at voters, Ahmed said.

“If there is one thing we learned from 2014 Indian election campaigning, it is that politicians have to interact more and not just use the medium as a broadcasting tool.”

America’s political divide runs deep — with vastly different views among left, right and moderate voters on the nature of right and wrong, according to a recent study by UC Davis political scientist Christopher Hare.

Hare and a colleague at the University of Southern Mississippi compared the political and moral views of more than 35,000 people from a 2008 survey conducted by the Pew Forum on Religion and Public Life.

They found that voters, regardless of religious affiliations, were divided politically according to their basic beliefs in the source of moral truth:

“The familiar divides we see in American politics are hardly superficial, but instead reflect fundamental differences in the ways individuals acquire and conceptualize moral knowledge,” Hare said.

In another study, Hare and colleagues found that voter surveys tend to understate the polarization of the U.S. electorate because voters — liberal and conservative alike — tend to place themselves in the middle of the political spectrum. 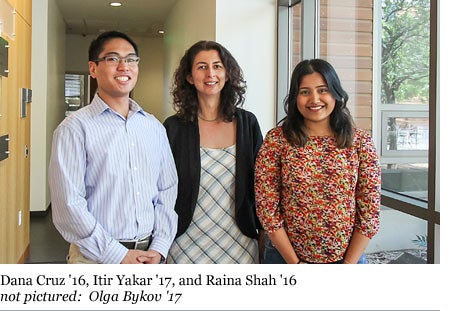 Adopted by voters in 1974 as Proposition 9, the Political Reform Act has been amended numerous times by initiative and by the Legislature, resulting in a body of law that the FPPC has deemed overly complex and inconsistent. FPPC officials say that in some cases, politicians accused of misconduct have used the complexity of the act as a defense; in others, potential candidates have been discouraged from running when faced with difficulties of navigating the act's complexities. In response, the FPPC has initiated the Political Reform Act Revision Project, in which UC Davis and UC Berkeley law students are working to redraft the act.

Students Olga Bykov ’17, Dana Cruz ’16, Raina Shah ’16, and Itir Yakar ’17 are working under the direction of FPPC Chair Jodi Remke and David Carillo, executive director of the California Constitution Center at UC Berkeley School of Law, and in collaboration with four Berkeley law students on a comprehensive review and revision of the Political Reform Act.

“The FPPC is always looking for innovative solutions and new perspectives,” said Remke. “The University of California, including UC Davis School of Law, attracts some of the smartest students in the world, so I can’t think of a better partner to help rewrite California’s cornerstone public trust law. I’m excited to see what fresh eyes and bright minds will produce for the benefit of Californians in the future.”

The students are nearing completion of their redraft, which simplifies the often convoluted language of the act into “plain English,” removes repetitive sections, inserts related regulations, and essentially rewrites the act so that it’s very straightforward. The draft will be reviewed by the FPPC and forwarded to the Legislature for approval — hopefully by the end of the year.