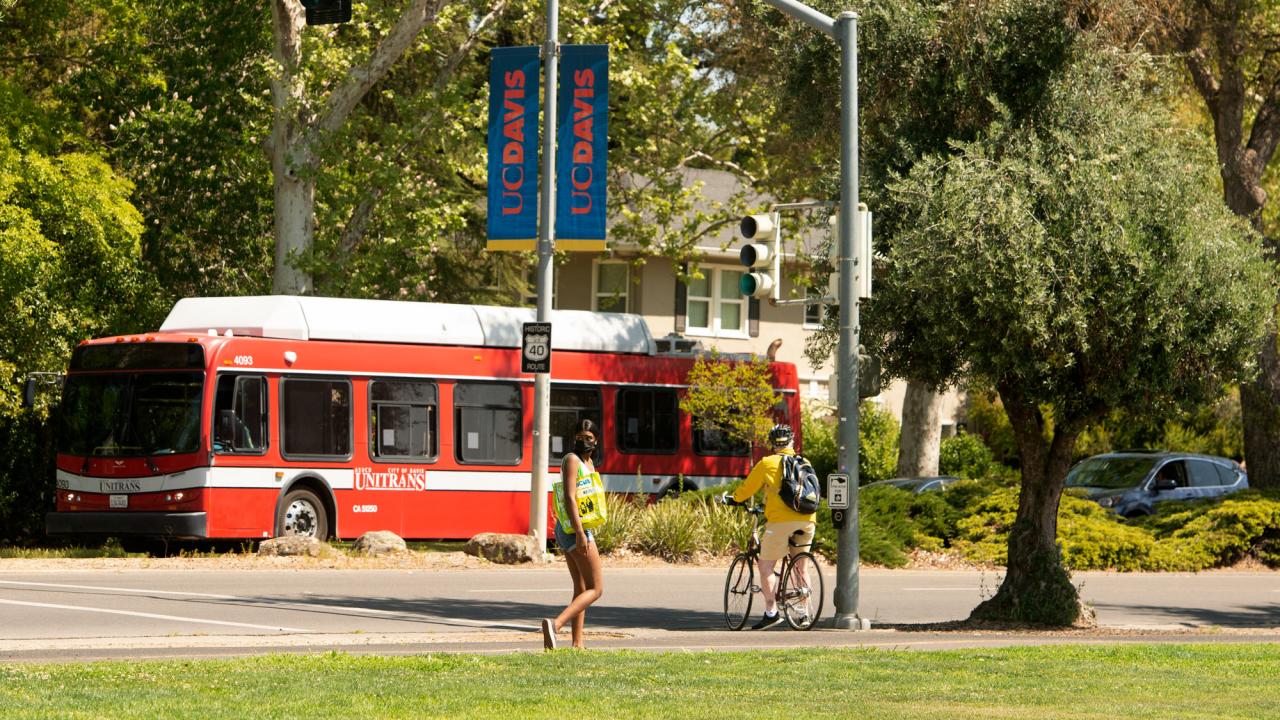 The city of Davis and UC Davis are inviting the public to join them in creating a streetscape master plan for Russell Boulevard, the major east-west thoroughfare on the main campus’s northern boundary.

City and campus officials envision a plan that includes extensive infrastructure improvements for multimodal transportation coupled with a reimagining of Russell as “a safe, beautiful and sustainable gateway to the city and university,” according to a news release.

Officials have scheduled a virtual community meeting from 5:30 to 7 p.m. Wednesday, April 28, to introduce “Reimagine Russell Boulevard” and provide an opportunity for community members to give their opinions of the corridor as experienced in the past and as envisioned in the future.

Editor's note: The meeting is indeed on Wednesday (April 28). An incorrect day appeared in a headline in the April 27 Dateline email.

Ingrid Stromberg, campus urban planner, emphasized Reimagine Russell Boulevard is not a capital project. “The deliverable will be a long-range vision including recommendations and design guidelines,” she said. “Future projects, with their own processes, will develop specific design and construction plans.”

The planning area takes in a three-mile stretch between the western city limit and B Street (where Russell turns into Fifth Street). It is a busy street, carrying some 8,000 bicyclists, 13,000 transit riders and 20,000 vehicles on a typical weekday, according to the news release.

“The road is an important movement corridor as well as a primary gateway between the city and campus, and this project will help us enhance the identity of each through ideas like enhanced pedestrian crossings, consistent landscaping and more sustainable stormwater solutions,” Stromberg said. “We also see great potential for increased safety and comfort of people moving in all modes, and to create pockets of inviting public space for resting and gathering.”

The planning area also includes Howard Way, leading in and out of campus. “We’re hoping to work with the community to identify areas all along the corridor for enhanced place-making, and one of those places is likely to be the Howard Way and Russell intersection, as it’s an important and historic entrance to campus,” Stromberg said.

“This means we will be asking people questions like: In 10 years, how do you want these intersections along the corridor to function, and what kind of experience would you want when you are there?

“We don’t have any specific plans at this time but will be looking at issues including the way both roads function (balancing bikes, pedestrians, transit and private cars), while also considering gateway landscapes and connections across Russell.”

Stromberg said the city and campus have a goal of a consistent look and feel on both sides of the street, “and we’re looking for input as to what that may be.”

“Also, we will be looking at how Russell Boulevard connects functionally into the larger transportation network,” Stromberg said. “The project’s engagement process will identify community priorities for Russell Boulevard in terms of values and outcomes.”

The city of Davis’ Brian Abbanat, senior transportation planner, said the city and university hope to ultimately create a third space (referring to a social space separate from home and work) that serves as a “signature interface” between UC Davis and the city.

The project website states: “This attractive, flexible and pedestrian-friendly promenade will cement Russell Boulevard as the regional welcoming space for gathering and socializing.

“Reimagine Russell Boulevard seeks to create a vibrant, green boulevard, comfortable for people of all ages and abilities, that reflects the innovative spirit of Davis while looking toward the future.”

Third Street and next steps

Before “Reimagine Russell Boulevard” came along, the campus’s east entrance was getting all the attention. The city redid Third Street between A and B with pipeline and utility work underground, and new pavers, wider sidewalks and other amenities above, including the Davis Needle, a 25-foot-tall obelisk created with reclaimed bicycle parts. The campus carried Third Street’s new theme to the university’s side of the block.

“The Third Street project is likely to be an inspiration for Reimagine Russell Boulevard, of how streets can change, and how design shapes space,” Stromberg said.

The final phase of “Reimagine Russell Boulevard” will take the recommended vision for the corridor and suggest a potential Phase 1 capital project that the city and-or university could choose to undertake, Stromberg said. “The terms of the agreement between the city and university include funding for the planning study, and any remaining funds may be used for the design and construction of future implementation projects,” she said.

She said the Reimagine Russell Boulevard team will explore potential additional funding sources for any future construction projects, including grants from regional, state and federal sources.