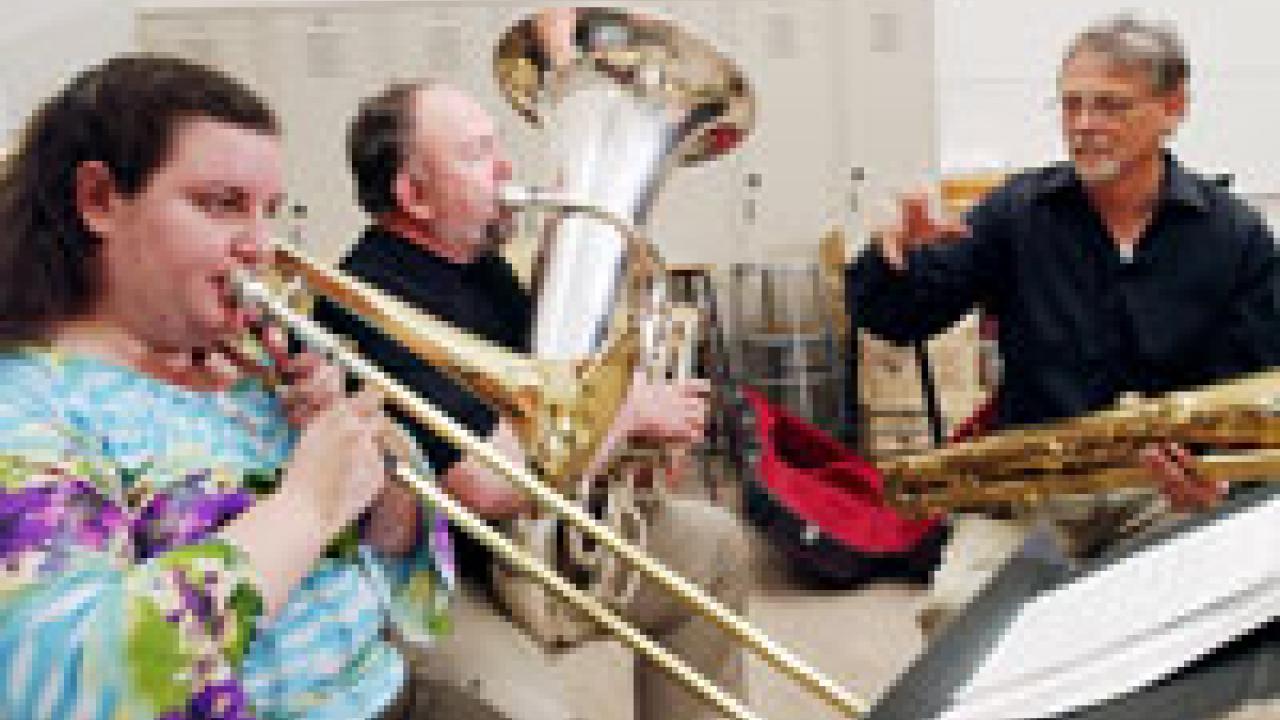 The UC Davis Symphony Orchestra is off to Paris June 17 to contribute to the French frenzy over composer Hector Berlioz's 200th birthday.

Conductor D. Kern Holoman and 78 orchestra members will give five concerts -- three in Paris and two in the provinces -- over eight days' time, all focused on compositions by the beloved French composer, who was born in 1803 and died in 1869.

Holoman is a renowned Berlioz scholar whose newest book, The Société des Concerts du Conservatoire, a chronicle of the Paris Conservatory Orchestra, is scheduled to be published this fall as part of the Berlioz hoopla.

What makes the UC Davis Symphony Orchestra more than just an ordinary American college symphony in the eyes of the French is the fact that few Berlioz experts have their own full orchestra -- like Holoman does -- that can test new musical theories before audiences.

UC Davis' orchestra was invited to help celebrate the Berlioz birthday through Holoman's connections as one of two Americans on an international Berlioz commission. The commission has been planning great events for the past five years to celebrate a man who is considered one of France's three most brilliant composers.

For Holoman, a music faculty member at UC Davis since 1973, the trip caps off "a year of almost unparalleled excitement."

The season started with a symphony recording of Berlioz pieces on CD in Freeborn Hall last summer followed by the October opening of Mondavi Center for the Performing Arts. The curiosity about acoustical improvements in the new venue -- plus the added seats -- has nearly quadrupled the symphony's audience this past academic year.

Holoman and his symphony have been graced with prestigious invitations in the past. For instance, in 1989 the group spent 3 1/2 weeks giving concerts in Tahiti and New Caledonia (former French colonies), as well as in Australia, to commemorate the bicentennial of the Republic of France.

This time, a two-week trip was triggered by an invitation from the Sorbonne University symphony conductor and a Sorbonne music historian. They asked Holoman and his orchestra to give two concerts with their French counterparts at the Sorbonne.

The second Sorbonne collaboration occurs on June 21, the French national music holiday. Initial plans are on hold for moving Berlioz's body from the Montmartre cemetery to the PantheÃ³n, where all the great men and women (minus any musicians) are buried. Neverthe-less, the nationwide music festival will be dedicated this year to Berlioz's memory.

The UC Davis musicians, 20 family members and friends will then travel south to Berlioz's birth place near Lyon.

"We're going to his birthplace where they are rolling out the carpet for us," Holoman says. One concert will be given at the Collégiale Notre-Dame in Mantes-La-Jolie and the other in "Berlioz country" at the Centre Culturel Aragon in Oyonnax.

Holoman says the last concert back in Paris will be the "piéce de resistance." The symphony will play at the Conservatoire National Supérieur D'Art Dramatique, now housing the Paris theatrical conservatory but once the concert hall where Berlioz had symphonies play his music before a thousand listeners.

UC Davis musicians will play before members of the French cabinet and the Paris Orchestra and "a few hundred of our friends" in the revamped hall, which now seats 600, Holoman says.

Holoman's wife, Elizabeth, will accompany the symphony at his request for a very academic reason. She is a French teacher at Davis Senior High School who is experienced at ushering students through the most-visited tourist town in the world. "I'm going to have more than 50 young people see Paris for the first time and I want them to have the cultural as well as musical experience," Holoman said. While his wife is organizing cultural forays, Holoman will be participating in three academic roundtables on Berlioz during the visit.

Members of the symphony who are going to Paris include 53 undergraduates, one high school student, one medical school student, a dozen alumni, faculty and staff members, and community musicians. In addition, two music department instructors will be on the trip: Ellen Ruth Rose, who will be the viola soloist during the performances, and baritone singer David Newman, who will provide the vocals.