Healthy Davis Together Distributes 2,500 Grants to Students Who Opted to Stay in Davis During Spring Break 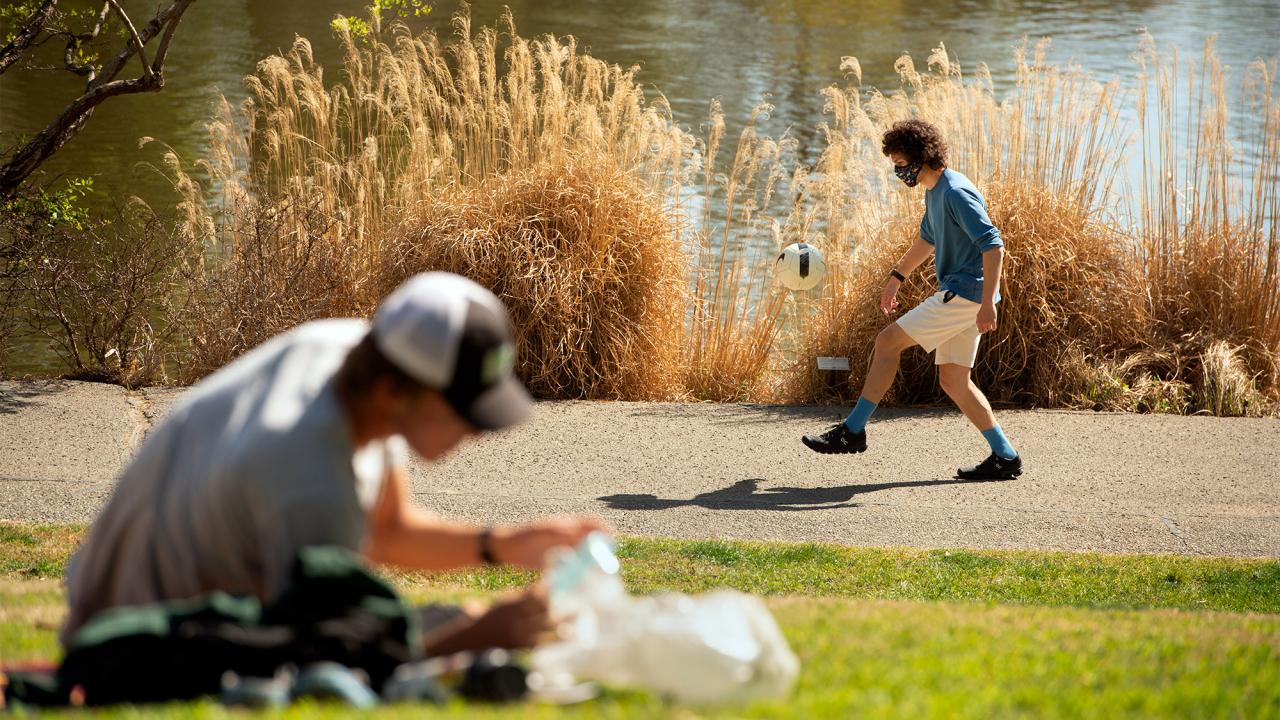 Ph.D. candidates and engaged couple Brent Weyers and Sarah Dimitratos had been thinking about a spring break trip to Lake Tahoe, but spent some time at the Putah Creek Riparian Reserve instead.

Junior landscape architect major Olivia Wreden had been thinking about a trip to the Bay Area to see family members but stayed home to garden with her roommate.

Those are just some of the 2,500 students who received spring break grants — in the form of $75 gift cards to one of four local businesses — for agreeing to stay home last week to slow the spread of COVID-19.

“The grant was a very nice incentive for us to stick around Davis for spring break and find a way to be active safely in our community,” said Weyers, a Ph.D. candidate in biomedical engineering. He and Dimitratos, a Ph.D. candidate in nutritional biology, pooled their grants to buy shoes and running shorts at Fleet Feet in Davis, then used them on hikes at the reserve. “During spring, many flowers are blooming, the grass is green, and it is absolutely beautiful out here. Additionally, I only usually see about three people per hour out on the trails here; between the large trails and the low number of people, this is a very safe place to exercise and be COVID-safe.”

Grants increased after flood of applications

Healthy Davis Together, the partnership between UC Davis and the city of Davis, initially planned to give out 750 grants, but after a whirlwind of applications and attention that included thousands of articles and mentions on television from media outlets from around the world, officials bumped the total up to 2,500.

Sheri Atkinson, associate vice chancellor for student life, campus community and retention services in Student Affairs, said she was happy to be able to give out more gift cards, because it all furthered the No. 1 goal of Healthy Davis Together.

“If we could reach out to any number to be able to help impact their behavior, that is good,” Atkinson told The Washington Post. “The more, the better, and the more effective it will be in preventing the spread of COVID.”

Students who live in Davis full-time and agreed to take a “staycation” last week — as well as a COVID-19 test — could apply for a grant in the categories of Get Active (Fleet Feet), Get Artsy (The Paint Chip), Let’s Stay In (The Avid Reader) or Home Improvement (Ace Hardware). The approved students were able to pick up their gift cards Monday (March 22).

The grants were paid for by state and federal funding, along with philanthropic support.

Tania Madrigal, a senior majoring in managerial economics, chose four new books from The Avid Reader, to further a habit she’s returned to during the pandemic.

“I felt like I was spending an unhealthy amount of time on my computer, cell phone, and watching TV,” she said. “I decided to go back to reading because it was an escape for me as a kid. It has changed my experience during the pandemic incredibly.”

Madrigal, who said she’s been opting for critically acclaimed books she hasn’t had time to read previously, said it’s helped her relax.

“It became my time to unwind from all the Zoom meetings, and reading replaced my habit of reaching for my phone between meetings,” she said. “Now I reach for my book.”

Benjamin Faulkner, a Ph.D. student studying paleontology, picked up a new pair of shoes and took them to the Arboretum to spend time juggling a soccer ball. He said he ran track during his undergraduate studies, but had to cut back on physical activity after being diagnosed with an autonomic nervous system condition that left him drained after basic tasks.

“It's kind of silly and absurd, but it represents the mental endurance that has gotten me this far despite these unexpected challenges,” he said of his soccer-ball activity. “It also means that all the time I spent practicing in years gone by can potentially still inspire people or just bring their day a little bit of joy.”

Wreden, whose visit to see her family in the Bay Area would have been the first such trip in months, said she enjoyed her alternate activity of germinating new seeds, planting flowers and other gardening at home.

“During the last year I have tried my best to stay safe to protect myself and those around me and I will continue to do that, even if I miss my family immensely.”