State of the Campus: ‘Transforming Lives’

Chancellor Gary S. May related “a story of excellence across the board” in his State of the Campus address last Thursday (Feb. 21) at a meeting of the Academic Senate’s Representative Assembly.

“UC Davis continues to transform lives around the world through our research, through our scholarship that empowers students and through an innovative spirit that shapes a better tomorrow,” he told an audience of about 60 people in the multipurpose room at the International Center. 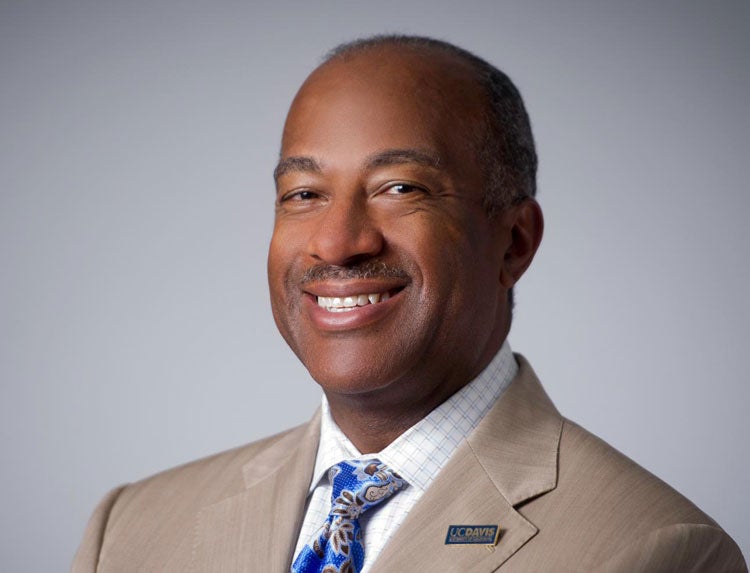 “You’ll find here a story of aspiration — no matter how much we excel at UC Davis, we always aim higher.”

This was May’s second annual State of the Campus address, after assuming the chancellor’s office in August 2017, and his remarks reflected the quick pace of his efforts.

For example, beginning in January 2018, he and his team set out to develop a new strategic plan — and it was in place nine months later, titled “To Boldly Go,” the product of a steering committee of faculty, staff and students, and broad-based input gathered from both campuses in dozens of forums, at town halls and in small group meetings, and online.

The plan, May said in his State of the Campus address, “provides a roadmap for success over the next decade” and “reflects a UC Davis that’s driven by curiosity and a pioneering spirit.”

He reviewed the plan’s five goals — education, research, diversity, visibility, and innovation and entrepreneurship — and cited examples of progress in each area, such as hiring more educators who are innovators and leaders in pedagogy (and providing modern teaching areas to match), achieving federal designation as a Hispanic Serving Institution, and laying the groundwork for Aggie Square (including a newly announced collaboration with IBM).

Here are some of the other topics he addressed in his 35-minute speech:

Rankings — “In 2018, we reached the top 10 in five different national rankings of universities. … And what’s more, we made Washington Monthly’s Top 10 list of all universities — public and private — for the third year running. I’m especially proud of this one, because their rankings are — quote — “not based on what colleges do for themselves, but on what they do for their country.” He emphasized: “Our rise in rankings wouldn’t be possible without the exceptional scholarship of our faculty.”

Research and discoveries — The chancellor cited Laura Marcu, inventor of a light wand that detects cancerous tissues (and newly inducted into the National Inventors Academy); Simon Cherry and Ramsey Badawi, who developed a scanner that can image the entire body in under a minute; Alan Bennet and his team, growing corn without synthetic fertilizers (a “game changer” for agriculture); and Harris Lewin, who leads the Earth BioGenome Project, a decadelong effort to sequence the genomes of all living beings (considered the most ambitious effort of its kind and has the potential to change the way we think about evolution and biology).

Finances — “We’re still interpreting the numbers (of Gov. Newsom’s budget proposal), and other dynamics are in play, but from what we see, the increased state funding for UC is a welcome step. … However, the proposal as it currently stands, falls short of our needs. The primary incremental cost increase is for salary and benefit cost increases for faculty and staff.  The Office of Budget and Institutional Analysis estimates costs of over $32 million — but our likely share of new state funds is $12 million. And since the governor’s budget assumes a tuition freeze, we have a gap of $20 million.

“Also, the governor’s budget does not provide ongoing funding for about $7 million in one-time funds that we received this year in lieu of a tuition increase.”

Students’ basic needs — “Now, I’d like to move to the heart and soul of campus: our students. They have major concerns that we’re addressing, and they go far beyond sleep deprivation and the stress of finals week.” He noted his formation of three task forces, his approval of all of their recommendations and his appointment of the Basic Needs Oversight Committee to implement the recommendations.

On student housing, he said UC Davis has “a green light for construction to begin on 9,000 beds of new on-campus housing” — including 3,300 beds at West Village. Read news release on the formal groundbreaking at West Village.

“I’m proud that we’re not just making progress on student housing, but we’ve entered a new era of partnership with the city and surrounding region. We have a fresh opportunity to build community and foster student success.”

Campus closure — “I know this was a disruptive time, and I thank everyone for your patience. I’d also like to thank the Academic Senate for guidance in helping us manage the closure, especially as it occurred during midterms.

“We’re working to be better prepared if a situation like this happens again. At the time of the Camp Fire, there were no hard-and-fast policies in place for evaluating air quality at UC Davis or for the UC system.”

In response to questions …

Rebranding — Columbus, Ohio-based Ologie is just beginning to do research for this initiative, and the chancellor and his staff assured that the university is not duplicating efforts associated with the launch of “One UC Davis” five years ago. In fact, the university did not go through with a plan to have an outside company conduct research for that campaign.

“Unique opportunity” — Chancellor May said the branding exercise, new strategic plan and new capital campaign, all happening around the same time, present a “unique opportunity” of opportunity for the university “to make a jump in influence, capability and visibility.”

Faculty hiring — May said the university is leveling off its undergraduate enrollment, allowing the university to catch up on hiring and classroom and research facilities.

Faculty and staff housing at West Village — Vice Chancellor Kelly Ratliff said, “We still have plans, but, unfortunately, as the recession hit and the market changed, the financial dynamics shifted. So we’re continuing to work and rework what it would like to add faculty and staff housing out at West Village. The site is still dedicated for that purpose, it hasn’t been reassigned to student housing.”

State of the Campus Chancellor Gary S. May Headline