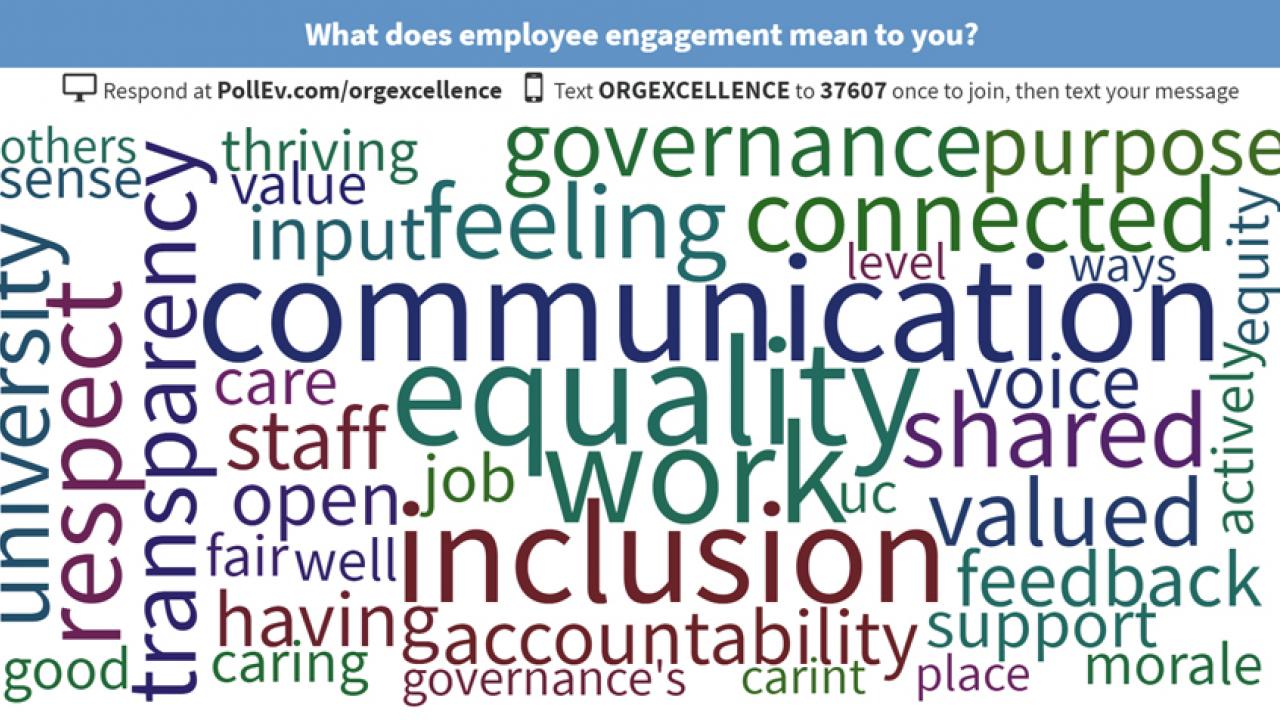 Staff Engagement Survey Results Ours to Own

The best way to get the most out of our staff engagement survey results is for all of us to own them, Staff Assembly and Human Resources leaders said at last week’s All-Staff Town Hall.

Brenda Rebman, chief HR officer, noted the 2017 survey results show UC Davis staff engagement trending upward from the first two times the survey was administered (in 2012 and 2015) — only a point or two, she acknowledged, “but it’s still trending upwards (and) going in the right direction.” Still, she said, there is always room for improvement.

“The best solutions come right from the front lines,” she said, encouraging people to share the results “and work within your departments to say we’re going to pick one thing this year or two things that we can do locally.”

The Council of UC Staff Assemblies, or CUCSA, developed the survey five years ago in collaboration with systemwide HR. The 2017 survey went out in May to a random sampling of 20,000 nonrepresented employees around the UC system. (Represented employees are not included because they can contribute feedback through their bargaining units.)

Along with presenting the latest survey data, the town hall organizers invited real-time feedback online or by text message for the purpose of creating word clouds, on such questions as “What does employee engagement mean to you?” and “What types of employee networking activities would you recommend?”

The responses came from the 50 or so people attending the town hall in person, held Dec. 14 in the ARC Ballroom, and from others watching the livestream (it registered 299 views). As people hit “send,” their comments populated a word cloud — and it changed every second or so to reflect the weight of the comments; i.e., the more mentions of particular words, the bigger the font size for those words in the cloud.

The survey at UC Davis drew 1,122 responses from staff members on the Davis campus and in the School of Medicine and the Betty Irene Moore School of Nursing. (UC health systems do not participate, because they conduct their own staff engagement surveys.) The UC Davis target audience numbered about 4,000 nonrepresented staff with at least one year of service.

Rebman said the results showed improvement from 2015 to 2017 in six out of eight categories; and an overall engagement score of 71, compared with 70 in 2015 and 69 for UC overall in 2017. The survey company, Towers Watson, reported a national norm of 73.

“Now, can we make a drastic influence on some of those trends?” Rebman asked. “That’s what we’re hoping we can do, working together with you.”

Staff Assembly Chair Kate Shasky noted the work of Staff Assembly, Human Resources and the Staff Diversity Administrative Advisory Committee on issues raised in the previous staff engagement surveys — for example, in the areas of career development and performance management. “But we wanted to bring it back to you and say, ‘Now, what can you do in your units, how can we partner with you, how can we sort of show you what we’ve done?‘ ... Because there’s only so many things that the university, the organization can do. But there are things that you can do in your unit as well.

“Or you can get involved in Staff Assembly,” she said, always looking for more volunteers.

Rebman highlighted the 10 items from the 2017 survey with the highest favorable scores, including:

Rebman also went over the 10 items from the 2017 survey with the least favorable scores, including the two at the bottom, both having to do with organizational change.

Shasky noted the administrative tumult of the last few years, “so one of the biggest issues was change management, yet we only went down a very insignificant amount when it came to change management.”

Feedback regarding the staff engagement survey is welcome; send to engagementfeedback@ucdavis.edu.