The $86 million Teaching and Learning Complex, or TLC: the Davis campus’s first general classroom building in more than 50 years, under construction next to the Silo in the center of campus. Workers recently hoisted the special beam and set it in place in one of the last phases of steel construction for the 101,663-gross-square-foot, four-story structure.

The beam wasn’t the last one to go up, nor does it sit at the top of the building. So, instead of a “topping-off” ceremony, Design and Construction Management gathered signatures of students, faculty and staff — about 160 people in all — to be affixed to the beam, a signature beam, if you will. It will be forever visible as part of the canopy at the building’s southeast entrance. 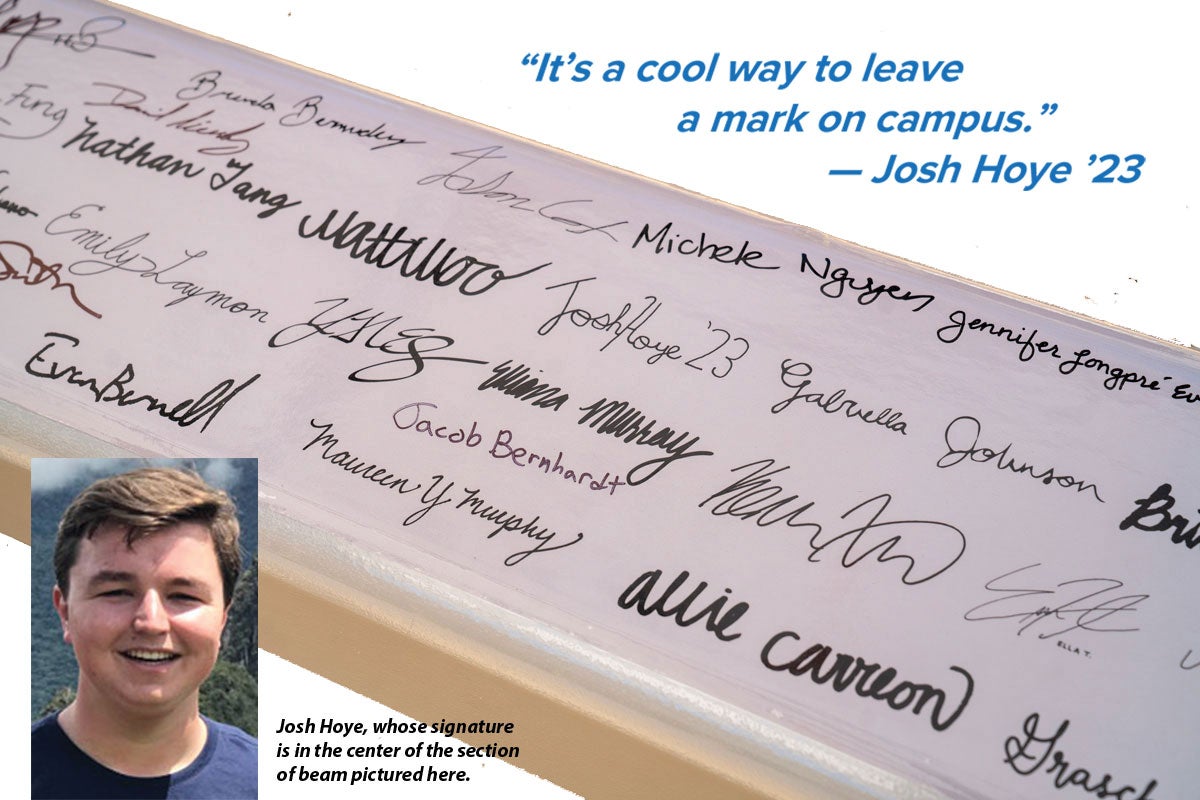 “I participated because I thought that it would be a cool way to leave a mark on campus,” said Josh Hoye ’23, who in late July answered the campus's invitation to everyone to submit their signatures electronically. “I’m really glad that it worked out, I think it’s an interesting legacy to have around campus.”

Christine Knobel, an alumna who is a lecturer in the Department of Design, had the opportunity to attend the in-person signing event, Aug. 4. Attendance was limited, because of the pandemic.

“UC Davis has given me so much: community, support and encouragement to pursue my dreams,” said Knobel ’16 (Bachelor of Arts in design) and M.F.A. ’18. “Having the opportunity to sign the TLC topping-off beam was another way I could commit to this incredible institution.”

Hoye, who is double-majoring in international relations and French, also noted the UC Davis influence in his life: “My grandfather attended Davis, ’55. To me, my signature on the beam represents all the hard work that I put in to getting here.”

His and Knobel’s signatures now live among those of Gary S. May, chancellor; Mary Croughan, provost and executive vice chancellor, and her predecessor, Ralph J. Hexter; and Pablo Reguerín, vice chancellor of Student Affairs — among the 40 or so people who registered for the in-person event. They signed their names on decals that had been preprinted with about 120 other signatures, those that came in online.

On and under the canopy

The contractor will affix the decals to the 18-foot-long beam when other construction in the vicinity of the canopy is completed, and thus cannot damage the signatures.

Still to come atop the canopy: photovoltaic panels, generating power to offset the building’s energy consumption. And under the canopy: stadium seating — a place for students to study and hang out — and a stairway to the TLC’s second floor. A balcony at the top of the stairs will offer a good vantage point to see the signature beam.

The TLC will see thousands of students climbing those stairs daily, considering the auditorium and classrooms will have a capacity of just under 2,000 at any one time. The building is due to open in the spring of 2022.

Another person who signed in person, Professor Emeritus Ken Burtis, former faculty advisor to the chancellor and provost, gave two reasons for the pride he feels in having his name associated with the TLC.

“It represents one of the major outcomes and fulfills one of the promises of the 2020 Initiative that I spent so much time on,” he said, referring to the initiative under which UC Davis grew its enrollment by about 5,000 students.

“And because I have spent many years focused on how to improve learning outcomes for our students, and this building will provide a laboratory for the faculty to experiment with how to improve teaching and learning.”

Some of what Burtis and others built into California Hall (the lecture hall that emerged from the 2020 Initiative) is going into the TLC, too. In the auditorium, for example, instead of having individual desks, students will share tabletops and will have seats that swivel, allowing the students to face one another for group work and discussions. Two extra-large classrooms (173 seats) and a large classroom (124 seats) will also have tabletops and swivel seats. Other classrooms will have moveable tables and chairs.

“My only regret is retiring before having the opportunity to teach there,” Burtis said.

‘Teaching center of the future’

Matthew Traxler, associate vice provost for academic planning in Undergraduate Education, and a professor of psychology, said of the TLC planning process: “There was a lot of input from faculty, from students, from CEE [Center for Educational Effectiveness], that said we have an opportunity here to create the teaching center of the future for UC Davis.”

Traxler joins Marco Molinaro from Undergraduate Education in a video (at the top of this page) celebrating the end of steel construction.

Molinaro, assistant vice provost who leads the Center for Educational Effectiveness, said: “For me, the Teaching and Learning Complex is really a new start, a new opportunity to get going with UC Davis and active learning, but also create something new and innovative where the building actually can give us feedback about the learning process that’s going on in the building, and we can collect data.”

The feedback will come by way of a teaching and learning lab with seating for 80, or which can be divided into two 40-seat classrooms. The lab will be outfitted with cameras and microphones, for recordings that can be analyzed later for instructional improvement efforts — and wiring will be installed so the system could one day be expanded to other classrooms in the TLC. Video will be blurred to maintain student privacy.

Molinaro said he had never experienced a beam-signing before. “But, I’ll tell you, I’ve been involved in at least three different projects related to building on this campus, and this is the first time I feel like I’m right in the heart of it and have really had a big impact on what’s happening in the building, and so I feel really proud to be able to sign the beam.”