Researcher Uses ‘Petitation’ — A Form of Meditation With Dog Companions

Elisabeth Paige has long struggled with bipolar disorder, and had experimented with many forms of treatment. Medication provided some control of the illness, but she still experiences times of desperation and pain.

Among the treatments, therapists suggested she meditate, which she agrees is one of the best ways to deal with many forms of mental illness, including depression, anxiety and bipolar disorder. But, she couldn’t do it.

“I tried it. I hated it. I couldn’t concentrate and be still and quiet for 10 minutes,” lamented Paige, who holds a doctoral degree in public health. Worse, her difficulty with meditation furthered her feelings of failure.

A research associate in the University of California, Davis, School of Veterinary Medicine, Paige decided years later to give meditation another try. But this time she held her dog in her lap, petted him and concentrated on him alone. She discovered she was much calmer and felt better when she sat and petted her schipperke, Pago, rather than focus on her breathing, as ordinary meditation encourages.

She soon learned, that by petting Pago and relaxing, she was practicing mindfulness. And it worked. Petting her dog for extended periods of time made her feel calmer and more in control — it lessened the tremors she experienced from her medication. And her dogs (she has another schipperke named Pippi) liked it too.

Elisabeth Paige and Pago will be reading from the book, The Petitation Companion ($19.99), at Avid Reader, Sacramento, 3-5 p.m., Saturday, May 6.

She decided others could also benefit from the practice. She started with friends and neighbors, and people she met on walks with her dogs, and began creating a form of treatment she called “petitation” — a term she said she has coined and copyrighted. She wrote about the practice in a new book called The Petitation Companion: Enhance the Lives of You and Your Pets with Mindfulness Meditation. The book’s cover shows an illustration of a dog posed as Buddha.

Written from the point of view of Pago — an idea first scoffed at by many, including her eventual co-author and mother, Joanne Leslie — the narrator dog takes readers through the process of petitating.

In the book’s introduction, Pago writes: “The Petitation Companion describes ten Petitations. Notice the lists describing the way to practice each of the Petitations. We hope you learn from the science and quasi-Buddhism and take delight in reading about our adventures.”

Easy, step-by-step instructions take a reader through petitations on grief, happiness, frustration, gratitude and a host of other emotions. As in traditional meditation, deep-breathing, relaxation and focusing are important parts of the practice. Paw prints stand in graphically for bullet points. The book has an accompanying website, and offers voiced petitations, by Paige, accompanied by music.

Paige explained that she created petitations to make meditating easier for people. The dog’s narration takes that a step further. “We wrote the book from Pago’s perspective to make it even more accessible and fun,” she said. 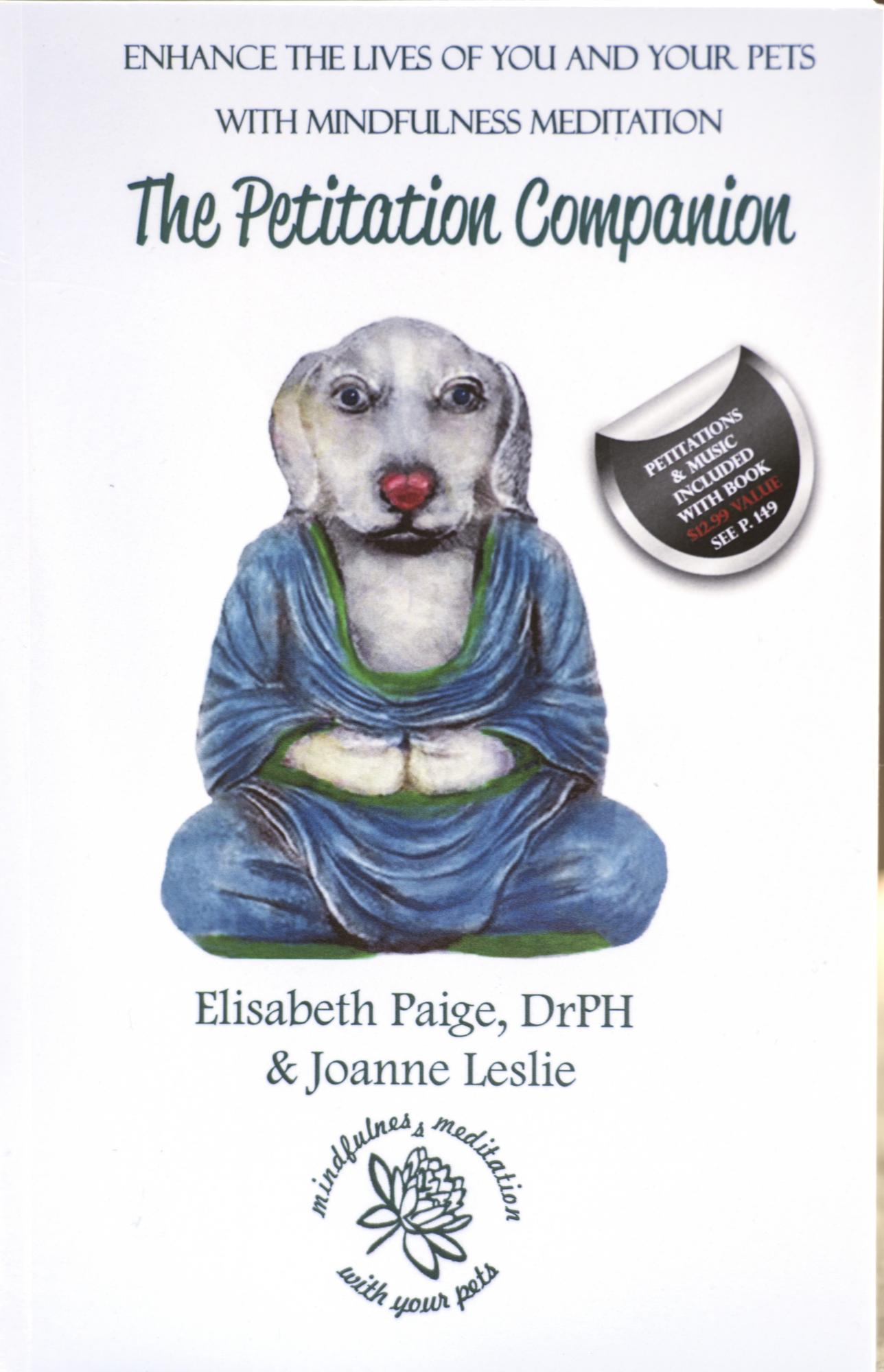 In the book, Paige discusses her difficulty with traditional meditation — and her solution — in a conversation narrated by Pago. “Most pet lovers can focus for at least a few minutes on stroking their pets. This can be how the fur feels or the rhythm of their heartbeat or breathing.” The focus, then, is on the pet, not an object in the room or something else, Paige explained in an interview.

This is Paige’s first try at writing a book that is part fiction (some characters referenced in The Petitation Companion, other than Paige and her dogs, are fictional). For 20 years, she wrote articles, and even a full-length book, on public health issues and other research. With her focus recently on service dogs, she “fell into this one.”

From Pago’s point of view, the book discusses emotions that dogs and humans have in common as well as personality traits that they don’t share: “It’s so hard for me to understand humans. We dogs are so much more grateful…. Unlike humans … who are sporadically grateful, we dogs appreciate almost everything.”

In the works — a petitation companion book for children.

This is one in a series of stories produced for Mental Health Awareness Month illustrating how UC Davis plays an active role in research, treatment and recognition of mental health issues.