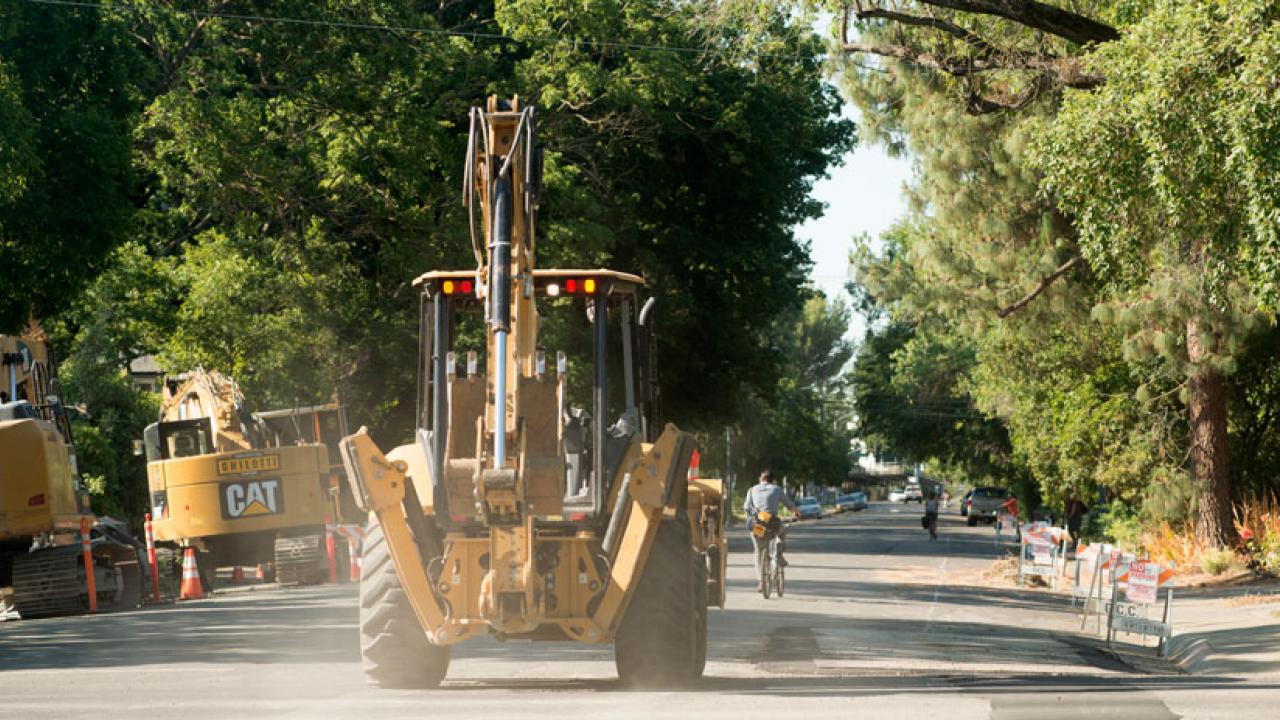 The Woodland-Davis-UC Davis surface water project started its first deliveries in the two cities last week, but the new domestic water supply will not flow from campus taps until Nov. 1 at the earliest.

The Sacramento River water makes its way through a new treatment plant in Woodland, and from there a main line carries water to north Davis. UC Davis taps into that main in the vicinity of F Street and Covell Boulevard (near The Cannery) — taking the campus' supply of surface water before it mixes into the city's distribution system. Thus, UC Davis has sole control over the university's supply of water from the treatment plant, and the process of blending that water into the campus's 88-mile-long distribution system.

The university's supply line comes south on F before jogging over to A Street — where crews are at work now, heading due south to Toomey Field at the northeast corner of the campus. From there, the campus will extend the pipe west to California Avenue — and the connection to the campus's distribution system will be made under that street.

The Woodland-Davis Clean Water Agency contracted with the internationally recognized engineering firm Trussell Technologies Inc. to study and provide recommendations on how to successfully introduce the treated surface water into existing distribution systems fed by wells. Based on those recommendations, UC Davis Design and Construction Management and Facilities Management will:

Since there is no known lead piping in UC Davis’ domestic water system, the possibility of lead contaminating the campus’s water supply is a nonissue.

Campus officials also note that the new treatment plant is producing water that exceeds government standards for drinking water. The entire distribution system is being closely monitored; UC Davis will take samples at its connection point and at locations throughout campus.

The university, like the cities, will blend its new surface water with well water. On campus, the blend will vary with the seasons: In the summer, when water consumption is higher, a higher percentage of groundwater will be flowing. However, everything that comes out of the taps is being treated with safety in mind. The university is closely watching the introduction of the new water supply in Davis and Woodland, to help inform campus processes before the switchover this fall.

This new high-quality source of domestic water is made possible via water rights belonging to Davis and Woodland. UC Davis transferred its rights to the Woodland-Davis Clean Water Agency in 2009, and reserved the option to buy into the water project for 1.8 million gallons a day. UC Davis exercised its option in 2014, and is paying $20 million as the university’s share of overall project costs not paid previously, and for distribution pipelines and other facilities to serve the campus.

The treated surface water has a chemical makeup that is different from the makeup of the water that comes out of campus taps today. The surface water is naturally “softer” than the groundwater, so water softeners may not be necessary. However, if you are a researcher with a project that is set up to run on the campus's domestic water as it is now constituted (i.e., pH, mineral content, etc.), you should send an email to the project team to request a copy of the water analysis report and discuss possible mitigation options.

Here's what to expect

As the surface water is slowly introduced into the campus’s system, the first thing you’ll hopefully notice is an improved taste, as many people prefer the flavor of surface water. Initially, the water may be a little cloudier due to air bubbles in the system. Long-term, departments using water softeners may not need them or should see prolonged service life from those treatment systems.

If you notice problems or have concerns with the water (e.g., odors, red hue, poor taste), contact the Facilities Management Customer Support Center by phone, 530-752-1655 or email.

The earliest the campus will see any impact from construction is around the Fourth of July, when crews are due to extend the A Street pipeline under Russell Boulevard to just outside the Toomey Field fence. The boring technique they’ll be using is, according to project manager Scott Arntzen, “pretty boring.” In place of large trenches and detours, the contractor will push and pull sections of pipe into place with minimal aboveground disruption.

As construction of the pipeline makes its way onto campus, more information will be shared in Dateline and on a website being developed to communicate news and information about this project. In the meantime, campus-specific surface water questions can be sent by email to surfacewater@ucdavis.edu.