As we make discoveries about the causes and treatment of cancer, the people who care for human patients and those who treat their pets are finding that they have much to learn from each other. And nowhere is better placed to develop those links than UC Davis, home to the nation’s top-rated School of Veterinary Medicine as well as a nationally designated comprehensive cancer center.

“Most of what we practice in veterinary oncology comes from human medicine,” said Michael Kent, professor of surgical and radiological sciences and director of the Center for Companion Animal Health at the UC Davis School of Veterinary Medicine. “Now dogs are going to help the other way, and hopefully speed development of new treatments.”

The Comparative Oncology program at the UC Davis Comprehensive Cancer Center links specialists and researchers in human and animal cancer. The program has organized about 30 clinical trials in dogs, ranging from collecting tissue from patients up to randomized, controlled trials of new drugs.

A pipeline for cancer research

Dogs have evolved alongside us and share our homes and environment, Kent said. They also have an immune system closely related to ours.

By working together, basic scientists, veterinarians and physicians at UC Davis have been able to build a pipeline for cancer research, said Arta Monjazeb, professor of radiation oncology at the Comprehensive Cancer Center.

Testing a new drug in human patients requires “investigational new drug” approval from the Food and Drug Administration. This isn’t needed for clinical trials in dogs, but these trials still require informed consent from owners and other safety and ethical safeguards.

“We can take our most exciting findings from basic research in mice, and through the veterinary school translate them into clinical trials in pet dogs,” Monjazeb said. “That allows us to test therapies and weed out those that are not likely to be of benefit to our human patients, and for the veterinarians it gives them access to cutting-edge therapies that otherwise would not be available.”

One such veterinary patient is Grayson, a 6-year-old beagle. Grayson was just a 2-week-old pup when Evan Jost, a marine veteran just returned from Iraq, picked him from the litter. The two have been together ever since. Today, Grayson is an official support dog living with Jost in his dorm at Loyola Marymount University in Los Angeles — and the only canine resident on campus. 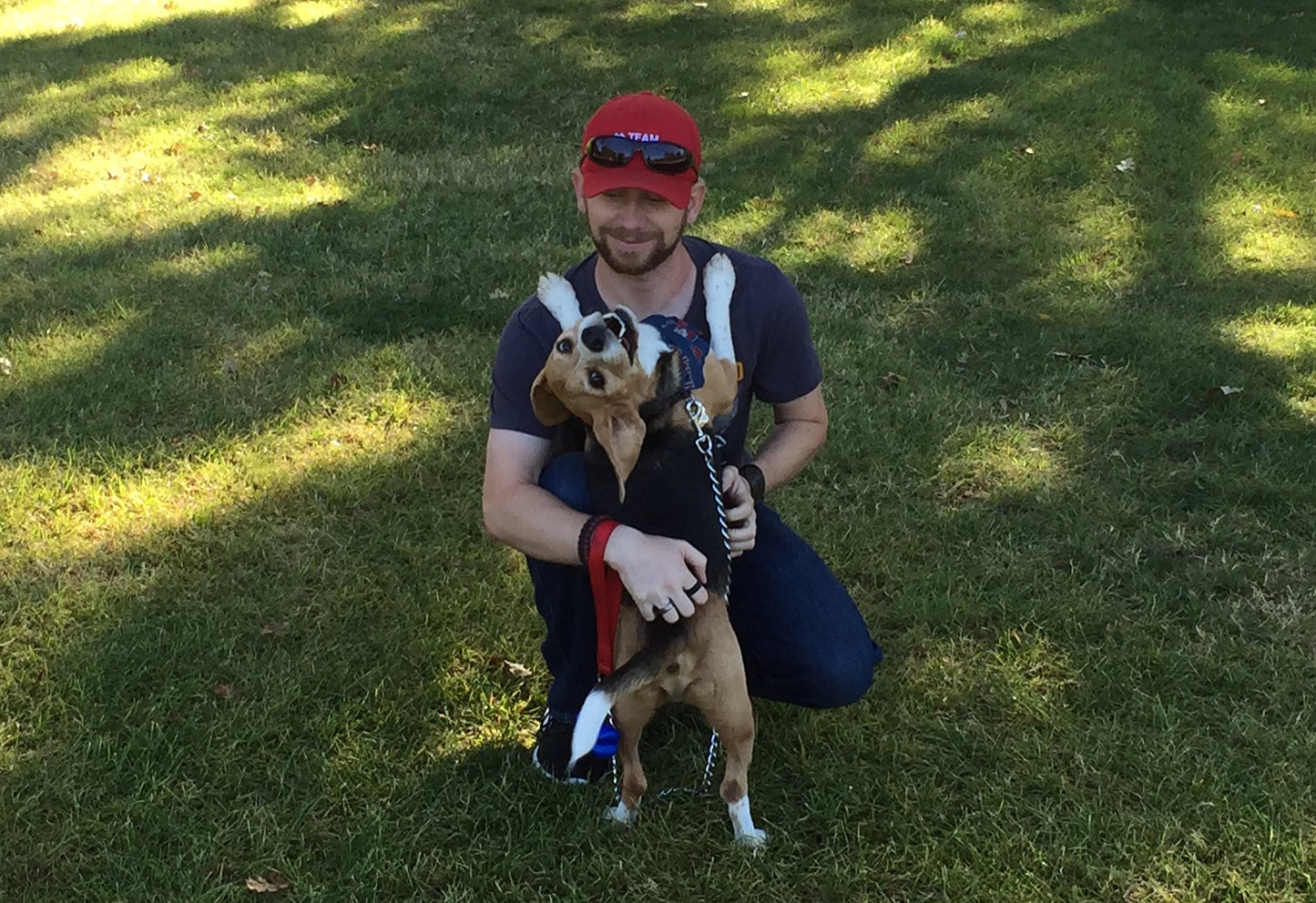 “My veterinarian gave me the number for UC Davis, and I made the first appointment I could,” Jost said. “They told me about the clinical trials, and it seemed really interesting.”

Grayson was enrolled in a trial of a new formulation of doxorubicin. The drug is widely used to treat lymphoma and other cancers in humans but can have toxic effects on the heart. A new formulation, developed by Kit Lam, professor of biochemistry and molecular medicine, and colleagues at the UC Davis School of Medicine, packages doxorubicin inside tiny particles. The hope is that the particles carry the drug more directly to the tumor and reduce side effects on other tissues. If successful in animal trials, the new formula could make its way into use for people.

“We’re trying to create a formulation that will work better against cancer and be safer to give to our dogs, cats and people as well,” said Jenna Burton, assistant professor of clinical medical oncology at the UC Davis School of Veterinary Medicine, who is leading the trial. “We really need better treatment options, not only for our dogs, but also for people. While the cure rates are better in people, many people diagnosed with non-Hodgkin lymphoma will die from their cancer or suffer long-term side effects secondary to the drugs used to treat it.”

Over the summer and fall, Grayson received four infusions as part of the trial and his disease went into remission, although it did not disappear.

“I’m just extremely grateful to UC Davis to have had all this extra time with him,” Jost said. “Every minute with him is a blessing and I’m eternally grateful for that.”

It’s early days for this new doxorubicin formula. The current trial is designed just to test how well the micropackaged drug is tolerated, but if successful it could move to large clinical trials in dogs and ultimately in humans. The veterinarians, physicians and scientists at UC Davis hope that working together, they can give more time to dogs like Grayson and the people who love them, and one day to people with cancer as well.