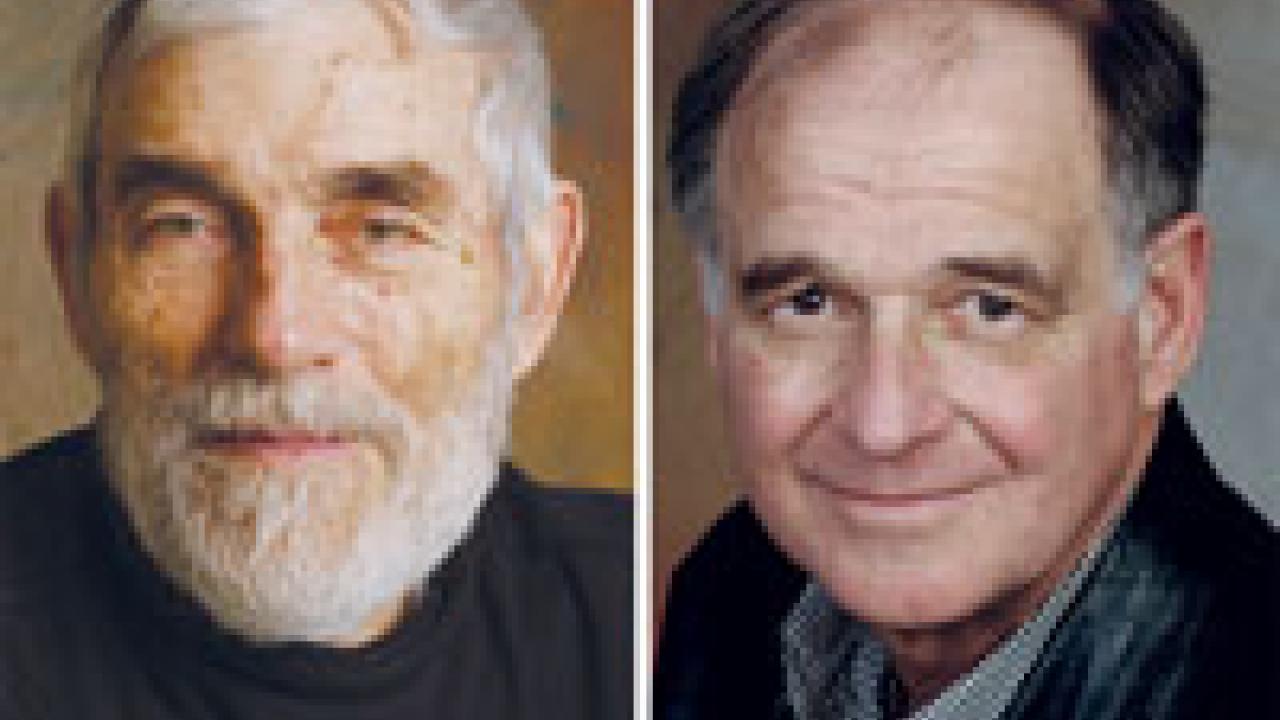 The AGR room of the alumni center was full on an overcast day last fall when Barry Klein got up to speak at UC Davis' first Venture Capital Day. The vice chancellor for research was hoping to encourage a healthy drizzle of dollars onto the campus from an audience of venture capitalists and business leaders from around northern California and Nevada.

"There has been a sea change in universities, especially in the University of California, in being more proactive in commercializing research," Klein said. "I'm overwhelmed by the enthusiasm of our faculty."

A sea change indeed. When plant geneticist Ray Valentine wrote a white paper in the late 1970s proposing an institute to spin off commercial products from campus research, the university wasn't interested. And when he co-founded a company, Calgene, to exploit research in plant genetics, that lack of interest turned into a raucous campus dispute.

It began in 1975. Valentine, a young professor in the Department of Agronomy and Range Science at UC Davis, found himself invited to a meeting at the Asilomar Conference grounds near Monterey. The topic was the new field of recombinant DNA technology--the ability to take a piece of DNA, tweak it and put it into an organism, changing its genetic makeup.

Biologists were talking about making products such as insulin in ways that were safer and more productive than traditional methods. But fears about the technology were building. Would it create new and unstoppable diseases? Could it lead to an era of eugenics? Should scientists tamper with the stuff of life? The Asilomar meeting was called to debate the issues. Valentine had been invited to represent agricultural research.

"It was a big step for a farmer," Valentine said. "There were all these Nobel Prize winners in the front row."

At a loss for a topic for his talk, Valentine was walking along the shore when he noticed seedlings among the sand and leaf litter. Trees had dropped seeds that had sprouted in the winter rains. Valentine knew the trees were leguminous: They had root nodules housing bacteria that fix nitrogen from the air; microbiological factories that supplied this nutrient to the plant. Perhaps DNA technology could be used to transfer this nitrogen-fixing ability to other plants.

Valentine picked an armful of the seedlings and handed them out before his talk, inviting the delegates to examine the nodules. Then he wrote across the length of the blackboard: "Molecular Biology of Farming," walked back and erased the middle words, leaving: "Molecular Farming."

"They loved it," Valentine said.

Back in Davis, Valentine wrote his white paper proposing a nonprofit institute to bring together genetics researchers and plant breeders to work on "molecular farming": applying the recombinant DNA technology discussed at Asilomar to generate new inventions and commercial products.

The institute would have had a degree of autonomy from the university, allowing it to reinvest royalties and overhead monies from grants directly in research, said Charley Hess, dean of the College of Agricultural and Environmental Sciences at the time.

But the university's response was cool.

"I was told the administration consensus was that it was not relevant to agriculture," Valentine said.

Then, in 1980, two things happened. Congress passed the Bayh-Dole Act, giving public universities the freedom to protect intellectual property arising from federally funded research and spin it off to existing companies or start-up enterprises. And Norm Goldfarb went to see Ray Valentine.

When Goldfarb, scion of a family firm that had funded such start-ups as Genentech and Apple Computer, knocked on Valentine's office door, he "wasn't spoiled by knowing anything" about agriculture, Valentine said. But Goldfarb did know he wanted to start a company. He thought that biotechnology had a bright future, and he knew UC Davis was a powerhouse in agricultural research.

Goldfarb and Valentine began meeting on Saturday mornings, with Valentine tutoring Goldfarb in biology and genetics and Goldfarb talking about economics and financing. Within a few weeks, Goldfarb had quit his job at Intel and was ready to start his new company, Calgene. Valentine became vice president for research and development and formed a science advisory board from fellow scientists and other faculty members.

Calgene began working on genes for herbicide resistance. Eventually, this work would lead to genetically modified crops resistant to the broad spectrum weed-killer Roundup. Marketed by Monsanto, which purchased Calgene in 1996, Roundup-resistant crops such as soy beans, cotton and maize are now planted on millions of acres in the United States.

But that was a long way away in 1981, when Calgene's researchers first began applying recombinant DNA technology to crop plants.

"Calgene was really the first ag biotech start-up. They had to do fundamental research that had already been done in the biomedical field," said Roger Salquist, Calgene's CEO from 1984 to 1996.

Meanwhile, some on campus and in the community were raising questions over perceived conflicts of interest between professors' commitments to the university and to private companies and about the possible negative influence on the campus.

"The main point of contention was whether someone working in a university who makes findings should then start a business with the benefit of public funding," said Emanuel Epstein, professor emeritus of plant nutrition, who expressed concerns at the time.

Some professors were also worried that graduate students' work might be diverted to benefit a company, that companies paying higher salaries than academia would lure away promising researchers and students, and that potentially valuable work could be bottled up by a commercial sponsor.

According to Valentine, some faculty associated with the state-funded Agricultural Experiment Station believed Calgene was undercutting their role by doing applied agricultural research. Others resisted the entire concept of product-oriented research, whether carried out by the experiment station or by Calgene. "I also have to say I believe it was fueled to some extent by faculty attitudes about Ray," Hess said. "He is a master at communicating science, but sometimes that was seen as 'blowing his horn.'"

Reflecting, Valentine also thinks he got on the wrong side of some faculty in the college.

"When you move fast, you don't have time for politics," he said. "We were like two bulls in a china shop. Norm could not imagine that there would be any impediments and was amazed not to get the red carpet treatment from the university."

The issue came to a head when a group of faculty, including Valentine, won a $2.5 million grant from the Allied Chemical Corp. to study biological nitrogen fixation. But Valentine was also an investigator on a major National Science Foundation grant in the same area. And then it emerged that Allied Chemical had bought a 20 percent stake in Calgene. Valentine's connection to Allied Chemical through both Calgene and as a university investigator did pose a real conflict of interest, because it appeared that work done on university time could be transferred to Calgene, Hess said.

"Although I had confidence in Ray, it was not uniformly shared by our faculty, and certainly the folks in the state legislature and in Congress were convinced they knew a conflict of interest when they saw it," Hess said.

At the time, UC was engaged in a lawsuit with Genentech over rights to technology that the university claimed had been developed at UC San Francisco and improperly acquired by the company. (The lawsuit was settled in 1999, 20 years after the work in dispute was carried out.)

The controversy was also attracting wider attention. California Rural Legal Assistance, a local activist law firm, delivered a report to the state Fair Political Practices Commission naming several UC Davis professors as having conflicts of interest because of their consulting work with industry. Worried about the appearance of a conflict of interest, Hess told Valentine he would have to choose between Calgene and his role in the Allied Chemical grant. Valentine pulled out of the research grant and resigned his position in the Agricultural Experiment Station, keeping his faculty position and his role on Calgene's science advisory board.

Valentine feels that matters settled down after that. Hess drew up proposals to strengthen rules on conflict of interest. In 1982, Hess testified before Congress as part of a hearing on ties between university faculty and private industry. He recalls some particularly sharp questioning from a Tennessee representative named Al Gore.

Gradually, the academic community came to appreciate that Calgene scientists were doing high-quality research, publishing it in top journals and interacting with campus colleagues, Valentine said. But there was still more uneasiness about corporate links at UC Davis than at some other campuses, he said.

While Salquist says the controversy had little adverse effect on Calgene, describing it as "dysfunctional babble," he's sure the row dissuaded other faculty from similar ventures.

If the Calgene experience had gone more smoothly, it might have opened more opportunities for UC Davis faculty to start companies, Valentine said. "It was not a comfortable situation back then. The campus has changed a lot since," he said. •

(Read more about the significant shift in attitudes regarding the commercialization of research -- from the perspective of both the campus and funding agencies -- when this story continues in next week's Dateline.)