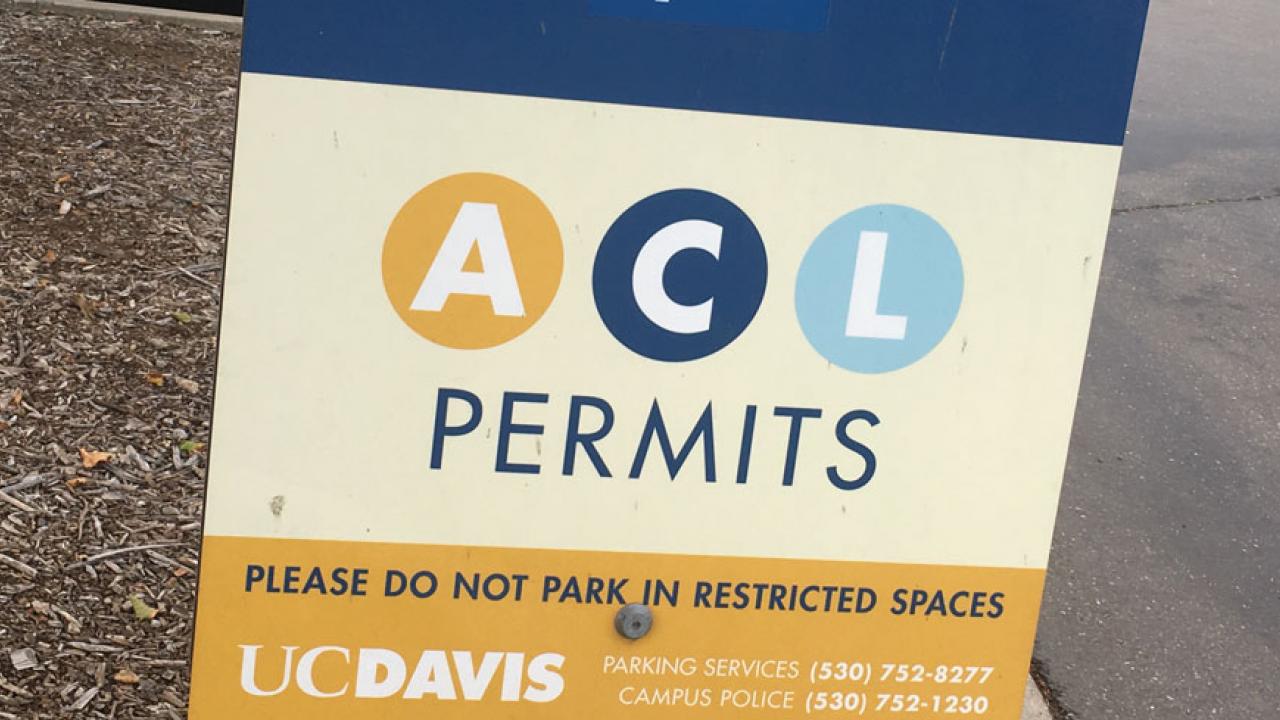 The annual parking permit renewal process is underway, bringing with it rate increases effective July 1 for many permits including the most popular, A, C and L.

There will be no rate increases for carpoolers’ or vanpoolers’ permits, as a reward for staff, faculty and students who choose to ride together, “and to encourage others to explore these mode-share options,” Cliff Contreras said in his annual director’s letter from Transportation Services, or TAPS.

Nor will there be a rate increase for the daily visitor permit (VP). It has been set at $9 since a $1 rate increase in July 2014.

But TAPS has not raised other parking rates for three years, and Contreras said the reason behind the increases for 2017-18 is clear: “We can no longer defer investments in our infrastructure and services that are necessary to provide our community a safe, convenient, reliable and sustainable transportation program.

“TAPS’ operating and maintenance costs (salaries, benefits, debt service, campus cost agreements, assessments, etc.) are under the same pressure as those of other units across the university.”

The rate increases for long-term, monthly permits (six months or more) range from $1 a month for an N permit (night) to $5 a month for a V permit (vendor). Here are some of the new rates:

See all the new rates here.

When posted originally, this article incorrectly stated permit holders need take no action if they wish to keep their same permits and payroll deductions. In fact, the “take no action” provision applies to only some permit holders. Here is the correct information:

If you have a multiyear permit, specified by the suffix "MY," as in AMY, CMY, 2LMY, 30LMY, HGLMY, RLMY or NMY, the renewal process is simple: You need take no action, provided you wish to maintain the same permit and payroll deduction.

All other permits are annual and need to be renewed. Check to see if you are eligible to use the TAPS online renewal system, and, if so, you have only until this Thursday (June 1) to use the online system. If you’re not eligible to use the system, or if you miss the June 1 deadline, you should visit TAPS (in the Transportation and Parking Services Building) to take care of your renewal, or call TAPS at 530-752-8277 for further instructions.

To change your permit or cancel:

New insect-collecting permit rules proposed by the state Department of Fish and Wildlife are not only “onerous and obtrusive” but will “obstruct the scientific work of researchers and teachers,” says entomologist Lynn Kimsey, director of the Bohart Museum of Entomology and professor of entomology.

The proposed rules, she said, “amount to a mind-boggling, data-clogging nightmare.”

“This is a major deal for scientific teaching and research,” Kimsey emphasized. “Teachers who assign their students to make insect collections will now have to apply for a permit, and only eight persons are allowed on any one permit. Plus, they have to notify California Fish and Wildlife 48 hours in advance before they collect, and inform them what exactly they will be collecting. It doesn't matter what they’re studying — cockroaches, wasps or corn ear worms.”

The campus is making changes to its International Student Administrative Fee for international undergraduates to help fund more extensive services and programs.

The fee, which has not been raised since it was introduced in 2009, has supported a variety of services for international students, including student visa assistance, advising and programs to help them integrate into academic life.

Services for International Students and Scholars will use the additional revenue to reduce its student-to-advisor ratio, improve services and programming, and pay for costs to meet expanding and increasingly complex government regulations and reporting requirements.

The unit of Global Affairs provides services and programs for international students, whose numbers have grown from 2,346 in 2009 to 6,266 in 2016. It also serves 2,200 international scholars; departments pay for services provided to them.

More detailed information on the fee and changes is available on the website of Services for International Students and Scholars.

A reported case of sexual battery last week involved an unidentified man who groped two women after he had approached them and a third woman, and displayed what appeared to be a toy gun, campus police said.

The women said they refused the man’s order to lift up their shirts, and that’s when the groping occurred, according to police. The victims sustained no physical injuries, police said, in the incident that occurred at about 2:10 a.m. May 25 on the Dairy Road bike path on the east side of The Pavilion.

The man took one of the women’s cellphones and ran off after another one of the women started to take a photo of him, police said. Officers said the man fled north toward the Activities and Recreation Center and remains at large. Police recovered the stolen cellphone on a nearby sports field.

A crime alert described the man as follows: white, early 20s, 5-foot-9 and skinny, with short black hair, maybe one-quarter to one-half inch in length, as if he were growing his hair back from a shaved head. He was wearing a white T-shirt with long, black sleeves; and black jeans; and carrying a navy blue, drawstring-type backpack. The alert described the apparent toy gun as “small, black and shiny.”

Anyone with information about this or similar incidents is asked to call campus police, 530-754-COPS (2677). See the crime alert for safety tips.

Utilities workers said today (May 30) they will turn on the Davis campus’s new water supply — a surface water supply from the Sacramento River by way of a treatment plant that already serves Woodland and Davis — as early as Monday (June 5).

By the end of the first week, upwards of 250 gallons a minute could be flowing toward campus taps.

The campus has an allotment of 1,250 gallons a minute, but officials are in no rush to get there. For one thing, the campus still has deep wells that provide quality water.

Second, facility managers will be closely monitoring how the new water reacts to the campus distribution system. They’ve taken steps to guard against corrosion — by flushing the pipes and by adding a corrosion inhibitor regularly — but still the managers want to make sure.

The surface water is naturally “softer” than the campus’s groundwater, so water softeners may no longer be necessary, and many people say the surface water tastes better.

What the new water supply means for labs:

If you have concerns about the water (e.g., pressure, taste, color, odors), contact the Facilities Management Customer Support Center by email or phone, 530-752-1655.