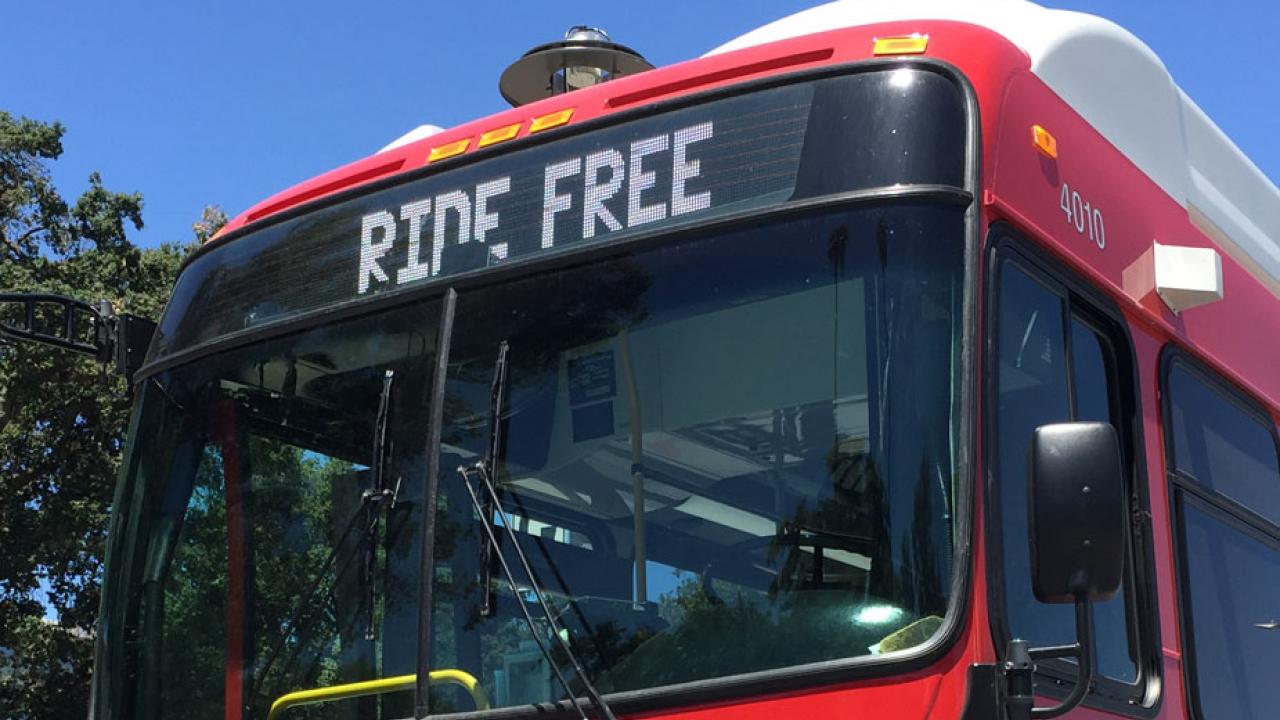 So far this year, Unitrans has done its part to “Spare the Air” 19 days, waiving fares for all passengers. Unfortunately, Unitrans can no longer spare the expense and will discontinue the free-ride program from Monday, Aug. 27, through the end of the year.

“With the high number of wildfires this year, Davis and the surrounding area have experienced an unprecedented number of Spare the Air days, more than Unitrans anticipated in its annual budget,” said Jeff Flynn, general manager of the UC Davis and city transit system, which is operated by the Associated Students of UC Davis.

Unitrans is one of the last transit systems in the region to provide free rides on Spare the Air days. Free rides are meant to encourage people to leave their cars at home on days when the Air Quality Index hits 126 in the range of “unhealthy for sensitive groups.”

“The program, though, has not resulted in higher transit usage,” Flynn said. Nevertheless, he said, Unitrans will bring back free rides on Spare the Air days for a limited number of days in 2019 with the hope that more people will take advantage. “With fewer cars on the road, we’ll have a lessening of greenhouse gas emissions,” he said. “Not only that, but most of our buses run on natural gas, which burns cleaner than diesel.”

One week after crews returned to campus from the front lines of the Ferguson Fire, a separate crew of UC Davis firefighters was on the road to another wildfire.

That incident, which is actually two separate fires, is a total of 405,000 acres and 74 percent contained as of this morning (Aug. 21), the U.S. Forest Service said.

A bear cub who was treated by UC Davis and California Department of Fish and Wildlife veterinarians after being burned in the Carr Fire is recovering well, that state agency said.

"The bear is spunky and very wild, either bluff charging or running away from staff when it’s time for treatment," the Department of Fish and Wildlife said in a Facebook post, noting the behavior is a good sign.

The cub was the third bear ever to receive bandages made from sterilized fish skin — a treatment developed by Jamie Peyton, chief of the Integrative Medicine Service at the UC Davis Veterinary Medical Teaching Hospital. Read more in this Aug. 13 article.

Design and Construction Management announced the start this week of $1.7 million worth of road and pavement improvements and related work on the west side of the main campus, including La Rue Road and Hutchison Drive.

Medical center among best of the ‘Best’

U.S. News & World Report’s “Best Hospitals” for 2018-19, released last week, declare UC Davis Medical Center to be one of the best of the best: No. 1 in Sacramento and No. 5 in California (and the only Sacramento hospital in the top 10). The annual rankings are based on hospitals’ treatment of patients with serious and challenging injuries and illnesses.

The latest payroll data, along with a summary analysis, is available online. UC officials pointed out that employee compensation at public institutions like the university is considered a public record under the California Public Records Act. UC personnel policies — PPSM-80 for staff and APM-160 for academic appointees — specify the information (such as name, position title and salary) that, in general, the university shall release upon request.

At UC Davis, questions about access to payroll data may be directed to Jana Gabby, information practices coordinator, by phone, 530-752-8715; or by email to the Public Records Office.