By Dateline Staff on September 23, 2019 in University

He and two colleagues, Dennis J. Slamon and Axel Ullrich, shared the Lasker~DeBakey Clinical Medical Research Award and a $250,000 honorarium for their groundbreaking development of the drug Herceptin, a lifesaving therapy for women with HER2-positive breast cancer. The Albert and Mary Lasker Foundation honored the trio at a ceremony in New York City. 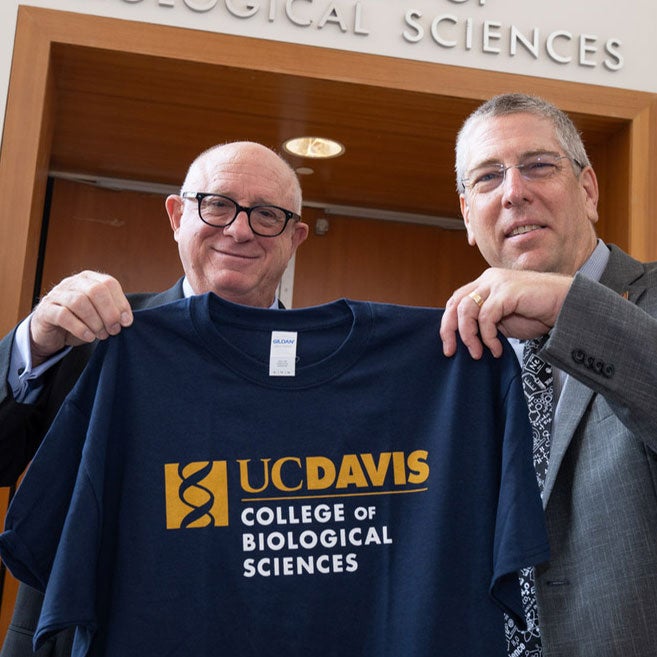 Read more about Shepard and his work in this feature article on the College of Biological Sciences website. Photo shows Shepard, left, with Dean Mark Winey, on Shepard's visit to campus one week after he received the Lasker Award.

Shepard (now at BetterOutcomes4Cancer) and Ullrich (now at the Max Planck Institute of Biochemistry) conducted their Herceptin investigations at Genentech, while Slamon did his at UCLA, where he continues to work as a physician and scientist.

They demonstrated that monoclonal antibodies — proteins that bind to specific invader organisms or abnormal (cancerous) cells — were a viable and effective strategy to treat solid tumors, opening a new path to develop and deploy antibodies to treat cancer. Clinical results showed that Herceptin, when coupled with chemotherapy, stalled HER2-positive breast cancer progression and extended survival compared with chemotherapy alone.

The Food and Drug Administration approved Herceptin in 1998. According to the Lasker Foundation, more than 2.3 million women have been treated with the drug to date.

UC’s Central Travel Office is bringing its fall roadshow to UC Davis next week, and the campus accounts payable team will join in to share best practices for booking via AggieTravel.

The Central Travel Office is taking its roadshow to all the campuses, and people who attend will be entered in a contest to win two United Airlines tickets for travel within the United States (terms and conditions are posted online).

The Department of Agricultural and Resource Economics announced that its Master of Science and Ph.D. are now classified as science, technology, engineering and math, or STEM, degrees, joining the undergraduate major in managerial economics.

“This occurred through changing the program’s Classification of Instructional Program (CIP) code with the U.S. Department of Education’s National Center for Educational Statistics to reflect the rigor of the graduate degrees in quantitative methods,” the department said in a Sept. 16 post.

This new STEM designation, besides supporting the already highly competitive graduate program, may help students studying in the United States on F-1 visas, according to the post.