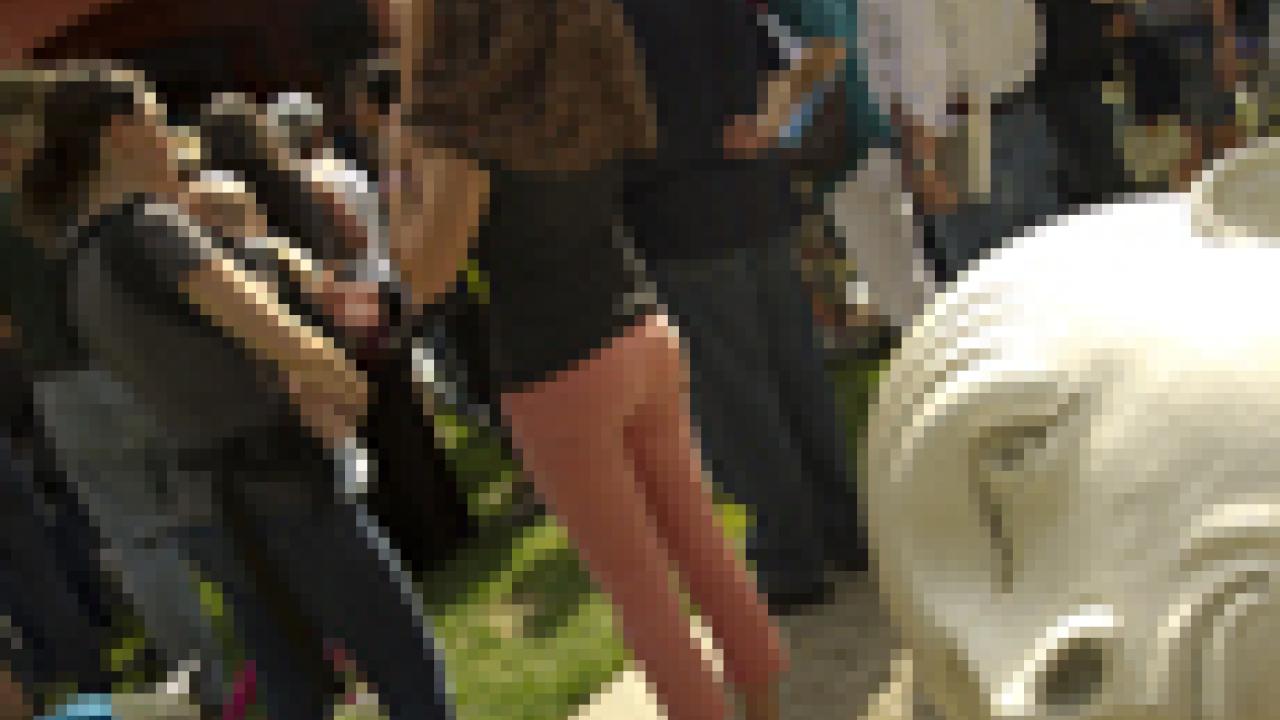 No one could have sculpted or composed a better day:

The campus’s Egghead sculptures — by the late Robert Arneson, longtime professor of art at UC Davis — as eye-catching and thought provoking as ever, under a sunny sky with a temperature in the mid-70s (in late winter!).

And original music by UC Davis composers, each of whom wrote a piece for a particular Egghead or two.

Throw in members of the esteemed St. Louis Symphony, here for a three-day residency, and you have the makings for the first Egghead Music Walk, held the afternoon of March 15. A n estimated 200 to 300 people comprised the audience at each stop along the way, culminating with a reception at Stargazer, near Dutton Hall.

Organized by the Mondavi Center for the Performing Arts, the walk showcased two of UC Davis’ strengths: the legendary art department and a music composition faculty rich with talent.

“If you think of the statues you see on many university campuses, they are usually serious and solemn and noble,” said Don Roth, the Mondavi Center’s executive director. “There is something very ‘Davis’ about the Eggheads — truly great art, but with a bit of a smile and a wink.

“I knew the work of this great Davis artist would be inspiring to our wonderful UC Davis composers.”

In writing her piece for Bookhead — the Egghead with face buried in a book in front of Shields Library — San Martin “tried to capture the idea that there’s a story that’s going through (the music), and against it there’s all these other things that are trying to get in the way” — as in life, she said in a videotaped interview with San Francisco Classical Voice.

She inserted these interruptions “as this vertical sound, sort of something to grab your attention, like the opening of the Fifth Symphony of Beethoven.”

San Martin ended up with Tiny Font, a string quintet for string quartet plus bass, “trying to sort of capture that glimpse of being in engaged in a story and things happening around you.”

Nichols, in a separate interview with San Francisco Classical Voice, described his choice of instruments for the trio Portrait of the Artist (detail): piccolo and double bass, which “are very easy to hear outdoors,” and, in a nod to Arneson’s “gently anarchic spirit,” a prepared piano (meaning that various objects are inserted in the strings to create unusual sounds).

“I thought it would be fun to involve the piano and have it be a prepared piano, as kind of a slightly subversive thing to do in an outdoor event,” Nichols said.

Make that “gently subversive,” he added, “because, of course, this is an event that really is also about welcoming the community on campus.”

Arneson joined the art faculty in 1962 around the same time as Roy De Forest, Manuel Neri, Wayne Thiebaud and William T. Wiley — all five of them among the most significant artists ever to live and work in Northern California. Wiley stayed for a decade, the others more than twice that long, Arneson until his death from cancer in 1992 at age 62.

They would change the nature and perception of art in California forever.

“During his lifetime, Robert Arneson was the epicenter of an earthquake that helped shift the foundation of the art world and brought the medium of ceramic sculpture into the mainstream artistic realm,” said Professor Annabeth Rosen, who holds the Robert Arneson Chair in Ceramic Sculpture.

So, whereas ceramic work had been functional — as pots, vases, plates and tiles — Arneson and others began experimenting with the medium in different ways to create art that later became known as Funk Art. His work and that of his contemporaries is found at museums throughout the world.

Prominent alumni of the art studio program include David Gilhooly, a Funk ceramic sculptor and student of Arneson’s known for, among other things, his depictions of frogs and other animals; Kathy Butterly, winner of the 2012 Smithsonian American Art Museum’s 10th Contemporary Artist Award; and Dutch artist Nelleke Beltjens.

The music department has some stars of its own, including graduate student Will Cooper, winner of the Leo Kaplan Award — the top prize — in the 2012 Morton Gould Young Composer Awards, given by the American Society of Composers, Authors and Publishers Foundation.

Rosen praised the opportunities that UC Davis provides for students to be exposed to the arts: “The arts in education are vital to the institution’s thriving, rich and stimulating daily life. Inasmuch that it may not just be the art and music classes one takes, but a way of looking, a way of understanding, as a means to grasp a better sense of the world around us.”

The Egghead Music Walk, of course, proved her point, as students, faculty, administrators and the general public joined the stroll. It also hit a high note with Ortiz, a longtime advocate of public access to opera, symphony and other music.

Ortiz, the Jan and Beta Popper Professor in Opera, said the Egghead walk “brings together UC Davis’ glorious past and everything we have today.”

The Eggheads and accompanying music from the Egghead Music Tour:

The Eggheads (including a walking tour)