Memorial Day in Words and Photos

UC Davis’ early Memorial Day observance last Thursday (May 25) started with a crowd of about 200 people on the Memorial Union’s North Courtyard and ended inside the MU with people crowding around the campus’s new memorial wall honoring fallen Aggies. 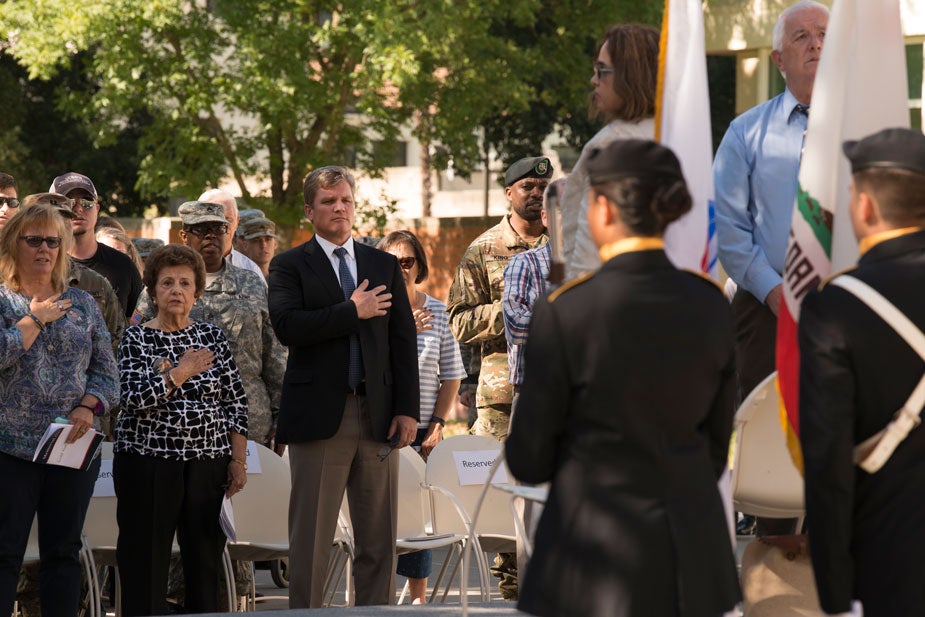 The ceremony included remarks by Adela de la Torre, vice chancellor, Students Affairs and Campus Diversity; and Phil Knox, retired staff, who as the campus’s veterans program coordinator in the mid- to late 1970s, added UC Davis’ Vietnam War casualties to the Golden Memory Book — which has a biographical page for each fallen Aggie dating back to World War I. 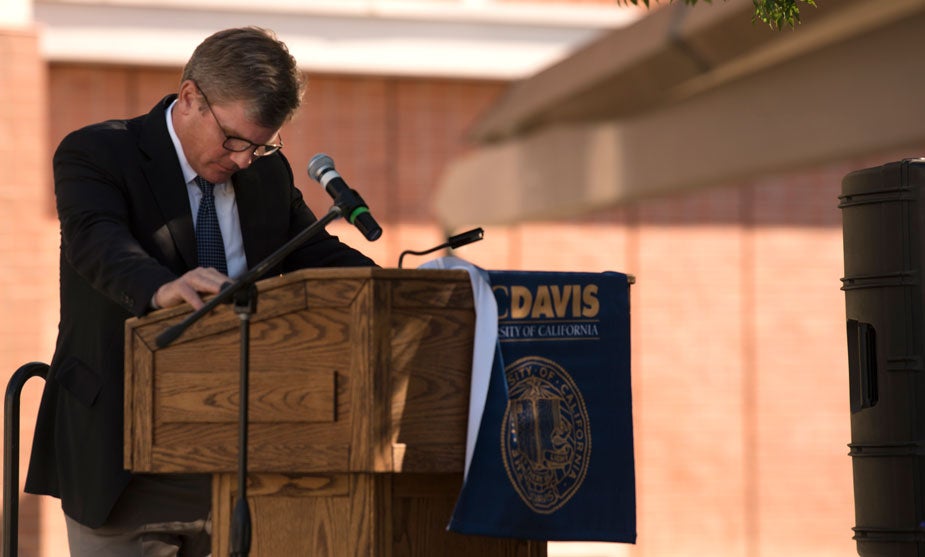 Brian Bohlig talks about the father he never really knew, having been 5 months old when his dad, Marine Corps 1st Lt. James R. Bohlig, went to Vietnam in 1969.

“My father graduated from UC Davis in 1966. While he was an Aggie, he played rugby, studied a bit and met my mother, Lenore, during his sophomore year. They got married their senior year, and shortly before graduation he joined the Marine Corps. He eventually got his wings and became a fighter pilot. He was proud to be serving his country, loved the camaraderie of the Marine Corps and could not get enough of flying really fast planes.” 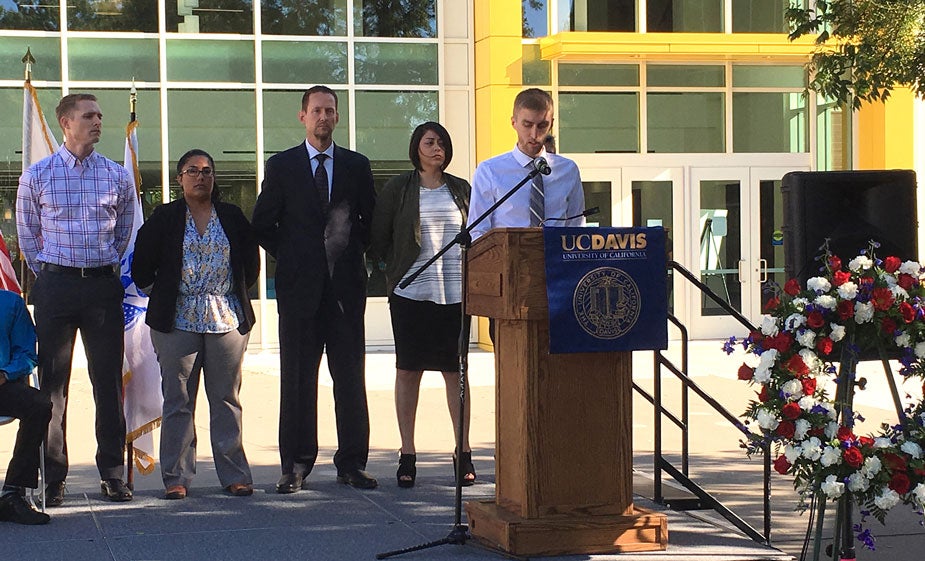 Student veterans read the names of the 135 known Aggie casualties.

“In early 1969 he was deployed to Vietnam with his squadron. My mother was 25, my sister, Colleen, was 2 1/2 and I was 5 months. On the night of August 19 of that same year, after an afternoon of barbecuing steaks over jet fuel with his buddies from the squadron, he volunteered for a bombing mission and never returned. He along with his back-seater are still missing. My mother never remarried.” 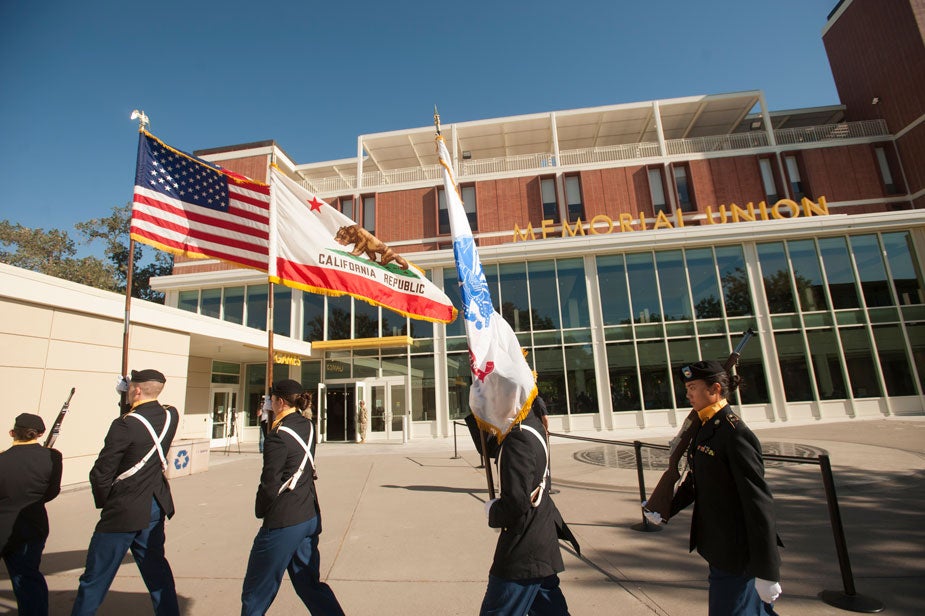 Army ROTC color guard leads the way into the Memorial Union, for the conclusion of the Memorial Day Ceremony. The MU, dedicated in 1955, is a memorial to Aggies who died in military service. 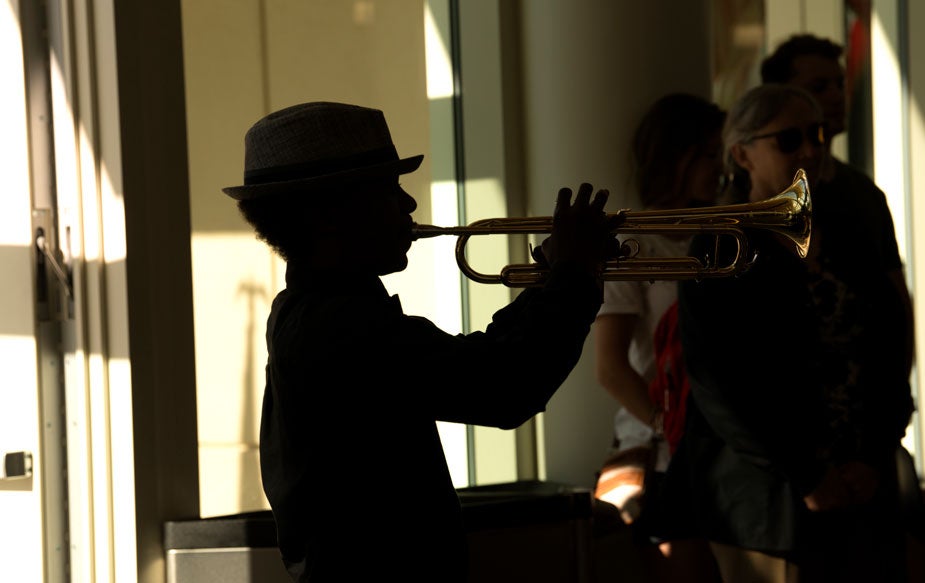 Student plays taps outside the MU — and the notes envelop the crowd at the Gold Star Aggies Wall.

While growing up, Bohlig said, he always felt different being the son of someone who was missing from the Vietnam War, and he never came up with a good answer to the question, “What does your father do?” He said he was a senior in college before he began to ask more question about his father and talk more openly about him with others. (He said he almost came to UC Davis, but went to Dartmouth instead.) “Since then I've had the opportunity to mentor children who’ve lost a parent in Iraq and Afghanistan, I’ve become good friends with some of the men who flew with my father in Vietnam. I even went to Vietnam to visit Chu Lai where he was stationed during the war.” 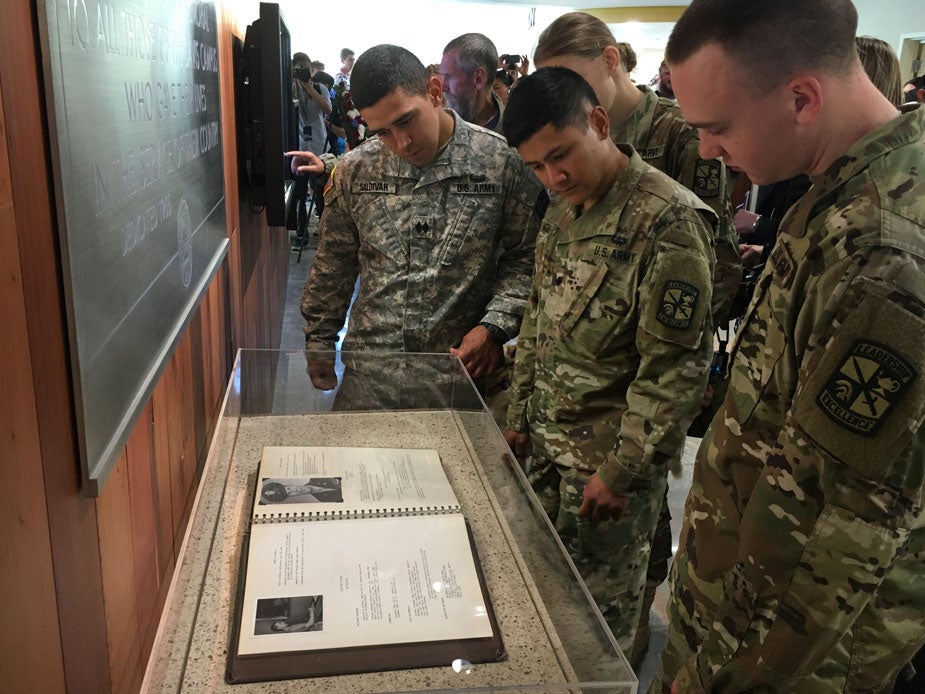 Army ROTC cadets crowd around the Golden Memory Book at the Gold Star Aggies Wall. The page on the left is James R. Bohlig’s.

“Also along the way I got married to an amazing woman, had three great children and got to live the life my father never had the opportunity to live. And that is why memorials like this are so important, because it is too easy to forget the sacrifice of those lost in war. We owe it to these men to honor their memory, the ones who answered the call of duty and paid the ultimate price. So, thank you for inviting me here today and letting me share the story of one of the 135 Aggies. It really does mean a lot to me and my entire family.” 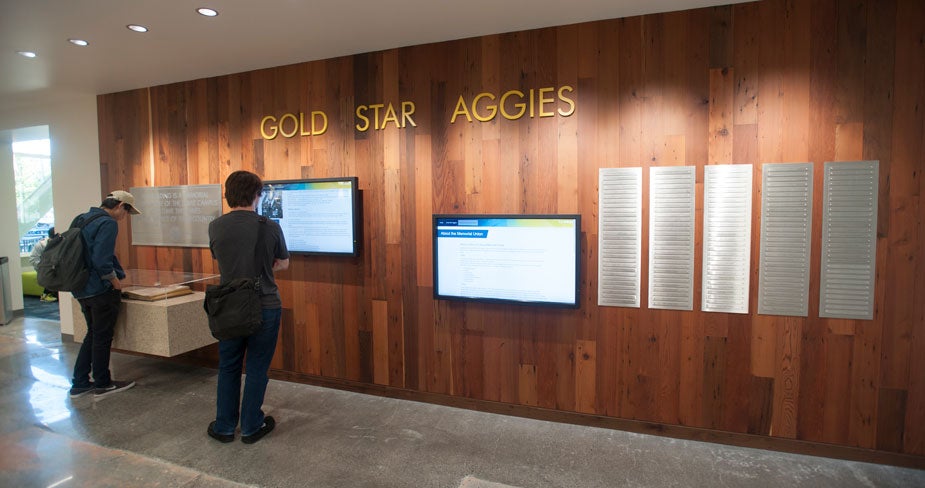 The Gold Star Aggies Wall: Visitors will find fallen Aggies’ names listed on the right, and touch-screen monitors for the viewing of pages from the Golden Memory Book.