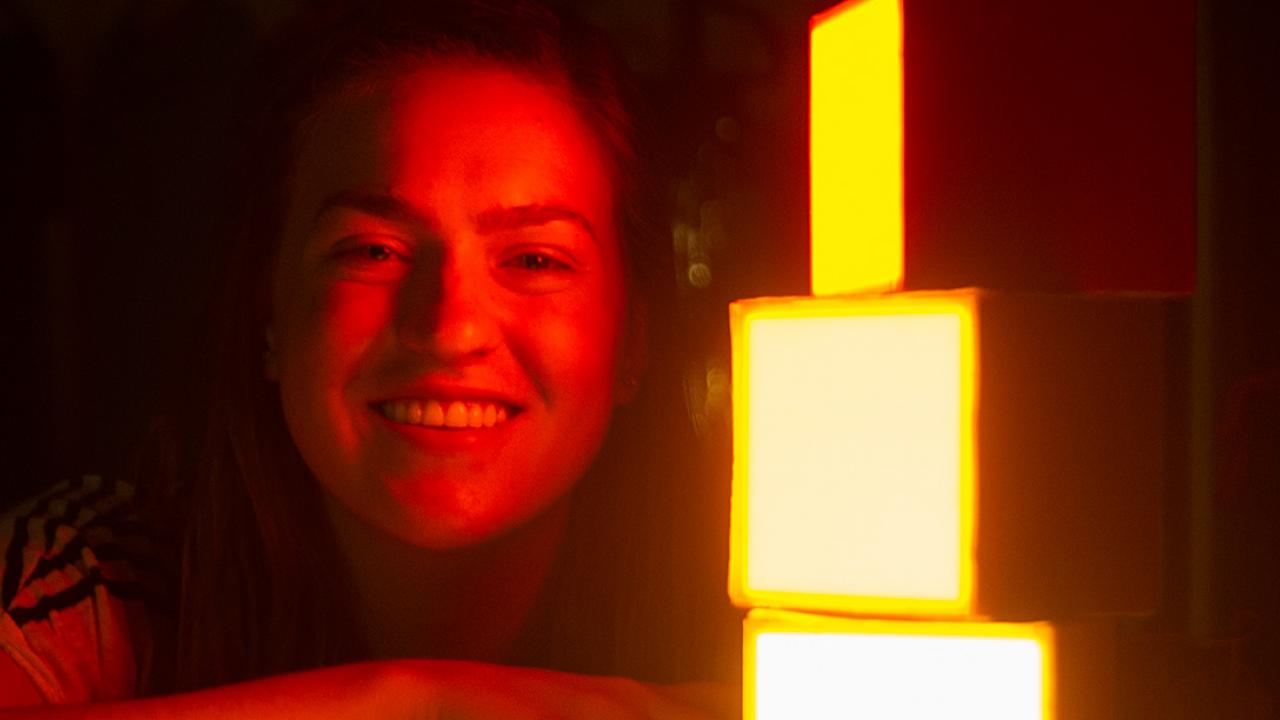 Lighting the Way to a Future Career

In most classes, coursework involves sitting in front of a computer. But in February, students in professor Michael Siminovitch’s “Design with Light” class are hard at play. They’re using their hands and their imaginations to devise what could become the next big thing in lighting.

It’s just a few weeks to the California Lighting Technology Center’s 11th annual Luminaire Design Competition, in which classmates compete against each other to create a luminaire from a lighting kit contributed by a partner in the lighting industry.

This year, the kits contain organic light-emitting diodes from Acuity Brands. OLEDs are thin, lightweight, dimmable, cool to the touch and energy-efficient. Many in the industry consider this emerging technology the future of lighting.

“Literally, the future is happening in this class,” says Siminovitch, director of CLTC at UC Davis and a professor in the  Department of Design. “All the ways we light spaces — in our hospitals, residential housing and commercial business — it will all be this type of lighting.”

The competition’s winner will go to the Lightfair International Tradeshow and Conference, an annual lighting and technology showcase for the industry, to be held this May in New York City. Past winners have had multiple job interviews while attending Lightfair. Most enter lighting careers.

Although a competition, this is no Cutthroat Kitchen. The fact that they’re competitors rarely seems to cross these undergraduates’ minds. Instead, they often help each other improve their designs.

“We all work together,” said Sally Chae, a fifth-year double-major in Spanish and design, who grew up playing violin and is working to design better music-stand lighting. “It’s been very harmonious, in a sense.”

“The play instinct — I’m feeling that distinctly from him,” says Chae of Siminovitch. “He gives us a lot of room to play with the materials, and he just checks in. I feel so much freedom; it’s not restricted.”

And play — or perhaps more accurately, experimentation — is an integral part of the design process, which is, at heart, a problem-solving method.

‘Literally, the future is happening in this class.’

The task is lighting

The shape and lightweight characteristics of OLEDs provide infinite possibilities for task-lighting design, which is the focus of the competition’s assignment: To explore design of light in the near environment. Task lighting is more about lighting up a book than a parking lot.

In developing his concept, senior design major Ryan Fong sat down in a chair with a piece of paper one day and wondered, “What if I could read this paper without turning on the light?”

So he designed lighting for a chair that would let him do just that. Panels of OLEDs extend from behind the chair to light the space of whoever is sitting in it. If the chair moves, the light moves with it.

Similar to being in a real design studio

‘I like this because you have one assignment for the whole quarter: Make something that does something and looks good. That’s actually really hard.’

Fong says the process he’s gone through for this competition feels similar to what he imagines happens in a real design studio: Imagine, create, scrap, imagine, create … and maybe send to market.

“I like this because you have one assignment for the whole quarter: Make something that does something and looks good,” says Fong. “That’s actually really hard.”

Competitive spirit in a dark room

March 12, 2015: It’s the day of the competition. The room is dark save for the light of the students’ designs and the slides from their presentations.

Students are smartly dressed and composed, yet nerves are palpable.

Judges and classmates sit together as one idea after another is unveiled: a desk lamp, a child’s night light, a new take on the makeup mirror light. Their designs play to OLED’s strengths: They’re sleek, thin, customizable, multifunctional.

“The students were able to get the essence of what is so special about OLED,” says judge Peter Ngai, vice president of OLED lighting at Acuity Brands.

“Most light sources are bright and glare and are harsh. You don’t want to look at it. You want to be at arm’s length. OLED is exactly the opposite. Light is not just a bright source you want to get away from. OLED is something you can actually get close to. You want to celebrate the light.”

Judges could be talking to a future hire

The judges ask questions, offer encouragement. After all, they could be talking to one of their future hires.

“This type of class and the competition is an important vehicle to attract new potential talent to this industry,” Ngai said.

And the winner is…

While designs range from a red light-up plate that adds a fun factor to cocktails and sushi, to a “Note Light” — essentially a light-up Post-It note — the top winning design was a simple T-shaped task light from U Teng Long, a senior and double major in design and economics.

“I was really surprised,” Long says of winning. “I actually had left because the competition ended late, and I had another final. My friend texted me and said, ‘Hey, you won!’ And I drove back.”

“Even for those who didn’t win, all these lighting designs become banner pieces in portfolios for the students,” Siminovitch says. “I want to see portfolio pieces; I want to see people go on to job interviews. It’s not just about who wins this. Everybody wins in this class.”